Streaming into the future 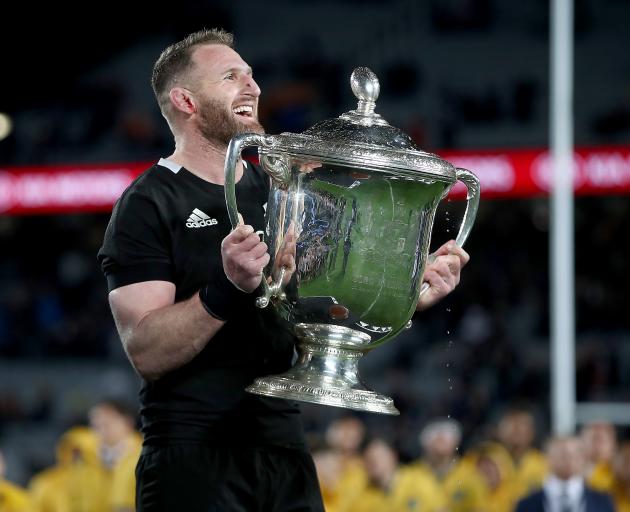 Most New Zealanders that watched Kieran Read lift the Bledisloe Cup did so the old fashioned way, on the tele. Photo: Getty Images
Of the many sets of statistics produced after the (pleasingly) one-sided Bledisloe Cup rugby test last weekend, one jumped out to anyone with even a casual interest in the future of television content delivery.

That suggests, despite many proclamations to the contrary in recent times, rugby - while perhaps having lost some of its ability to "grip the nation" - is still by far the No 1 sport to follow in New Zealand.

Just 55,000 streamed the game through the Sky Sport Now or Sky Go platforms.

That paints a clear picture of how New Zealanders like to consume live sporting events: the traditional way. Turn on the telly, flick to the appropriate channel and watch high-definition sport beamed in from a satellite or UHF signal.

We clearly do not yet have a huge appetitite for streaming sport over the internet. And, when you look at the issues experienced by both Sky Go and Spark Sport in recent times, it is no wonder.

Both have been plagued with issues around picture quality and delivery, audio glitches and, in some cases, full meltdown, sending fans on to social media in states of mild to major frustration. Just this week, Spark conceded that it was advising subscribers to its Rugby World Cup package that some HDMI cables - viewers need one if they are accessing the games by connecting laptops to televisions, unless they have Chromecast - would not work because they could be mistaken for recording equipment.

As Chris Keall adroitly put it in the New Zealand Herald: "Spark is discovering that the world of international sports broadcasting and streaming has a lot of moving parts - and that its subscribers expect it to manage them all and are not particularly sympathetic to excuses that blame others."

Streaming sport is now commonplace in many parts of the world, thanks to super-fast broadband and improvements in infrastructure. And Sky is clearly committed to the format, having just bought online streaming service Rugby Pass for $62million.

But digital delivery is not necessarily the magic bullet. Live sport - such a major plank in the success of broadcast companies like Sky - has to be delivered faultlessly, or the viewers will vote with their remotes.

The jury is still out on what will happen during the Rugby World Cup, especially as there is so little time left for Spark to iron out mistakes ahead of the first major sports tournament involving New Zealand to screen via streaming.

How deflating, in 2019, to read of exclusive clubs that contain members doubling down on making hateful comments.

The Nelson Weekly reports the male-only Nelson Club has refused to vote on an amendment to its laws that would ban hate speech on its premises while passing a rule that gags members from speaking out.

The move comes in the wake of racist and homophobic slurs by a member, who allegedly expressed anti-Muslim and homophobic views at a public event, and said that black people had lower IQs than white people. Later, the man reiterated those sentiments at a club meeting.

Such views are obviously abhorrent. And if the Nelson Club wants to survive and project an image of something other than an institution well past the use-by date, it needs to act to stamp them out.

Men-only clubs are seen as something of relics of a bygone age, anyway. This sort of thing only emphasises that impression.

This has nothing to do with free speech, and there is little point in listening if that drum is beaten.

Rugby was the National Game. Now, it is Product.

RWC, along with Americas' Cup, are impositions on public funding that no one challenges.