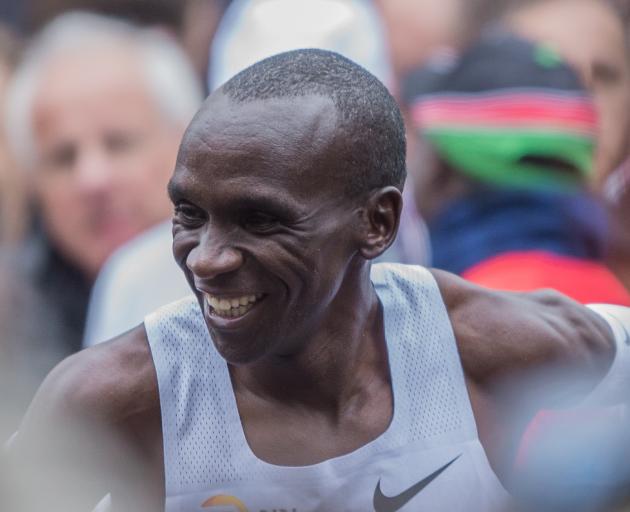 Eliud Kipchoge. Photo: Getty Images.
There are, on the surface, very few similarities between Scott McLaughlin and Eliud Kipchoge, but they both taught us something at the weekend about pushing ourselves to the limit.

One is a 26-year-old New Zealander who dreamed of being a professional race car driver while growing up in Hamilton; the other is a 34-year-old Kenyan who ran 3km to school every day and simply dreamed of a better life.

One is powered around a track by a V8 engine; the other uses his own two feet.

One has to beat dozens of other drivers; the other is effectively in competition with his own physical and mental capabilities.

To watch both achieve their holy grail at the weekend was to marvel at the strength and spirit required to achieve at the elite level of sport - or anything, really.

McLaughlin, the reigning Supercars motorsport champion, continued his charge to a second crown by winning the sport's greatest race, the Bathurst 1000.

He became the first New Zealander to rule Mt Panorama since his mentor, Greg Murphy, won Bathurst in 2004, and the tears in his eyes at the end proved how much that meant to him.

It is an extraordinary race at the best of times, but McLaughlin's triumph came in epic circumstances. After a series of crashes and laps under the control of the safety car, 160 laps were followed by a winner-takes-all, one-lap dash.

With more experienced rivals pushing him hard, and everything to lose, McLaughlin held firm to win. After 6hr 27min 51sec of shared driving, it came down to a measly six-tenths of a second, and ice in the veins of a New Zealand sportsman whose star is only growing.

On the other side of the world, the wiry - and wily - Kipchoge became the first human to run a marathon distance inside two hours, clocking 1hr 59min 40sec at an event in Vienna.

We have long been used to the sight of runners from Kenya, that bastion of athletic endurance, dominating long-distance races but it still came as a surprise to see Kipchoge grinning and barely sweating after completing a feat many have ranked alongside Roger Bannister's conquering of the four-minute mile.

"We went to the moon,'' he said after the race. Now the question is how much further the human body can be pushed.

Interestingly, both men have also been dealing with the whiff of controversy.

For McLaughlin, it was the sight of team-mate Fabian Coulthard appearing to deliberately slow the chasing pack while a safety car was deployed.

Meanwhile, Kipchoge faced some scrutiny for his achievement as it was done with a rotating team of 41 pacemakers on a hand-picked course and a series of laser beams setting the pace, and will not count as an official world record as it was not set in open competition. It was also seen by some as more of a public relations exercise for event sponsor INEOS, a British chemical company, and shoe company Nike.

We suspect both men will be taking little notice of the critics. McLaughlin is the king of the mountain, delighting all Kiwi motorsport fans. Kipchoge is the marathon man, sending people in his homeland into eruptions of joy. They should enjoy the moment.