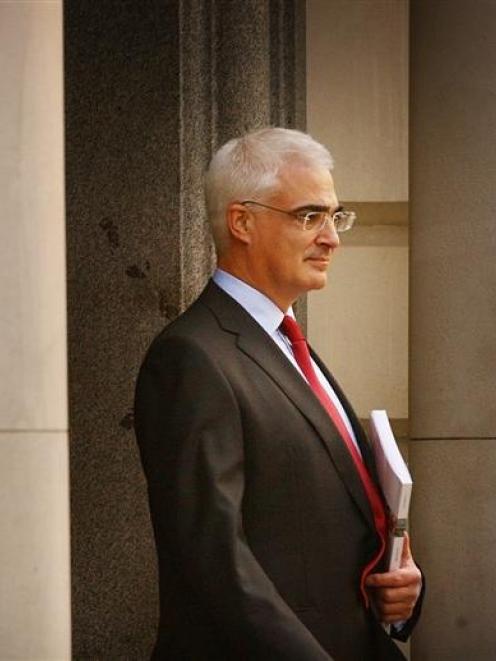 The Chancellor of The Exchequer Alistair Darling. Photo by Peter Macdiarmid/Getty Images.
Britain's air departure tax was originally introduced in 1994, has been adjusted upwards over the years, and varied between passenger classes and destinations, and also became a tax cited for environmental protection purposes - one of the so-called "green taxes".

By this year, the tax had garnered revenue for the British Government in the billions of pounds but was heavily criticised by the airline industry as "theft" because none of the revenue was dedicated for environmental purposes, and it was certainly a disincentive to air travel, particularly the much-favoured short-haul flights in Europe.

In the face of the criticism, the Chancellor, Alistair Darling, warned that the Government would replace it with a new tax levied on a per-plane basis from November next year, to encourage better environmental practices in the airline industry.

Mr Darling kept his promise on Monday, when he announced measures he hoped will keep Britain's economy from deepening into depression.

But his decision will likely have a serious economic impact on this country, as well as Australia, for the new tax is a punitive one and persons travelling the longest distances from the United Kingdom will be hardest hit.

It is curious that five years ago, the same Government decided to ignore a recommendation from a royal commission on environmental pollution to impose strict controls on air travel to prevent global warming.

Mr Darling was then the transport secretary and was outspoken in attacking the recommendation. The commission had concluded that aviation's contribution to global warming would quadruple by 2050.

Mr Darling thought the then proposed green tax would be deeply unpopular with travellers and was a remedy to try to price people off planes.

The new tax will by 2010 add at least $240 per person, per flight, to the cost of leaving Britain for New Zealand, including for tourists and returning New Zealanders.

Travel to New Zealand and Australia will attract the highest of four levels of the tax measured on distance travelled.

Other countries, especially within the European Union, may now decide to follow Britain's lead, with disastrous consequences for our tourism industry.

Prime Minister John Key, fortuitously in London a day or two after the tax was announced, reportedly raised his "significant concern" with the Prime Minister Gordon Brown, and will continue to pursue the matter with the British Government.

Since tourism is now New Zealand's largest foreign exchange earner, and British tourists are the second largest market (after Australia) worth about $1 billion a year to the economy, the Government's concern is appropriate.

Suspicion that the British tax is simply a healthy revenue earner for Mr Brown's government is supported by the absence of much acknowledgement or incentive that some airlines are themselves doing a great deal to reduce carbon emissions.

Air New Zealand is one of the better examples.

Like others operating here, it has helped offset emissions by buying credits and has a voluntary scheme for its customers to become involved; it has ordered eight Boeing 787 jetliners for its long-distance routes, beginning in 2012, that are 20% more fuel-efficient than comparable aircraft, and is actively researching the use of bio-fuels.

There will be justified concern in its boardroom that passenger numbers using its aircraft from Britain may be reduced because of the new charges.

In July, the Ministry of Tourism forecast growth in visitors was expected to hit its lowest level in 10 years this year and growth in the next few years to be almost stagnant.

This in part would be due to slower global economic growth and rising air fares. The industry has also been warning for some time that the age of cheap air travel is over.

But by far our biggest and closest market - Australian tourists - is expected to improve to one million next year.

It is here, and in the domestic market, that any impact of the British impost must be countered while surcharges continue to be an expensive additional cost to long-distance air tickets.

In effect, such "green" taxes are a form of rationing, and are proving to be a disincentive where long-distances are concerned, so air travel on these routes will likely again become the preserve of the wealthy.

The intriguing question Mr Key and his colleagues may soon have to answer is whether an impost on a similar basis is justified on outward-bound long-distance travellers from this country, especially on the national carrier.