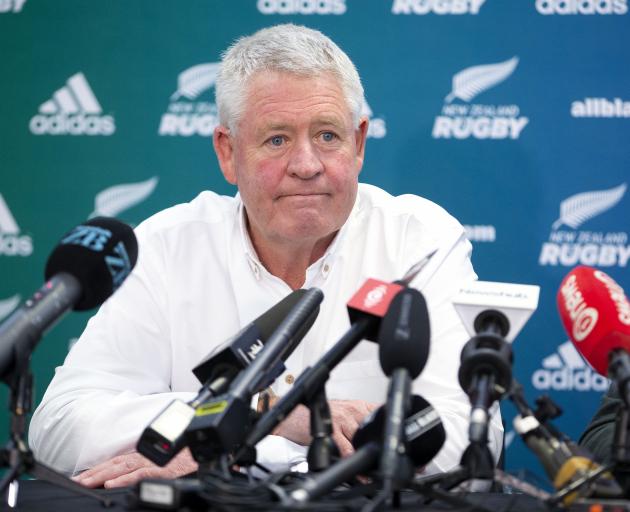 Steve Tew at a press conference to announce his upcoming departure. Photo: Getty Images
How you assess the performance of Steve Tew as New Zealand Rugby chief executive depends on which side of the fence you stand.

Viewed through the high-performance binoculars, Tew - who has announced he is quitting arguably the top job in New Zealand sport in December - has by almost every measure been an astounding success.

He has adroitly navigated the tricky waters of elite professional sport, in a code that still largely dominates an entire country, and can point to a long list of achievements when he walks out the door of the union's Wellington HQ.

Under his watch, the All Blacks have enjoyed a sustained, unparalleled period of dominance, winning both the 2011 and 2015 Rugby World Cups and staying No 1 in the world rankings for nearly a full decade.

New Zealand rugby does not begin and end with the All Blacks, but they are the shop window, and that window has been sparkling in the Tew era, even if Ireland has some claim to top billing following its breakthrough wins.

Tew worked tirelessly to keep the best New Zealand men's rugby players IN New Zealand. The policy of only selecting domestic-based players in the All Blacks is far from the untenable stage but it has certainly got more difficult, thanks to the appeal of the yen and the euro, and Tew has had to get creative with sabbaticals and financial incentives to retain talent. He has, it must be said, done that remarkably well - since Carl Hayman in 2007, which star All Black in his prime has left?

Speaking of the finances, Tew has done his bit to keep a $180million business ticking, though a $1.9million loss last year and looming challenges suggest it is not a bad time to be leaving.

He oversaw a wildly successful Lions tour in 2017 - a record profit for NZR of $33.4million illustrated why that once-every-dozen-years event is so important - and has guided significant investment into everything from digital technology to respect and inclusion programmes.

Tew also helped the women's game grow immeasurably. The world champion Black Ferns are now finally getting annual retainers, the support for the women's sevens team has exploded, and vastly improved resources for the promotion of female rugby have led to a boom in playing numbers.

Bravo, then, to a chief executive who can rightly be proud of where he leaves the top end of New Zealand rugby.

What, though, do the folks of Clyde-Earnscleugh and Lawrence think? Their clubs withdrew from premier Otago Country competitions this season due to a lack of numbers.

What do supporters of schoolboy rugby - bleeding numbers below First XV level - believe NZR has done for them?

How do those few hardy souls who loyally attend their local side's every game in a vastly diminished national provincial championship rate the Tew era?

It is notable that the tributes pouring in for Tew, and his own comments, almost exclusively focused on elite achievement. "Competition structures", "broadcast and content", "international calendar", "global profile" - all worthy topics, but not much there about the grass roots.

New Zealand rugby's success has been built on the classic pyramid model. When the base - schools, club and and provincial rugby - thrives, that flows upwards. And only a blind optimist would say the base is in rude health.

It would be unfair to say NZR has ignored the grass roots in the past decade, but many feel it has not done enough.

Tew has earned respect. There has certainly never been a comparable executive in New Zealand sport, and it seems unlikely another person will survive 12 years running both the professional and amateur wings of our national game.

His replacement faces the challenging task of keeping broadcasters happy, maintaining the success of our elite teams, tackling issues like head injuries and diversity, and regenerating the rugby heartland.