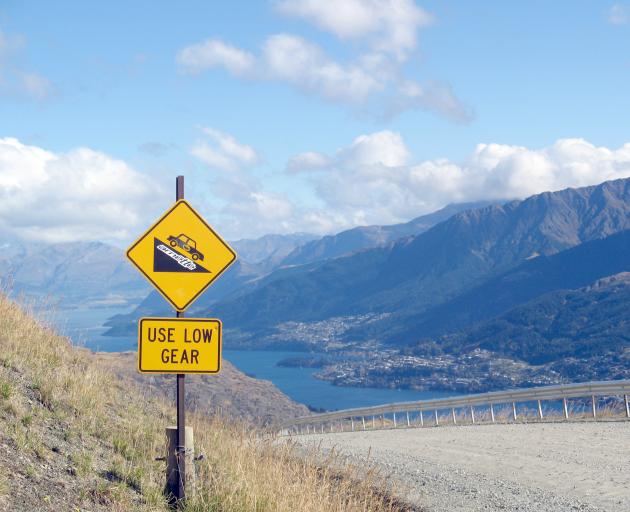 The road to the Remarkables skifield. Photo: ODT files
Depending on whom you talk to, the great outdoors is central to what we think it is to be a New Zealander.

It has been so for time immemorial. Maori have strong spiritual bonds to Papatuanuku, the Earth Mother, who provides unity and identity to her people; over time, generations of New Zealanders have reaffirmed a collective affinity with our shared natural heritage.

Of course we should. We are not so big or overurbanised a country that our natural wonders are too far or too remote. No matter where one is in New Zealand, one is seldom any more than half an hour away from nature.

This image — or, perhaps, myth — of our links to the land has been reinforced by decades of tourism campaigns promoting New Zealand as an accessible paradise. Even now, Tourism New Zealand tells tourists "Kiwis have a passion for the outdoors and delight in activities that make the most of their spectacular landscape".

Indeed we do, and we spend up large when we are doing it. With all the headlines about international tourists flooding our shores, it is often forgotten New Zealand’s biggest single tourism market by visitor spend is little old New Zealand itself.

Domestic tourists — many of whom cram their trips away into short Christmas breaks and long weekends — spent $23.7billion, or $65million a day, in the year to March last year. International visitors spent $17.2billion, or $47million a day, according to the most recently published figures from Statistics New Zealand.

The sizeable domestic spend will surprise those of us whose holidays are notable for routinely making the most of the many free outdoor activities our country offers. We will hike, bike, paddle and sightsee as much as possible, just as we did when we — and our tourism industry — were much younger.

In doing so, we often overlook the uncomfortable fact that our free and unfettered access costs someone, somewhere, a lot of money. Often, that someone is the local council, which spends local ratepayers’ money to maintain the facilities we use free.

We freely use the likes of public toilets, walkways, parks, gardens, museums, galleries, Wi-Fi and roads. And, if asked, many of us would balk at the prospect of paying for something that has always been free, even if it has already been paid for by someone else.

The extent to which others pay for our tourism became clearer as councils sought help from the Government’s tourism infrastructure and responsible camping funds. Over four funding rounds, they have allocated more than $74 million towards all manner of erstwhile freely used infrastructure, such as public toilets, car parks and campsites.

Such facilities remain free, only in so far as we do not immediately understand how our taxes or rates might contribute.

That we struggle with this was reinforced when NZSki announced it would charge a $10 toll for vehicles using the road it owns to its Remarkables Skifield.

The summertime toll would affect motorists using what amounts to a series of easements over private property to visit Department of Conservation land, picnic spots, walks and climbs in the ranges. The New Zealand Alpine Club said recreation clubs were upset and angry, and that the toll would "hinder" families wanting an adventure in the wild.

Local outdoor enthusiasts may access the area multiple times each month, which will soon add up for them, it said.

Indeed it would, just as the cost of maintaining the privately owned, but still publicly accessible, road has mounted up over decades for NZSki. It has spent $20 million on maintenance and it says it is ineligible for help from the tourism fund. As with other aspects of its business, the user will have to pay.

The Federated Mountain Clubs has urged NZSki to consider alternatives — it says introducing a fee "effectively puts public good in private hands" — but alternatives seem thin on the ground. It is unfortunate Doc’s only role is to agree whether the charge is reasonable, rather than to help pay for the road that connects Queenstown with part of its estate.

But it is reasonable to allow the outfit that pays to keep the great outdoors accessible to ask others to help cover what that costs. After all, someone has to pay for it.