Is there a political polling problem? 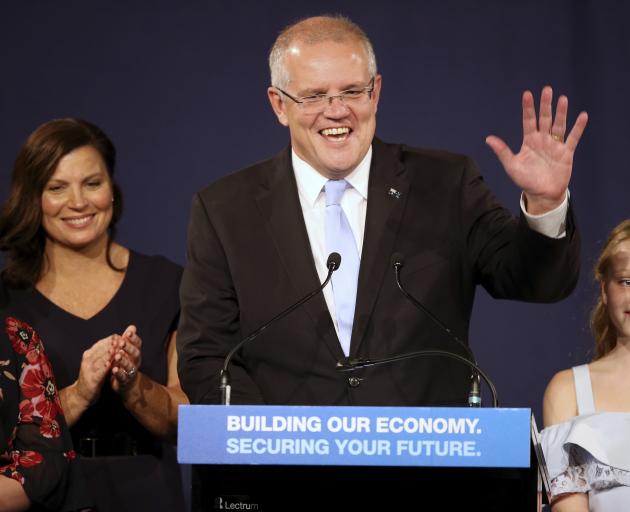 A victorious Scott Morrison thanks party supporters in Sydney. Photo: AP
It has been called a political miracle. While that is hyperbole, there's no denying the Australian election result was surprising.

This, after the country's previous Labor government had committed what most would have thought to be a century's worth of its own cloak-and-dagger self-destruction.

But Mr Morrison has clearly done something right in the time he's been leader as he has been voted back into office.

The surprise was, of course, that polls have not put his government in front for some three years. And as it is in New Zealand, political polling is an important part of the news cycle in Australia. Polling is well funded, well reported and frequent.

The same is true in Britain, where the Brexit vote went against polling predictions. Ironically, those now urging a rethink on Brexit are using a barrage of polls commissioned by themselves to back up their arguments.

The biggest poll shock of all, of course, came on November 6, 2016, when Donald Trump won the United States presidency despite polling data suggesting such an outcome was nigh impossible.

Much water has since flowed under that particular bridge but, it should be remembered, on the eve of the election the campaign had been called the most "presidential" in New Zealand history a straight up drag race between Ms Ardern and Mr English.

In each of these examples, polling has indicated a certain result which has failed to materialise.

In each of these examples, the Left has appeared stronger in polling data than the Right and, more importantly, the Left has polled higher than what the electorate has ultimately delivered.

It is worth noting that, in the above examples, polling data was very close to the final results. A little swing this way or that, added to margins of error, could be all the explanation required.

There is a school of thought, however, suggesting there is a trend at play here. The theory posits much of the major media organisations around the country and the world are staffed - at least on the "shop floor" - by a majority who swing left politically.

Is it possible an element of that presumed political thinking comes through in reporting?

Is it possible consumers of that news then feel it is more acceptable, when asked, to align themselves to the tone of the news stories and causes of the day, rather than more conservative views which may out them as morally outdated?

Is it possible the highly visual social campaigning undertaken by some on the political left - current strikes and marches are a fair example - compel those polled to err towards the left? And that, months later, in a private voting booth with just themselves, their personal views and a list of options in front of them, they opt for their own views - even if those views are more conservative than they're willing to admit out loud?

There could be many reasons why this apparent trend in polling is resulting in a mistaken skew leftwards. It could well be the sample size listed in this piece is far too small to be worth analysing. Perhaps there is no issue at all.

But it is true conflict is something we all tend to avoid when possible.

Political arguments, intellectual disagreements and challenges to our world view are generally tiring and difficult. Is that what's at play here? Is the Left winning the publicity and polling battle, but losing the war?

Chris Trotter penned an excellent article in the Friday print edition about the distinctions between the modern Left and Right. I have noticed that a couple of media organisations push a very strong liberal post modern agenda and hence supportive of the Government, but they turned on the Government strongly this week when it came to shifting the goal posts on debt targets.