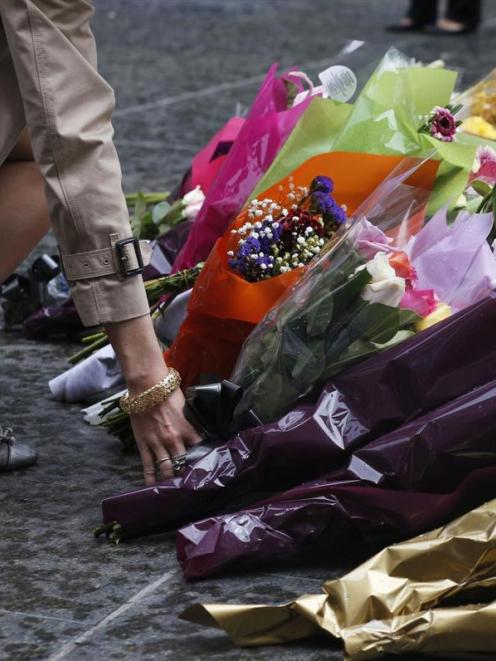 A woman lays a floral tribute to those who died in the Sydney cafe siege, near the site of the inciden,t in Martin Place December 16, 2014. Photo by Reuters.
The hostage tragedy across the Tasman came to what, in hindsight, seems an inevitable end, with the gunman shot by police.

Most terribly, the lives of innocent victims were also lost when the 16-hour siege came to its dramatic conclusion.

The situation began shortly after Man Haron Monis walked into a Sydney CBD cafe on Monday.

Monis was on bail for being an alleged accessory to the murder of his former wife. He also faced more than 40 sexual and indecent assault charges.

He had previously been convicted of sending offensive letters to the families of deceased Australian soldiers.

The self-styled cleric, who described himself on a website as a Shia Muslim who had converted to Sunni Islam, was said by his former lawyer to have been an isolated figure.

One of his demands was to have a flag of Islamic State, the Sunni militant group which recently seized territory in Syria and Iraq, to be delivered to the cafe.

In the aftermath, there was no sign the hostage taker was connected to known terrorist organisations, despite his request for the flag. Instead, the crisis showed the dangers of ''lone wolf'' terrorism.

The two main dangers to Australia, and New Zealand if the Government provides support in any way to the United States in fighting the IS, are widely seen to be fighters with foreign passports returning to their home countries to commit acts of terrorism; and radicalised IS sympathisers taking it upon themselves to commit terrorist attacks to fulfil their radical ideology.

Society is entering a new phase of terrorism far more dangerous, and more difficult to defeat, than al Qaeda.

The legislation, however, seems to ignore the possibility of a one-person terror operation, rather than incidents planned by a group of dissidents.

Rushing to justify greater surveillance powers is the wrong action to take.

Instead, New Zealanders and Australians must stand together to strengthen their communities, embrace change and welcome new opportunities.

Xenophobic politicians and their supporters have no place in this debate.

Inciting hatred will go nowhere in solving a problem of this magnitude.

Too quickly in Australia on Monday, some people rushed to condemn all Muslims for the actions of a deranged man.

Reports of Muslim women being spat on in Sydney and Adelaide were posted on social media, itself criticised for the amount of information being shared online.

But in a ray of hope, a woman on a train was seen removing her hijab, fearing a backlash of venom from fellow travellers.

A white Australian offered to travel with her - sparking hundreds of thousands of messages of support.

The Twitter hashtag #illridewithyou quickly went viral as Australians fearing a backlash against Muslims offered to escort them on public transport.

Now is the time for coming together, he says.

Australians must close ranks in their resolve to protect what they value most - their way of life, their care and respect for each other.

Australian Prime Minister Tony Abbott is obviously shaken by the events and says it will take time to clarify exactly what happened in Martin Pl - and why.

Understandably, there will be a lot of speculation about what has occurred, but Mr Abbott says what is known is the perpetrator was well known to State and Commonwealth authorities. He had a long history of violent crime, infatuation with extremism and mental instability.

Attacking a section of society because of the actions of one person is wrong.

To do so threatens the very fabric of the values New Zealanders hold dear, too.

Their families, friends, workmates - and many others, too - will be left grieving for months and years to come.

This event saw tragically lives cut short by the actions of one person. Generating hate is not a fitting memorial to their deaths.

Providing support and compassion in times of need would, however, give their shortened lives meaning.