Good things come in small packages, so the old saying goes. "Small is beautiful" is another, and became the title of a best-selling book on economics written by E. F. Schumacher in the early 1970s. 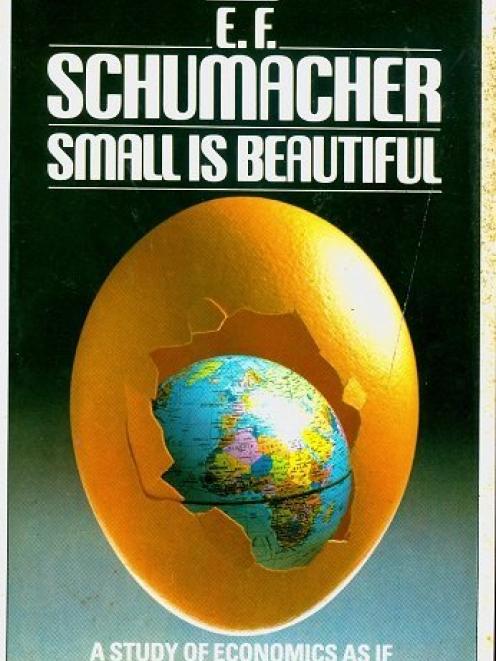 Small Is Beautiful by E.F. Schumacher
What these two maxims are telling us is that bigger is not always better. When it comes to organisations especially, bigger often means unwieldy, bloated, slow to act and low-achieving.

Enter the United Nations, that vast body of countries which represents a staggering 99.44% of the world’s population.

As Russian President, accused war criminal and butcher Vladimir Putin continues his bloody war against neighbouring Ukraine, the question has to be asked: What has the United Nations done to stop him?

If you are also scratching your head to think of something, you are not alone. It is during just this kind of brutal conflict, with the killing of several thousands of innocent people and the destruction of their homes, when the United Nations should shine.

Interestingly, former New Zealand defence minister and NZ First MP Ron Mark pulled no punches on Q+A when asked about the Russian aggression. He called the UN "toothless", and he is largely right.

So what has the UN done? Well, at the start of March the General Assembly of 193 member nations passed a resolution 141 votes to five (with 35 absentions) condemning Russia for the invasion of Ukraine and demanding it withdraw its military. "Big deal", you might say.

Then last month, it actually did something a little more solid, voting to expel, by 93 votes to 24 (58 absentions), the Russian Federation from the UN’s Human Rights Council. That made Russia the first permanent member of the UN Security Council to have its membership revoked from any UN body.

Just last week, UN Secretary-general Antonio Guterres met Mr Putin in Moscow. In a scene that could have come straight from Monty Python’s Flying Circus, the two stared at each other down a table that looked at least seven metres long. "Pass the salt" or "my serve", you wanted one of them to shout.

The outcome this week of that bizarre encounter has at least been positive, with the UN and Red Cross evacuation of civilians from a steelworks in the besieged city of Mariupol, which has been blasted to bits by Russian artillery in recent weeks.

It is good to see the UN is now working to make a difference in Ukraine. But it has taken too long. Many will be calling for radical changes to this cumbersome organisation.

The BBC reported that when Ukrainian President Volodymyr Zelenskiy addressed the Security Council, he probably made some feel uncomfortable by reminding them the UN had been set up after World War 2 to guarantee peace.

Listing alleged war crimes, he asked for an investigation. ‘‘Are you ready to close the UN? Do you think that the time of international law is gone? If your answer is no, then you need to act immediately,’’ the BBC reported.

Russia has shown no regard for human rights and due UN process, yet is still allowed to have a right to veto in the Security Council.

That is a joke and has to change. There might be a lot of bluster and resistance, but if the collective intellect, goodness and might of the UN cannot change that, then really what is the point?

The PC-brigade has struck again, this time in the country that admittedly is probably more in need of political correctness than most – Australia.

In a training session by a "diversity and inclusion" consultant, New South Wales government ministers were advised not to use the quintessentially Aussie (and Kiwi) word, "mate".

Unsurprisingly, the advice has caused an uproar.

What happens to words like "checkmate" and "Mealmate". Or even "climate", "legitimate" or "underestimate"?

There must be more important matters to put right in Australian politics, surely?

Overfamiliarity.
"Don't call me 'mate'. You know what mates do" was said by old time, non PC journos.