When we were children, finding lost or buried "treasure" was one of those great games which kept us occupied for hours and out of our parents’ hair. The quest to find treasure could be made more real by producing a roughly drawn map, torn at the corners, of an island, with an X marking the spot.

Treasures are in the seas all around us, but these taonga are not rubies, pearls or barrels of rum. These treasures include more varieties of fish and sea mammals than you could imagine, shellfish and crustaceans of different shapes and sizes, hard and soft corals, sea sponges, starfish and jellyfish, and a wide range of seaweeds and other aquatic plants.

We still have an enormous amount to learn about the planet’s marine life. Much of it remains undiscovered and, at the same time, species we have known about for years are becoming endangered or even extinct as their habitats change.

What is becoming clear is that the effects on our climate and ecosystems of humanity’s behaviour in burning fossil fuels and emitting large quantities of greenhouse gases are not just making their presence felt on land. Rising sea temperatures and increasingly acidic oceans are affecting the distribution of species there and their ability to survive.

Marine creatures and plant life also have to cope with the gargantuan amounts of rubbish we dump into the oceans every year, particularly plastic waste. Microplastics are a particularly invidious invader, and can do immeasurable damage to fish and other sea life when they swallow it.

News last week that thousands of paua, one of New Zealand’s real treasures, had washed up on a South Otago beach dead or dying is highly concerning. Paua are arguably our most recognisable and unique shellfish, a sought-after delicacy not just for their flavour which some enjoy but also their beautiful appearance, with that shimmering iridescent shell.

According to alarmed Kaka Point residents, the marine gastropods and other marine life were piled up on the beach after a heavy tide. The stranding was on a much larger scale than similar occurrences in 2013 and 2016.

The Ministry for Primary Industries says the exact cause of the beaching is not yet known but is likely due to recent severe weather, with heavy rainfall causing large discharges of freshwater and sediment to the sea from the Clutha River, combined with big easterly swells then washing freshwater-averse paua onshore.

Of course not all bad weather can be sheeted home to climate change. But the very wet and stormy July, which set all kinds of records, was definitely exacerbated by global warming.

They found that millions, possibly tens of millions, of usually velvety-brown sponges had turned white at six sites, in what leader Prof James Bell believed was the largest temperate bleaching event yet observed.

It’s another nail in the coffin for our environment and the world we know, or think we know. And another reason to say change has to happen, now.

We have to say it’s not really even somewhat sad that Dunedin Mayor Aaron Hawkins is among a group of New Zealanders who have been banned from visiting Russia by the murderous narcissist Vladimir Putin and his sycophantic ilk.

Mr Hawkins discovered at the weekend he had joined the elite team of 32 — including comrade mayors in Christchurch, Wellington and Auckland, and journalists — no longer able to travel there for an indefinite period.

The details of the blacklist remain vague, other than it is the Russian Foreign Ministry’s will in response to New Zealand government sanctions.

Mr Hawkins speaks for most of us on this issue at least. His problem is with the Putin regime and what it is doing in Ukraine, not with the Russian people. 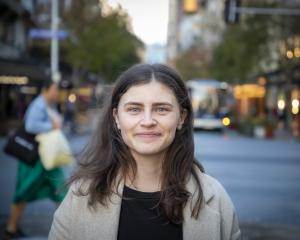