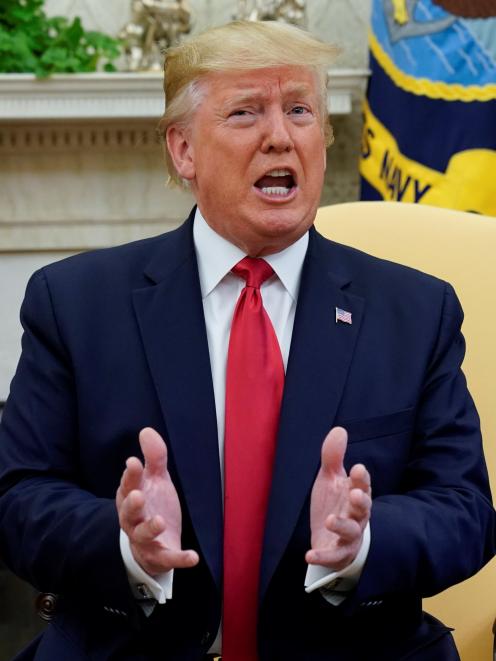 Donald Trump. Photo: Reuters
For anyone who hoped former US president Donald Trump was doing little more than bore with boasting from the golf course, the first anniversary of the storming of the Capitol Building may have been a rude awakening.

The anniversary, and a hard-hitting speech from President Joe Biden calling out Mr Trump’s behaviour on January 6 last year and his ongoing promotion of ‘‘The Big Lie’’ that the 2020 election was fraudulent, prompted a war of words between the two presidents.

Seeing more shocking television coverage of the events of January 6, when Mr Trump’s supporters stormed the Capitol Building in Washington DC to try to stop Congress confirming Mr Biden as president, it seems laughable that some Republicans have attempted to convey the scenario that day was something akin to a Sunday school picnic.

While it may be true that some of those present were there for a peaceful protest, there were plenty that were not, egged on by the deluded former president.

President Biden said one police officer had called it a ‘‘medieval’’ battle and the police had repeatedly asked since that day: ‘‘How dare anyone — anyone — diminish, belittle, or deny the hell they were put through?’’

But of course that is not in the interest of Mr Trump, who is continuing, against all the evidence to the contrary, to say that he won the election, conveniently overlooking that it was not even a close contest.

What President Biden also pointed out was that the ‘‘lies that drove the anger and madness we saw in this place’’ have not abated.

What is unfortunate is that, in the main, Republican leaders did not make the most of the opportunity they were given a year ago to distance themselves from the former president and his lies.

How some of them, including House Republican leader Kevin McCarthy, who said shortly after the storming of the Capitol that Mr Trump bore responsibility for the riot, can now blithely get away with sucking up to the former president seems bizarre at this distance.

It may have been easy to fall into the trap of believing Mr Trump was no longer a force simply because we have been spared from his outbursts after his suspension from Twitter and Facebook. However, he has been busy endorsing candidates who share his warped view of reality for the November mid-term elections, although this may backfire in swing districts.

Apart from the unbridled pursuit of power of some Republican politicians, another reason for the party’s inability to break free of the former president is that he continues to be a strong party fundraiser.

One Republican who has stood her ground against Mr Trump is the former third highest ranked Republican in the congress, Liz Cheney.

After she initially survived a vote on her leadership last February, a second vote in May saw her demoted. By then, as she told the New York Times podcast The Daily, ‘‘it was clear that to stay in leadership, I would have to be willing to perpetuate the lie’’.

Plenty of her colleagues had swallowed some rather large dead rats by then.

But Ms Cheney is adamant that she has made the right decision, saying if elected officials are not going to take seriously what it ‘‘really means to be in these offices, then we are in a bad place’’.

She does not minimise the impact of speaking out against the lies, but ‘‘if you’re just going to get elected to office to say you’re in the office, but when the chips are down and when the test comes and you’re unwilling to do what is right, that really does then create the potential that the system can unravel. And I think everybody’s got to come to grips with the role that they play in preventing that from happening.’’