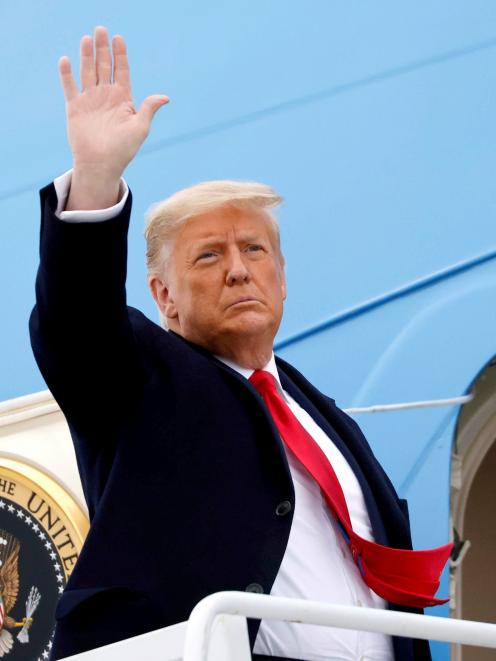 Donald J. Trump: The 45th President of the United States, and the first to be impeached twice. His presidency ends on Thursday. PHOTO: REUTERS
The second impeachment of United States President Donald Trump this week will do little to ease the tension in the countdown to the inauguration of the next president on Thursday.

Mr Trump was impeached on a charge of incitement of insurrection for the part he played in the lead-up to the storming of the Capitol by pro-Trump activists earlier in the month. The move has put him in the unenviable position of being the only president to have been impeached twice.

Ten Republicans joined their Democrat counterparts in the House of Representatives to vote for the impeachment, making the final vote 232 to 197.

Quite what will happen next regarding the impeachment is unclear. The next step in the process would involve the Senate and a trial in which senators are the jury. To remove Mr Trump would require a two-thirds majority, something not achieved following his first impeachment.

If he were to be found guilty, separate votes would be required to bar him from future office and stop him from receiving ex-presidential benefits.

There is no time to hold a trial before Joe Biden takes office, but the timing of any trial will be a conundrum. Democrats will be wanting to get on with implementing their policies, but they will also want to draw a line under the Trump presidency. If the issue lingers on and on will it ramp up the pro-Trump supporters who will want to believe Mr Trump is a martyr?

Following the impeachment, Mr Trump released a video statement calling for calm and a united country.

He told viewers there was "never a justification for violence, no excuses, no exceptions".

"Mob violence goes against everything I believe in and everything our movement stands for. No true supporter of mine could ever endorse political violence."

His expression of such sentiments now must be baffling to his ardent followers who have been egged on by his inflammatory rhetoric throughout his term of office, particularly his refusal to accept the outcome of the November election and his continued baseless assertions the vote was rigged.

With mainstream social media sites moving to shut down accounts, including those of President Trump, which are peddling misinformation or seen as inciting violence, there is now concern would-be rioters are using encrypted sites which are harder for authorities to monitor.

The Federal Bureau of Intelligence (FBI) has warned of plans for armed protests for Washington and 50 state capitals in the days before the inauguration. Even if these do not eventuate, nobody will be expecting the alt right activists will miraculously disappear, but will regroup and recruit using sites where their discussions can be no holds barred.

All this uncertainty and unease is swirling around the inauguration plans. Washington, with its boarded-up buildings and 20,000 National Guard troops deployed there, looks more like a war zone than a preparation for an occasion usually known for its pomp and ceremony and razzamatazz.

In these circumstances, the biggest celebration for many might be if the day proceeds without violent incidents.

I guess the ministry of propaganda doesn't research anything. Trump has already left the Whitehouse and is in his home in Florida. There won't be any of the nonsense of "lock him up" as he leaves. His approval rating is 48% which is higher than sleepy Joe.

I'd like to know where you get your information? Everything I've read says twice impeached ex president trump is staying in the Whitehouse until the morning of the inauguration day.

I just checked the Whitehouse email distribution list, your names is on the list for presidential itineraries. You mean you didn't get it? That's a real shocker!

Interesting; Ohio Focus Group, 77 Percent Like Trump More, 23 Percent Same Opinion, Zero Percent Like Less (https://www.cincinnati.com/story/news/politics/2021/01/13/capitol-riot-c...). This despite all the Kiwis who have Trump derangement syndrome. Makes you wonder doesnt it?

No. It's not in the least bit interesting and certainly doesn't make me wonder, not one little bit. Twice impeached ex president Trump lost the election. He lost to one of the weakest democratic candidates there has ever been. As he said himself , "Losing to sleepy Joe would make me the biggest loser ever.*

The use of the feaux expression, "Trump derangement syndrome* tondescribe his opponents is farcical.. the truly deranged are his supporters.

Im in ping pong pizza getting my Intel from the Russians. I found Hillary's email right next to the democrats plan for stealing the election. That said, I find the liberal perspective of kiwis like yourself to be a serious waste of time. Ooops, got to get my tin foil hat and get back to my parents basement befores they get home.

The liberals like to point out the words "Impeached" with regards to Trump. Doesn't mean anything unless there is a conviction. How about the 50% approval rating? What does that say about twice-convicted president?

Red Pill.
Buck up. You're getting petulant. 'Liberal', 'conservative' are irrelevancies. Accuracy is important. What is this 'Ministry of Propaganda' you write of?

Rep. Marjorie Taylor Greene, a Republican from Georgia, said in a tweet she would file Articles of Impeachment against Biden on Jan. 21. That’s one day after the inauguration of Biden and Vice President-elect Kamala Harris. The Republicans might have enough to impeach but it won't make it through the senate.