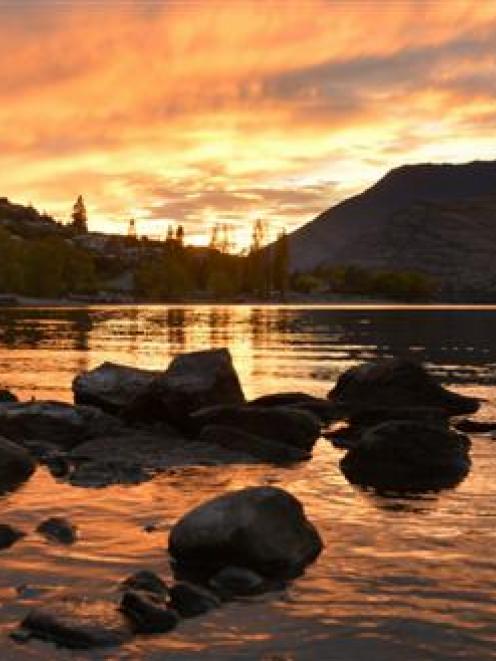 Sunrise on Lake Wakatipu. Photo by ODT.
Rapid growth brings with it all sorts of problems, not the least of which are planning issues. Thus it is with Queenstown and the Wakatipu.

There are almost always disagreements about what should be built and where.

Inevitably, more rural land is gobbled up because housing and commercial, retail and industrial businesses have to go somewhere.

After an especially divisive period in the late 1990s and early 2000s, the district generally has muddled along with these complex matters and the unavoidable differences and disagreements in a reasonable fashion.

Most outstanding landscapes and vistas have been protected, and sprawl limited in the most sensitive areas.

In that context, the Frankton Flats saga, including plans for a $50 million Pak'n Save and Mitre 10 Mega, is somewhat bewildering.

The fact is, planning matters around Frankton and the airport have been an ongoing and litigious mess.

The flats themselves are one of those former rural areas that was - given its strategic position - always going to be rezoned.

The Queenstown Lakes District Council began the process in 2007, with the proposal being primarily for industrial land.

Since then, Remarkables Park developer Alastair Porter has put forward his own change.

The council, arguing the need to control development and believing other sites would be better for the stores, challenged Mr Porter's plans, and has been involved in zoning and consent hearings and appeals over the last few years.

Matters have been heard by the Environment Court and the High Court and gone to the Appeal Court.

Accusations have been made that some of the appeals and opposition is based on trade competition rather than genuine planning issues.

Then, recently, a hearing took place before two independent commissioners - a wise move given the council's long and close involvement - for resource consent to build the two stores in the proposed Frankton Flats Shotover Park development, which Mr Porter is behind.

The commissioners said the stores can go ahead subject to road changes and other conditions.

This remains subject to possible appeal to about the end of the month.

Many in the Wakatipu must wonder when this is all going to end.

There is a strong desire for more competition in the supermarket business and a Pak'n Save will be widely welcome. And the Mitre 10 in nearby Remarkables Parks - like so much in Queenstown - needed to be bigger from the day it opened.

There is a wish the big boys, big interests, including other developers from outside the district pursuing their commercial agendas, and the council in Queenstown could stop scrapping and get on with it.

A plague on all their houses is not an uncommon attitude. Many millions are spent in the battles, with long-suffering ratepayers among those having to pay out large amounts.

Sensibly, the commissioners have stipulated the respective yellow and orange branding of the stores be toned down, just as The Warehouse had to soften its red at the request of Remarkables Park Ltd.

Perhaps the stores could have been sited somewhere else in the general vicinity.

At the very least, it will be prudent to have them away from central Queenstown.

It and the road along the lake are already crammed.

Just as in Wanaka, much of the big box retailing serving the wider region is best away from the tourist, small shop and hospitality hub.

Meanwhile, while the Frankton Flats business continues, concerns about the spread of Arrowtown are being aired at the Environment Court as a private plan change proposed for the outskirts of the town is considered.

It is little wonder some question the mantra of growth and the benefits of rapid development.

But while it must be acknowledged these issues are not easy to resolve, the problems caused by expansion are far preferable to difficulties brought about by decline.