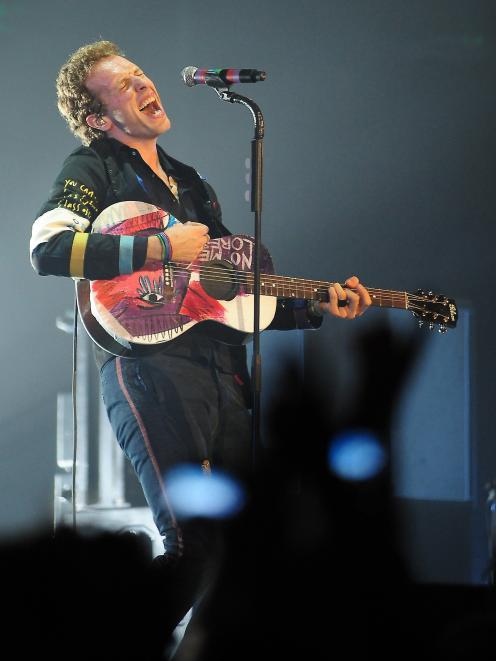 Thus reported Italian magazine GoGo following the most seismic event on the New Zealand music scene since the Dance Exponents dropped the "Dance". Translated, it means ‘‘Coldplay loves the Otago Daily Times and reading it will fix you". Or something like that.

It is just one example that illustrates how far the story of British band Coldplay choosing to unveil lyrics to 15 new songs from their upcoming album, Everyday Life, through the pages of the ODT travelled around the globe.

That one of the world’s few remaining musical supergroups would choose traditional media — a newspaper that, while of the highest quality, is tucked away at the bottom of the world — in the age of the tweet and the post and the viral video says ... well, what exactly does it say?

It could mean that Chris Martin and company just really love the focus on quality local journalism and fierce independence that has been this newspaper’s stock in trade for nearly 160 years.

Or that Martin feels he owes the city for its hospitable treatment he received while he and then-partner Gwyneth Paltrow stayed here some years ago when Paltrow was filming a movie.

Did they pull a name out of a hat?

Spin a globe and bring it to a stop with the tap of a drumstick?

Perhaps it matters not. Perhaps Coldplay, 23 years and 100million records after being formed, just like doing things a little differently.

Whatever the case, it was a smart piece of marketing. In an age of short attention spans and mass media, there is much to be said for doing things the traditional way to get some attention.

It certainly worked. News coverage of the album release spiked as traditional and social media raced to make sense of it all — not only the cryptic lyrics but their placement in this newspaper.

Coldplay did their bit to promote both the album and the ODT, revealing screenshots to their 23.7million fans on Twitter and referring to the "Dunedin area of New Zealand". That’s the sort of marketing money can’t buy.

Interestingly, Martin has now revealed the band is reluctant to commit to a tour schedule until it can determine how to do so in an environmentally friendly manner.

"We've done a lot of big tours at this point," Martin told the BBC. "How do we turn it around so it's not so much taking as giving?"

We can only hope Coldplay chooses the best of mainstream media to announce any such tour. Hint, hint.