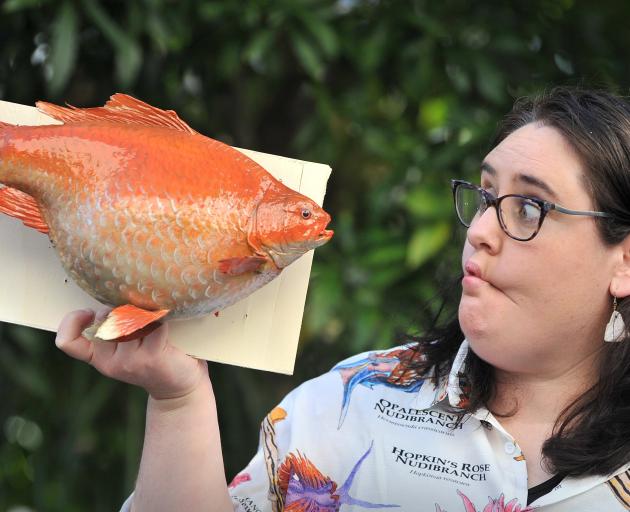 Otago Museum natural science curator Emma Burns with Wanda, the goldfish which went wild and grew to 2.4kg. PHOTO: CHRISTINE O’CONNOR
The story of the fish called Wanda we featured this week is a timely reminder of the risk seemingly innocent animals can pose to our ecosystems.

Wanda, believed to be once a pineapple-lump sized goldfish entertaining her owners in a fishbowl, was dumped in a creek near Wanaka which allowed her to grow into a 2.4kg whopper.

Her death set a New Zealand spearfishing record for goldfish.

So far, so amusing. But Wanda has been preserved for display at Otago Museum to draw attention to the damage such fish can cause in our waters when they go rogue.

There are 23 species of introduced fish in New Zealand. As the Department of Conservation says, all make an impact, but some cause more problems than others including catfish, gambusia, koi carp, and rudd.

They are damaging because they may stir up sediment making the water murky, eat native plants, increase nutrient levels and algal concentrations, contribute to erosion, and compete with or prey on native species.

Those who illegally dump pet fish rather than rehome them may also cast damaging exotic aquatic pest plants into the water.

According to the National Institute of Water and Atmospheric Research (Niwa), more than 70 invasive freshwater aquatic plants have been introduced into New Zealand, mostly through the aquarium and ornamental pond trade, with devastating effects.

Most lakes, rivers, streams, and wetlands are affected by at least one species of such weeds, Niwa says.

To help combat this, some native aquatic plants have been cultivated as alternatives to the pest plants.

Perhaps Wanda’s owners felt sorry for her swimming around a boring fish tank and thought she would be much happier floating free in the big wide world. Maybe they had grown tired of watching her limited fishy expressions.

Whatever the reason for her ejection from the family home, it highlights the difficulty some people have in seeing the wider ecological picture.

Our blind spots are not limited to goldfish or aquatic weeds, of course. How many people have encouraged hedgehogs, not realising that dear little Mrs Tiggy-Winkle, far from being a benign washerwoman as in the Beatrix Potter tale, has a voracious appetite and will eat native weta and other rare insects, native snails, skinks, frogs, and the eggs and chicks of ground-nesting birds?

The recent discovery of a pile of 28 dead native lizards found to have been regurgitated by a cat on the outskirts of Alexandra may reignite the debate, famous for its association with Gareth Morgan, about whether we need controls on domestic cats.

In the Alexandra instance it is not known whether the culprit was a domestic or feral animal, but cat owners who believe their overfed darlings would never kill anything when they are roaming, who knows where, are probably kidding themselves.

And, as University of Otago urban ecologist Prof Yolanda van Heezik points out, owners do not necessarily have accurate knowledge about what their cats are catching. Recent studies show that what cats bring back is ‘‘on average only a quarter or a third of what they actually catch and kill’’ she told The Spinoff.

The Society for the Prevention of Cruelty to Animals encourages those who adopt their cats to make them at- home cats because it says cats enjoy longer healthier lives, avoiding car accidents or other outdoor injuries, getting lost, or stuck, parasites, disease and other animals who might fight with them. The other reason for choosing to keep cats at home is to prevent them from causing harm to native wildlife, it says.

At this point, it is unlikely all cat owners would be willing to make this change but pressure for some sort of control on domestic moggies may be gathering steam.

It's the owners who are bad, not the pets - they and the wildlife that are impacted by their release are the victims of wishy washy people abandoning them because they are "kind" enough to make their problems ours and the environment's. Pet shops should be linked to rescue centres for owners who can't cope.