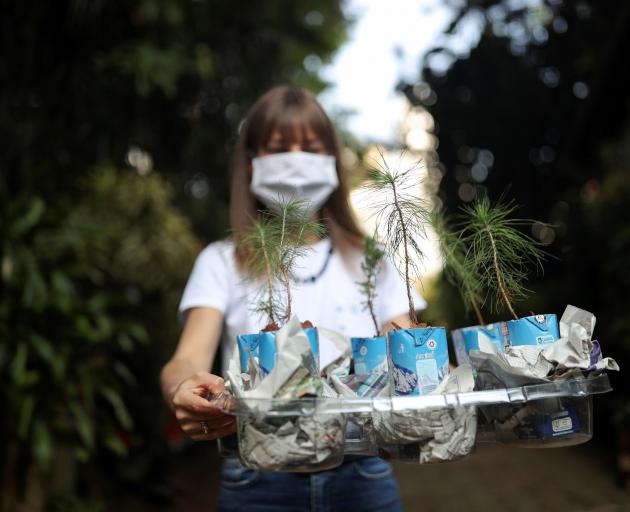 Fabiana Tchalian, co-founder of Agua na Caixa (Water on the Box), carries seedlings for planting on Earth Day in Sao Paulo, Brazil, last week. PHOTO: REUTERS
The natural side effects of the coronavirus — clear skies and apparently thriving wildlife — offer a glimpse of a green future, writes Oliver Milman in The Guardian.

The skies are clearing of pollution, wildlife is returning to newly clear waters, a host of flights have been scrapped and crude oil is so worthless the industry would have to pay you to take it off their hands — a few months ago, environmentalists could only dream of such a scenario as the 50th anniversary of Earth Day hove into view.

But this disorientingly green new reality is causing little cheer given the cause is the coronavirus pandemic that has ravaged much of the world.

"This isn’t the way we would’ve wanted things to happen, God no," Gina McCarthy, former head of the US Environmental Protection Agency in the Obama Administration, said.

"This is just a disaster that pointed out the underlying challenges we face. It’s not something to celebrate."

Last Wednesday’s annual Earth Day event came as public health restrictions to prevent the spread of Covid-19 have resulted in a sharp dip in air pollution across China, Europe and the US, and carbon emissions from the burning of fossil fuels heading for a record 5% annual drop.

The waters of Venice are now clear, lions lounge on roads normally frequented by safari-goers in South Africa and bears and coyotes wander around empty accommodation in Yosemite National Park in California.

Meanwhile, nearly eight in 10 flights globally have been cancelled, with many planes in the US carrying just a handful of people. The oil industry, a key driver of the climate crisis and direct environmental disaster, is in turmoil, as a barrel of crude hit an unprecedented -$US40 ( -$NZ66.75) last Tuesday.

These would perhaps be the sort of outcomes seen had stringent environmental policies been put in place in the wake of the first Earth Day in 1970, when 20million Americans rallied in support of anti-pollution measures.

Instead, the pain of the Covid-19 shutdown has highlighted how ponderous the world’s response has been — the expected cut in emissions, for example, is still less than what scientists say is needed every year this decade to avoid disastrous climate effects for much of the world.

"It’s the worst possible way to experience environment improvement and it has also shown us the size of the task," Michael Gerrard, an environmental law expert at Columbia University, said.

How people react to the return of normalcy after the pandemic will help define the crises racking the environment, according to Gerrard.

"A key question will be do we have a green recovery, do we seize the opportunity to create jobs in renewable energy and in making coastlines more resilient to climate change?" he said.

"The current US president clearly has no inclination to do this."

McCarthy, now head of the Natural Resources Defence Council, noted some Indian people were seeing the Himalayas for the first time due to the veil of air pollution lifting.

"You wonder if people will want to go back to what it was like before," she said.

"The pandemic has shown people will change their behaviour if it’s for the health of their families. This has been the lost message on climate, that it’s a human problem, not a planetary problem. We have to show you can have a stable environment and your job, too."

The problems in the natural world have not suddenly vanished — last week various researchers found that the Arctic was very likely to be free of sea ice in summers before 2050, that the bushfires that torched Australia earlier this year released more carbon than the country’s annual CO2 output and that the first quarter of this year was the second warmest on record.

Donald Trump has signalled he will try to provide a bail-out to the US oil and gas industry, with $US25billion already handed out by the US Government to prop up airlines. In China, it is not certain that the wildlife-packed "wet markets" where Covid-19 is believed to have originated will be shut down.

Conservationists warn that returning the world to its pre-pandemic settings will quickly wipe out any environmental benefits of the shutdown.

"We bulldoze into the last remaining places in nature and then are surprised when something like this happens. We have done this to ourselves by our continual intrusion into nature. We have to rechart our course."

- This story was originally published by The Guardian as part of Covering Climate Now, a global journalistic collaboration to strengthen coverage of the climate story.