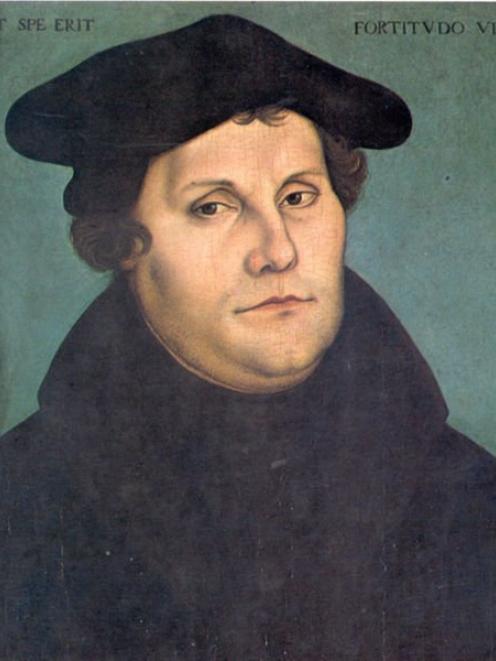 Martin Luther (1529), by Lucas Cranach the Elder.
This year marks the 500th anniversary of a convulsion that split Europe — yet all the monk who triggered it wanted was a theological debate, writes Ian Harris.

Secular moderns don’t find it easy to get a handle on the remote theological squabble that exploded in Europe 500 years ago this year, even though its effects are with us still. That’s because the life-and-death concepts so vital to everyone at the time — God, faith, sin, forgiveness, heaven, hell, eternal life, the nature and authority of the church, the Bible — mean little to growing numbers of Westerners today.

The explosion was the great Reformation of church life in Europe. Yet, strikingly, the man who triggered it had not the slightest intention of splitting the Catholic Church asunder: Martin Luther was a model monk and parish priest, diligent in his studies, faithful in his religious observances, concerned for his parishioners in the small east German town of Wittenberg.

Like many loyal churchmen of his day, however, he shared a visceral disgust at the corruption of the late medieval church, uber-rich, uber-powerful, uber-political.

For example, Pope Leo X, a cardinal since the age of 13, needed big money to complete the building of St Peter’s Basilica in Rome. To raise funds, he authorised the sale of get-out-of-purgatory guarantees. The money rolled in.

The German franchisee was a prelate who, for a handsome donation to St Peter’s, had at 24 become archbishop of two wealthy dioceses and bishop of a third. For this he had to borrow heavily, and Leo helped him to pay off the loan by selling the guarantees, or "indulgences", in German territory. Half the proceeds would offset the multi-bishop’s loan, the rest would flow to St Peter’s.

The church had long seen to it that sin loomed large in everyone’s consciousness and fears of hell were graphic and real. People might repent of their sins but must still be punished, whether in this life or the next — for which the church invented purgatory.

Earlier popes had moved to ease their plight by assuming the power to shorten or even cancel their punishment. After all, hadn’t Jesus and the saints amassed a huge credit balance of good works, a "treasury of merits" they could draw on? It was available to anyone who bought an indulgenceLuther’s prince forbade these transactions in his domain. But Luther heard that some of his parishioners were travelling to a town across the border to buy an indulgence from a travelling monk who, to boost sales, broadened the papal guarantee to include dead relatives.

The monk pleaded: "Don’t you hear the voice of your dead parents crying out, ‘Have you no mercy on us, for we suffer great punishment and pain? From this you could release us with a few alms.’ As soon as the coin in the coffer rings, the soul from purgatory springs."

The question "How can I be saved?" caused Luther great anguish, and he was appalled. So on October 31, 1517, he posted on the local church door, which doubled as a bulletin board for Wittenberg’s university, 95 propositions to be tested in debate. In the previous two years he had come to believe with St Paul that putting one’s whole-hearted trust in Christ was sufficient to bring sinners eternal life — and it came from grace freely given, not by punishment beyond death, and especially not by buying it for cash.

Indulgences were a delusion, he declared, and "those who believe they can be certain of their salvation because they have indulgence letters will be eternally damned, together with their teachers." Ouch!

Another thesis questioned why Leo did not use his own fabulous wealth to build St Peter’s, "rather than the money of poor believers".

Apart from the denunciation of indulgences, though, Luther showed due deference to the pope.

Then they were translated from Latin into German. The new printing presses worked overtime to spread them around. Swirling social, economic and political currents magnified their impact. The theses tapped into wider resentments — church corruption, the torrent of German money flowing to Rome, papal restraints on the German princes’ autonomy. Luther found himself a hero for saying openly what so many were thinking.

The revenue stream from indulgences dwindled, and the church’s focus switched to papal authority. It ordered Luther to bow to authority and recant. Yet, initially, all he had sought was to debate the question: Can the church justify indulgences on the basis of scripture and reason?

The cleft widened. Leo branded Luther "a son of perdition" and excommunicated him. Luther publicly burnt the document. A number of German rulers gave him their blessing. Mutual abuse flew and grew. The church in Europe was irrevocably sundered.

A new Europe was being born.

The alms, then, were not for the poor, but very good of them to bless 'the stiffs' (dead), retrospectively. The Reformation was as much political as religious. Luther burnt a couple of dissenters, and the Church was State. 30 years was a long war, and 500 years is a long time to be tarred with the epithet 'protestor' (Protestant).

The Protestant church is alive and well. Still.