Faith and reason: Understanding of Bible central to same-sex attitudes 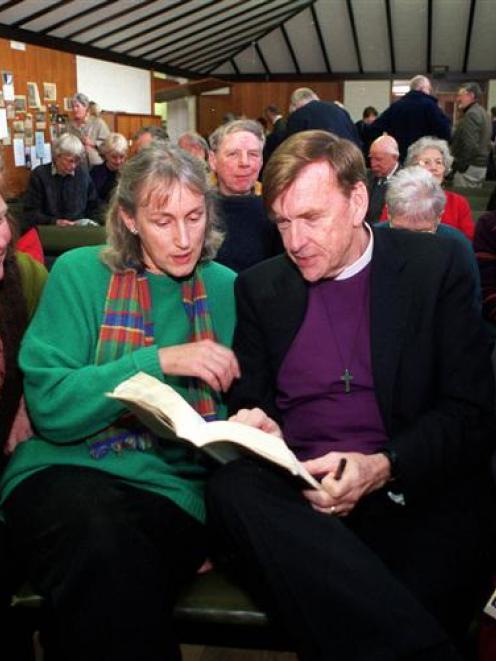 Controversial United States cleric Bishop John Spong chats with Dunedin women (from left) Ann Broadfoot, Jenny Madill and Cynthia Greensill, at a seminar in Dunedin in 2001.
At the very least, churches must relate to the world as it is, not was, writes Ian Harris.

Hear what the Spirit is saying to the church, intones whoever has just read the day's scripture passages in Anglican worship.

Last month, the church's General Synod took up the cry in relation to same-sex partnerships: ''At this time it is the will of the General Synod/Te Hinota Whanui to respond to what the Spirit is saying to the church.''

Now comes the hard bit: What exactly is the Spirit saying to the church? What each person hears will depend largely on how they understand the Bible in all its depth and variety.

On homosexuality, is the Spirit calling for a strict literalism bound by the knowledge and attitudes of the many men (unrelievedly men) who had a hand in writing the Bible 2000 and more years ago? Or an understanding based on what science is adding to our knowledge of human sexuality, and what the scriptures can inspire in living fully and loving responsibly?

One who made the journey from condemnatory prejudice to championing the place of homosexuals in the human continuum is John Spong, a retired bishop of the US Episcopalian (Anglican) Church.

Brought up in America's segregated South, Bishop Spong initially shared the traditional male stereotypes about homosexuals. His autobiography tells how he took into the priesthood his view of homosexuality as ''an aberration, a distortion of normal behaviour, perhaps even a mental illness''.

In 1985, however, he initiated a study within his Newark diocese on changing patterns in sexuality and family life. A revolution in sexual attitudes and behaviour was occurring, and he believed the new times demanded a thoughtful response from the church.

The study broke new ground. It proposed that assessment of all relationships, including premarital and post-married, should be ''in terms of their capacity to manifest marks of the realm of God: healing, reconciliation, compassion, mutuality and concern for others''. It even contemplated new liturgies to recognise and bless committed homosexual relationships.

That hit the headlines. Controversy raged. The United Methodist publishing house commissioned Bishop Spong to write a book on the issues. He did - but on the eve of publication certain Methodist leaders demanded it be abandoned. Nine other publishers promptly queued to take it up, and it appeared under the title Living in Sin? A Bishop Rethinks Human Sexuality.

The book explores the issues clearly, especially for the churches, canvassing sexuality in relation to betrothal, marriage, divorce, homosexual commitments, post-married singles, the use and misuse of the Bible in coming to conclusions about all of these, and the role of the church.

In preaching, the biblical book of Jonah proved invaluable. This gem of a parable is a classic expose of prejudice, set against the limitless and life-affirming power of God's love. Bishop Spong used it to challenge prejudice against homosexuals and invite congregations to welcome them into their midst.

Present at one such service was a doctor specialising in microbiology and sex-related brain research, Robert Lahita. A former Catholic, he had become disheartened by his own church's refusal to take account of modern science in its ethical pronouncements.

The brain, Dr Lahita told Bishop Spong, is the primary sex organ - ''all else is equipment''. The sexing of the brain occurred through a biochemical process in the womb. It determined a person's sexual orientation. Homosexuality was the outcome for around 10% of people in every country and culture, and in the higher mammals. Homosexuality was therefore not of one's choosing but of one's being, and so part of the natural order. This made it necessary to rethink age-old moral and cultural taboos.

If that is so, it's hard to believe that the Spirit would be saying to the church: ''Ignore all that! Stick with the understanding of biblical writers who could have known nothing about it.''

At the very least, churches must relate to the world as it is, not was, and develop their moral teaching accordingly to promote an ethic that is life-enhancing for both individuals and society. That applies across the board - to heterosexuals and homosexuals, married and unmarried, men and women, young and old.

Now, the General Synod is tiptoeing gingerly towards acceptance of ''right-ordered intimate relationships between two persons regardless of gender'' - leaving open what is right-ordered and what is not.

But the Anglican future will include marriage as traditionally defined, plus a liturgy to bless same-sex unions (and meantime ''recognise'' them, though not as marriage or by a rite of blessing), plus an opt-out clause for clergy who object, with implications of all this for ordination to be teased out later.