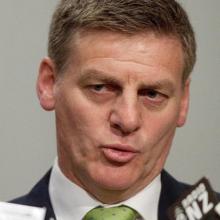 Bill English
Bill English and Paula Bennett are now assembling their ministry. Their task: to continue the Key government without John Key but also to demonstrate they are not the Key-government-without-Key.

That is no small feat. Policy lurches would disorient supporters and look like a Government no longer in control of the agenda. Too much of the same with minor tweaks would leave voters stuck in the Key era but without Mr Key and highlight his successor's popularity deficit compared with the real thing.

Mr English's charisma bypass is a match for Andrew Little's, who last week was smiling ear to ear. Winston Peters and James Shaw outpoint both.

Like Mr Little, with Mr English what you see is what you get - but first people have to see him. Business, economists and policy wonks do see him and enthuse. But they are a small minority.

To pitch widely, Mr English will need the presentational training he rejected when heading to his disastrous 2002 defeat.

Bouncy Bennett has media presence but is light on gravitas. She can turn off as well as on (ask any mayor). And she is not leader (yet).

They are unlikely to recreate the Key-decade complementarity in what was actually the Key-English government.

Mr English was the conservative and Mr Key the liberal, personifying National's dominant strands when at its strongest.

Mr English was the behind-scenes heavy lifter in fiscal, economic and much social policy. Mr Key was the presenter, calming, jollying and ``selfie-ing'' the public, including many who did not think of themselves as National.

They combined these differences in an operational mode Mr English described to an Australian audience in mid-2015 as ``incremental radicalism'': incremental changes over time, none too frightening to too many horses, which cumulatively amount to radical change.

To the extent there is much to show for Mr Key's often restated wish for his legacy to be what he did for disadvantaged children, it will be principally the result of Mr English's work with various ministers, still very much a work in progress. But Mr Key did back him.

Mr Key had a talent for easing out underperformers, non-performers and the politically ageing without eruptions or fractiousness. His 2014 cleanout meant just under a quarter of the current caucus came in in that election, including some of promotable calibre, for example, Todd Muller, Chris Bishop and Barbara Kuriger. They joined some able 2011-14-term arrivals.

So Mr English and Ms Bennett have the raw material to refresh the ministry so that it doesn't look too much like the Key-government-without-Key.

But to do that some politically ageing and less-performing ministers must depart. Have Mr English and Ms Bennett the authority Mr Key would have had to do that? And, if they do it anyway, will the leavers go quietly?

Refreshment also implies policy change. Mr English, Ms Bennett and new Finance Minister Steven Joyce have to balance pointing towards a different-looking fourth-term government and not appearing to veer off course or have an attack of nerves.

Judith Collins and Jonathan Coleman in their brief trots last week implied Mr English has been too tight-pursed in their portfolios, as a torrent of immigrants and an ageing population drive up costs.

Science and research got a Key-English-Joyce skimping. By 2020, state funding will have been static in GDP terms for a decade, far below the OECD average. (Last week's column, as originally filed before Mr Key's skedaddle swept it aside, detailed this. It will be revisited in 2017.)

Messrs English and Joyce will be under pressure to be less sceptical on climate change. Ms Bennett has made noises. Simon Bridges wants more action on transport and energy. Younger MPs - and younger voters - agree.

Other challenges among many include adjusting superannuation, responding to changes in ``work'' and earned income (where Labour is well ahead), getting coherence into scattered housing initiatives - and being abreast of the Treasury's development of its living standards framework into a ``wellbeing framework'' which injects ``people'' into numbers-obsessed economics, as government economists discussed at a conference last week where Mr English gave the opening keynote.

That doesn't of itself doom Mr English. But it is a wispy cloud on his horizon. Symbolically, as he held his acceptance press conference yesterday, a cold southerly blew into Wellington. Southland had arrived - and, with that, the end of National's golden weather?