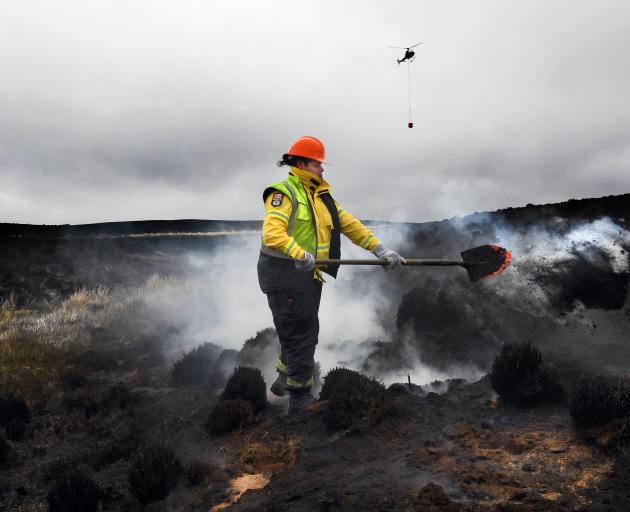 The overwhelming temptation to declare ‘‘I told you so’’ I can no longer resist. The date of the occasion that I refer to has been clouded by the mists of time, but it was probably in the late ’90s when I, as an elected member of the Dunedin City Council, was confronted by the most manic proposal to prohibit the grazing of the city’s water catchment.

Why do I say manic? Because it was an exercise in idealism driven by misguided personnel who had never had to fight a mountain fire, or who had never witnessed the absolute desolation and the consequential loss by summer fire (forever) of precious water-capturing vegetation.

‘‘Embrace this puerile proposal and the city will one day have no water’’ was my plaintiff plea in opposition to the proposal to buy the city’s water catchment, destock it, allow the consequential over-growth of the snow grasses to the (maybe) height of a man on a horse ... and with the litter thus generated to fuel it, there will be a holocaust of a magnitude that no man has ever before witnessed.

And if it’s a hot summer fire (I postulated) it will burn to the roots of the vegetation. And there will be no water in Dunedin; forever! Why did I consider myself fit to make such a prediction?

Though I am uneducated in an academic sense, I am a son of the soil. For 30 years I farmed the challenging and snow-clad heights of the Rock and Pillar Ranges.

Against the theoretically driven hysteria of the ‘‘green fraternity’’, we guarded against the risk of a devastating summer fire by having management spring fires, and against all academic advice, we’d burn on a windy day, when the root system of all vegetation still had wet feet and would thus be unchallenged.

The purpose of this practice was twofold. One was that a quick fire only took the top off the snow grass, and it was this ‘‘top’’ that (if left unchanged) would become the ‘‘floor litter’’ that would fuel a summer fire.

And secondly, with the green shoots of the regrowth and the absence of any litter on the floor, there was nothing to ignite or fuel a summer fire that would threaten the life of the vegetation so critical in its purpose to retain and slowly release precipitation of any form.

We (the guardians of the land) learned by example. And the most enduring example of ‘‘what not to do’’ was presented to us on a sunny face where an accidental summer fire had occurred the year before we purchased that land (1965).

In the following 30 years that we farmed that mountain, no plant life ever regenerated on the site of that fire. And why not, you may ask? A heavy fall of snow would have covered that face in the following winter, and when the spring thaw followed, rather than quietly moving away, and feeding the stream below (as it would have if there had been ‘‘rooted vegetation’’ to slow its movement) the snow instead would have avalanched.

And as it avalanched it would have stripped from its rocky bed the meagre and precious soil that had taken millions of years to establish and delivered it to the mountain stream below.

That precious soil is now somewhere in the Pacific Ocean. I have not needed a Harvard education to have understood all this, and this is the hands-on experience that I attempted to bring to that council meeting’s proposal so many years ago.

But though Dunedin is a huge rural local authority of 3600sq km, it is presided over by a majority of urban councillors who had never had dirt under their fingernails.

And decisions are made on the basis of numerical might, rather than any sense of reason. And that day the security of the city’s water supply was vandalised. That recent fire is just an appetiser; the main course is yet to come. It gets worse!

The city has a tiger by the tail in the presence of its doubtful neighbour, the Department of Conservation, who contemporaneously wrested a huge slab of tussock land from Rocklands Station. This land lies adjacent to the (now owned) city water catchment.

In my day, before we went on to the tussock land in the summer season, everybody was made to put their cigarettes and matches in a bucket (or such vessel), and everybody smoked! That was an unwritten law, and how seriously we respected that country.

Now that that country’s guardianship is in the hands of Doc. They seem not to have engaged in any form of environmental care and just to rub salt to the wound, I’m told that recreation on that land is encouraged.

Can one imagine what a spark from a 2-stroke motorcycle might do to the city’s water supply? Can we have any confidence that Doc, who operate under the banner of conservation, is anything other than the rogue neighbour that the city council and its water catchment does not need?