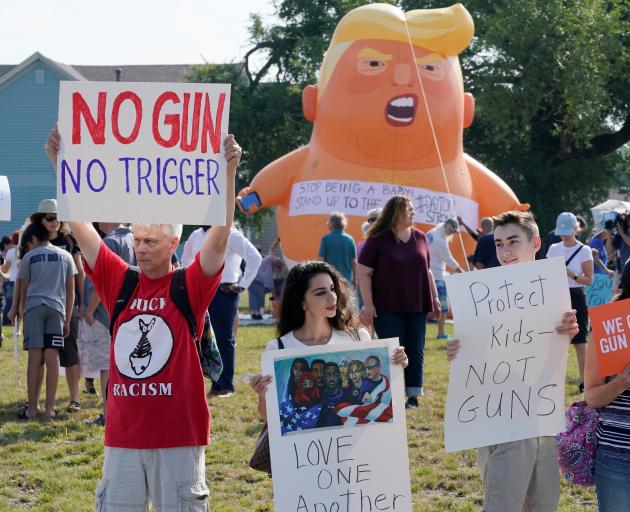 Protesters gather around a baby Trump balloon to voice their opposition to gun violence following a mass shooting in Dayton earlier this month. PHOTO: REUTERS
There's a word for people like the El Paso and Dayton shooters, writes Gina Barreca.

Donald Trump called the shooters in Dayton and El Paso "monsters", but the trouble is that they aren't monsters. Not really.

What they are is meek - at least as some hermeneutics scholars have defined the term.

The concept of "meek" as used in the Bible emerges from the concept of "praus", a Greek military term. According to numerous sources - some secular, some faith-based, yet all oddly employing precisely the same words - "Wild stallions were brought down from the mountains and broken for riding. Some were used to pull wagons, some were raced, and the best were trained for warfare. They retained their fierce spirit, courage, and power but were disciplined to respond to the slightest nudge or pressure of the rider's leg. Then they were said to be meeked."

The shooters are the sons of America - we raised them. We've taught them everything they know.

Perhaps we broke them.

Our leaders certainly sought and received a great deal of their attention. Our leaders enjoy rallying supporters and reassuring them that all those working towards the same goal and understanding the unspoken underpinnings of the message will, when the day comes, be rewarded for their loyalty.

Mass shooters are meek, therefore, because to be meeked was to be rendered entirely dependent upon one's master. Neither humble nor gentle, they are instead, as churchman Thomas Fuller wrote in 1732, "revengeful and implacable".

Fuller kept his head during the English Civil War when others were losing theirs by understanding, while not respecting, the threat posed by those who had been bridled.

Then, as now, for the first time in their lives, they had a script for becoming masculine, meaningful and - the opposite of meek - menacing.

My friend, attorney John Myer, reminded me that when Trump lamented at a May rally in Panama City Beach, Florida, "How do you stop these people? You can't," someone in the crowd yelled back one idea: "Shoot them." The audience of thousands cheered and Trump grinned. Shrugging off the suggestion, the president quipped, "Only in the Panhandle can you get away with that statement."

So why do young men feel a need to turn military-grade weapons against people they perceive as enemies? Do they believe having a target gives their lives a sense of purpose?

Targets are all about focus, after all, and having the bull's-eye demarcated by someone who claims to know what is right is nothing if not convenient.

Yes, it's getting worse. No, it's nothing new.

"Violence is the quest for identity," wrote cultural critic Marshall McLuhan more than four decades ago. "When identity disappears with technological innovation, violence is the natural recourse."

McLuhan warned that when frustrated media consumers realised their actual lives were never going to resemble those of their idols, their favourite television stars, rock stars, country singers, or even the beautiful people in commercials, they would be driven to wreck the apparatus. In 1970, McLuhan predicted that World War 3 would be a "guerrilla information war with no division between military and civilian participation."

Shooters play Simon Says; they play follow-the-leader, just like the praus. But having convinced themselves that the leader knows what they're thinking, the praus, in turn, begin to believe they know how to interpret what the leader is saying - even when he isn't saying it, exactly.

Quivering underdogs start telling themselves, and each other, that they'll become alpha-males, morphing swiftly from prey to predator, as soon as they get their hands on the perfect piece of equipment. Were they only able to get muskets, cudgels and brass knuckles, it would be less worrisome.

"I of course support the Second Amendment," wrote Texas columnist Molly Ivans in 1993. "It means exactly what it says: `A well-regulated militia being necessary to the security of a free state, the right of the people to keep and bear arms shall not be infringed.' Fourteen-year-old boys are not part of a well-regulated militia . Permitting unregulated citizens to have guns is destroying the security of this free state."

Thomas Fuller, having endured the wrath of the meek, warns us not to "play with the Devil's rattles". Placing dangerous toys in unstable hands will help no-one and divide many, and the only thing any of us will inherit is the wind.

-  Gina Barreca is an author and distinguished professor of English literature at the University of Connecticut.