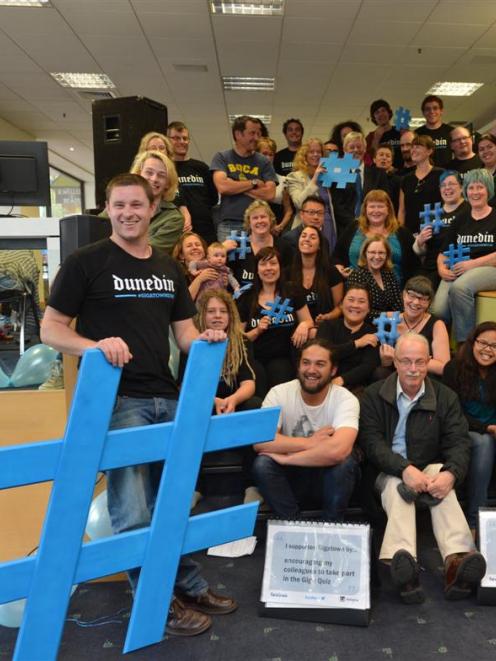 The Dunedin Gigatown team last year. Photo by Peter McIntosh.
Calvin Oaten, of Dunedin, is sceptical about the benefits and costs of Gigatown.

We, the citizens have been assailed by the hugely promoted opportunity to be the first city/area, to be fitted out with the technological marvel of the age, ultra-fast broadband, or UFB.

Furthermore, we have won that opportunity.

High-fives all round after a sterling effort, not to mention many hundreds of thousands of dollars of citizens' treasure being expended.

I, and I expect a great many other folk, have no idea what this is all about, but obviously joined the fray which resulted in this joyous victory.

So, what is it, this magic elixir?

I decided it was time to find out a little of the mystery.

It seems it is all about speed of transmission and receiving of information via the internet.

These accumulate as the message grows.

The rate of transmission is measured in seconds, the accumulated ''bits'' are weighed and counted into parcels of one million each.

These parcels are called ''Megabits''.

I myself have a package from Spark (formerly Telecom) which consists of a connected telephone, plus an internet modem with Wi-Fi, that costs me the sum of $75 per month, subject to extra for any toll calls made.

I suspect that many have the same.

Now this allows me to use my computer to email my ''stuff'' to friends, relations, anyone at all, including the ODT.

I can compose my message, address it, and send it quicker than I could lick a stamp.

My modem is fairly modern, and I have been led to believe it is capable of handling up to 24Mbps or 24 million bits.

It seems to do everything I want at a very acceptable speed.

I accept that greater speed would aid in the downloading of items like films, video games and so on.

The commercial folk, of course, it seems can never have too much speed.

Places like the Otago University I can well understand need speed.

So how does my 24Mbps compare with the 1 Gigabit town we are about to become?

That's right, one thousand Mbps or a billion ''bits''.

An increase over mine of 976Mbps.

That must be like switching the light on and off a billion times in a second.

So, if it ever became possible for me to latch on to that system I doubt very much that it would be for $75 per month.

In fact, I couldn't envisage the average household being enticed into what is obviously an excess of capacity for its daily requirements of the internet.

The fact Dunedin is only 40% reticulated with fibreoptic cable means that it could be years before the population at large gets a look in.

As a matter of interest, while Dunedin may have won the ''Gigatown'' competition, Oamaru is the first town in New Zealand to have its network fully upgraded to UFB.

This suggests to me that it is aimed purely at businesses and very few of them, at that.

So why should that not be seen as a choice for business to make between itself and its ISP (internet service provider)?

Why is it that the ratepayers need to foot the costs of the requested $250,000pa to run a ''Digital Office'' other than it being seen as ''jobs for the boys''?

I might be wrong, but this seems to me to be the result of overenthusiasm over a very craftily structured ''promotional marketing'' exercise by Chorus which has been incredibly successful.

The magnanimous offer of cheaper rates for three years is bait, while the $700,000 of UFB-related initiatives would be only what is necessary to implement the system, anyway.

There are some serious questions here needing answers.