When I was 10 years old, a travelling brass band came to town. My primary school class trotted down to the town hall, and there we listened to a spectacular concert, our eyes wide and and our attention unwavering.

Finally, the band readied themselves for the last song. ''This is one you'll all recognise,'' said the conductor, ''Put your hand up if you know where it's from!''

As the band began tooting away, everyone's hands shot up into the air - except for mine. I had no earthly clue where this music was from. I had never heard it before.

Turns out, it was the theme song from The Simpsons. But I had never seen an episode of The Simpsons in my life.

You see, I grew up without a television. Being old-school Presbyterians, my parents didn't want to expose me and my siblings to the ''sins'' of the outside world (reality shows and cereal advertisements). They considered television a ''time-waster'' and would insist that reading was a far better pastime.

When I was young, I felt indignant and upset by our household's lack of cartoons, movies and reality shows. But now, as a young adult, I'm grateful to my parents for refusing to let a TV into our house.

A great deal of research has shown that too much television can negatively impact on a child's behaviour, achievements, and health. Studies have also revealed that an infant's exposure to TV is linked to delayed language development and kindergarten-readiness skills, as well as attention disorders and sleep problems.

Although advertisements blaring from the television cry and holler that certain TV programmes and DVDs (i.e. the ones they're selling) help children learn, studies have shown that TV consumption essentially equates to empty calories for an infant's growing brain.

For children younger than 3 years old, TV shows and DVDs are not effective teachers. Instead, they often replace healthier activities, such as playing outside, and instil a habit for heavy TV consumption from a young age. A baby's brain is not wired to understand television, but it is primed to learn from social interactions.

Many studies have shown that babies learn better from people than from moving images. Endless episodes of Baby Einstein should not replace positive interactions with parents and caregivers.

Admittedly, after the age of 3, things change a bit. Well-designed interactive TV shows, such as Sesame Street and Dora the Explorer can teach children some skills, from literacy, maths and science to prosocial behaviour. And for me, there were a number of downsides to growing up without a television. I'm still pop-culture illiterate, all these years later. I have never seen an episode of Friends, Kim Possible, Full House, Greys Anatomy, or Doctor Who.

On a more serious note, I was also ignorant of current affairs as a child. It wasn't until I was 8 years old, covertly watching revelations of the Soham murders on the news at my friend's house, that I realised how depraved people could be.

People look at me strangely when I tell them I grew up without a television, and as a child, this bothered me. I also became strangely fixated whenever a television was playing in a room. In Media class at high school, I loved watching ancient KFC ads, and to this day, I can't focus on anything else when a TV is playing.

Perhaps my favourite benefit of my TV-free childhood was that my imagination was given free rein. Instead of watching other people's imaginations on the telly, I could read books, and construct my own version of Narnia or Middle Earth in my mind's eye.

My siblings and I spent hours playing outside on the farm, and with all our free time, we'd devised our own (rather weird, admittedly) games.

Growing up without a TV also taught me to be selective about what media and programmes I consume. I now have access to a laptop, but every time I watch a film or TV episode now, it's something I've carefully chosen. I also grew up without being bombarded by constant advertising and gender stereotypes perpetuated by ads and certain shows.

My family spent more time talking to each other, without the blare of the TV in the background to distract us. This often led to arguments, but that was to be expected.

I left home six years ago, and while I have discovered a love for crime thriller movies, Quentin Tarantino, Snickers commercials, and Campbell Live, I've resisted the urge to buy a TV. If I really want to watch something, I can access it on my laptop or phone.

If one day I become a mother, there won't be a television in my house. 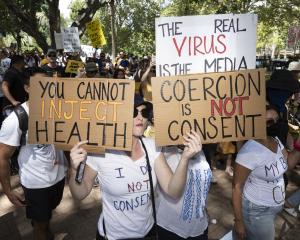 People still only have a piano at home, which they gather around to sing 'Be Thou My Vision', by the Methos.

Call that fitting in?