Govt should come clean on effects of TPPA 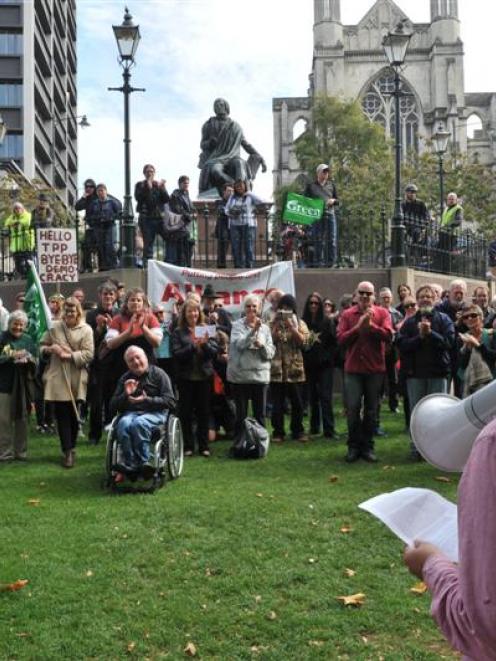 About nine months ago, our community gathered in the Octagon to oppose the GCSB and TICS Bills, and the capacity of the state to spy upon its citizens.

On Saturday, we stood in the same spot to deliver that very same message back at them. If there's nothing in the proposed Trans Pacific Partnership Agreement that we should be alarmed about as a sovereign nation, why is there such unprecedented secrecy over its contents?

If the Government has nothing to hide, it shouldn't have anything to fear.

Several local authorities have passed resolutions calling for an end to the secrecy around these negotiations, and for that they've been criticised by the Government's cheerleaders for meddling above their station. That attitude is exactly why local government should be concerned about the TPPA.

This Government isn't interested in how our communities want to organise themselves, and what that looks like. The supercity merger in Auckland and the sacking of Environment Canterbury are just two egregious examples.

The Government's also not interested in listening to what we have to say about legislation that has a very real impact on our communities. Consultation periods are very frequently very short, and at times a cynic may rightly suggest they're designed to limit the debate.

Asking for local body feedback in the middle of local elections doesn't speak to me of a government wanting to hear an answer.

Because I have no confidence it is even thinking about the day-to-day effects of the TPPA on our cities, towns and regions, it's important people who consider those things important get to see it. As long as it is under wraps, that can't happen.

For the safety of all of us, that is exactly what needs to happen. The Government has to maintain the right to set laws for the good of public health, consumers, workers and the environment.

These are all now bargaining chips to be traded away to benefit big business. No government should have the right to sign agreements that bind all generations that come after them, as this does.

The TPPA is being negotiated behind closed doors with a level of secrecy completely unacceptable in a democratic society.

Almost everything we have learnt about its contents comes from leaked documents, but it isn't completely secret.

Representatives of AT&T, Verizon, Cisco, major pharmaceutical companies and the Motion Picture Association of America have access to the text, while democratically elected members of Parliament, health and environment advocates and ordinary citizens are being left out in the cold.

The leaks reveal foreign investors and firms could sue New Zealand in private if we pass laws that reduce their profits or adversely affect their business.

This could impact negatively on future governments that want to introduce legislation to protect public health and the environment. It would make plain packaging of tobacco more difficult. Subsidised medicine through Pharmac is under threat.

I have no reason to believe that weakening of our ability to favour local producers for government contracts isn't also on the table.

Of course, we don't know, because they won't tell us. Not that they have anything to hide, of course. Small and medium-sized software and IT businesses will have their innovative visions stifled by constraining patent laws.

Dunedin has a strong and growing ICT sector, among the low-weight, high-value exports critical to our city's economy long term.

This is why local authorities have passed resolutions critical of the TPPA process.

They feel their community deserves to know what they're being signed up for and how it will affect them. By refusing us this opportunity, this Government is showing it doesn't care about local communities, their struggling small businesses or the people who work for them.

They're interested in appeasing corporate giants, and to hell with the consequences. Releasing the text isn't without precedent.

In 2001, the US Government published all nine chapters of the Free Trade Area of the Americas Agreement. At the time, this was called an `important step'' that would make the trade negotiation process ''more transparent and accessible''.

If this was the standard for public accountability in 2001, it is disconcerting similar standards are not in play in 2014.

New Zealand should only support fair, genuinely progressive trade agreements that promote sustainable development, and the creation of new jobs, alongside the protection of our environment and human rights.

I call on our Government to remove the veil of secrecy surrounding this agreement and to open these negotiations to public input and comment.