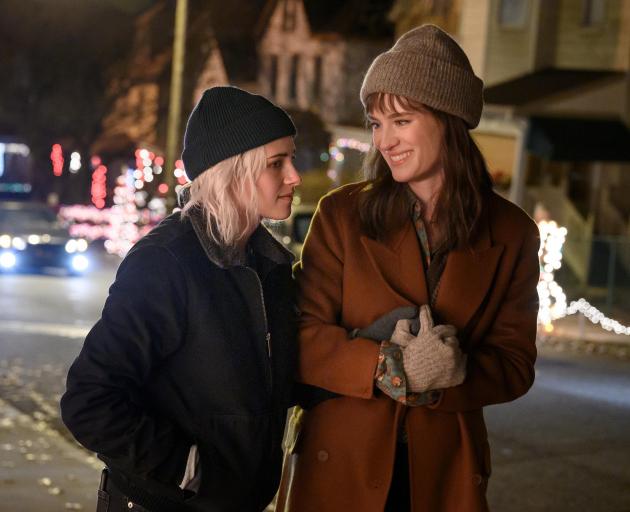 Perhaps it’s the warmly glowing lights strung up between lampposts in town, or the towering Christmas trees in my college quad. Perhaps it’s the stores jam-packed with shoppers searching for the cheapest possible gifts they can get for far-flung relatives, or the incessant emails from friends and co-workers about the office secret Santa you simply must be signed up for.

Don’t get me wrong; I adore Christmas movies. There is nothing I love more than putting on Love Actually, The Holiday, or The Snowman in the background while I clean my room, paint, or pack my suitcase for returning home to New Zealand.

But this year, I was happily distracted by the first mainstream LGBT+ Christmas romcom, Happiest Season. It may be saccharine, tinsel-swept and studded with B-listers, but in a genre where queer characters predominantly exist as sidelined, one-dimensional figures, Happiest Season is a small but significant revolution.

Director Clea DuVall is of course something of a lesbian icon herself, ever since starring as the love interest in 1999’s But I’m a Cheerleader. In September, she tweeted: "All I ever wanted was a holiday movie that represented my experience so I decided to make one." And she has, admirably so.

Happiest Season revolves around a lesbian couple, Abby (Kristen Stewart) and Harper (Mackenzie Davis), who intend on visiting Harper’s family for Christmas. Abby is swept up in first love and intends on proposing to her beloved. But at the last possible minute, a mere bend in the road from her family’s house, Harper informs Abby that she’s not out to her parents, and asks her girlfriend to play along as her straight friend and roommate. High jinks ensue. With the added pressure of Harper’s neurotic and overbearing family, Abby must navigate being forced back into the closet during the "happiest" time of the year.

Happiest Season relies on a conventional framework, and this is perhaps where its magic lies. It lulls us into a warm and recognisable sense of security from the very start. The audience is reassured by the very structure of the holiday romcom genre. For queer people, such films are few and far between. LGBTQ+ characters are regularly portrayed as criminals, hypersexual and perverted villains, or miserable, tortured souls, if they are portrayed at all.

The majority of LGBTQ+ films are deeply miserable, and you can rest assured at least one of the queer characters will end the film resting six feet under.

That being said, Happiest Season isn’t exactly a barrel of laughs. There is a bit of slapstick comedy involving a sisterly squabble and a tipped-over Christmas tree, and plenty of awkward situational humour. Rather, the film is actually heartbreaking at times. At Happiest Season’s opening, Harper is a fun, bubbly and caring girlfriend, determined to make Abby see the best of the Christmas season. But upon arriving at her family’s home, Harper comes to resemble a pale imitation of herself, robotically echoing those around her. It’s horrendous watching their relationship disintegrate, and when Harper insists she needs space, you can almost hear Abby’s heart break. But you can rest assured that there will be a happy ending, simply because Happiest Season is a romcom, and romcoms always have happy endings. There is great relief in that.

I have argued before on the importance of queer representation for young people. We need to see ourselves in movies, advertisements, books and television programmes. We need to know that we’re not alone, and that what they feel is not abhorrent or unnatural. Equally importantly, straight people need to be exposed to the intricacies (and mundanity) of queer lives and relationships, in an honest, open and unfiltered way.

Happiest Season, besides centring on a lesbian couple, doesn’t do much in the way of providing diversity. The cast is predominantly white, able-bodied, neurotypical and cisgender. Abby’s best friend John embodies far too many "gay best friend" stereotypes, with seemingly no background story or family, snappy comebacks at the ready, and buckets of sass.

But John does expand beyond the constraints of this stereotype when he consoles and counsels Abby on Harper’s reluctance to come out to her family. John gives an impassioned and authentic speech on the sad reality of holidays for many queer kids returning to the family fold. I know personally how excruciating it can be to come out to one’s family, and I am myself feeling incredibly anxious about returning home for Christmas, even if I don’t have a girlfriend trailing behind me.

Happiest Season may not be perfect. But it reminds us that the point of the holidays is to be with friends, family and loved ones, celebrating love, joy and making it through the hellscape that is 2020. Most importantly however, it is the first step towards more happy love stories about queer women, and for that I’m grateful. Merry Christmas!