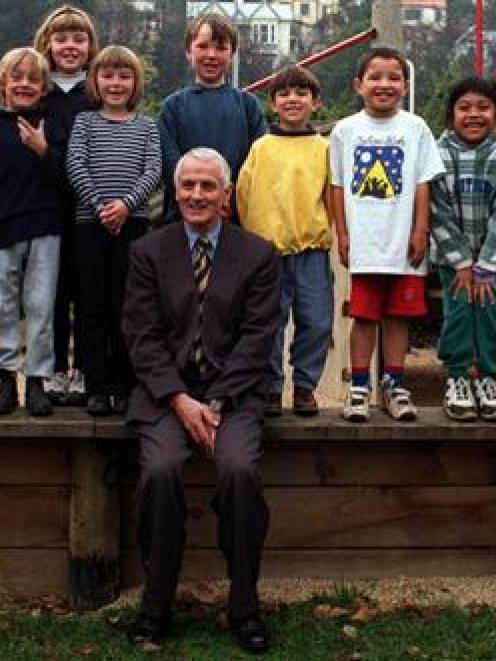 Danny Knudson: "Current practices focus on teaching and learning according to each child's ability . . ." Photo by Peter McIntosh.
Long-time primary school principal Danny Knudson looks at the history of "standards" in New Zealand and of the ill-fated "national standards" regime in the United Kingdom.

"The term "standards" in primary schools evolved from the set of prescriptions promulgated in Otago in 1874 and nationally in 1878.

From then, children in standard 1 prepared to meet the standard required in the first examination administered by school inspectors, hence the term standard 1.

Pupils who passed progressed to standard 2 and so on.

Able pupils attending New Zealand primary schools prior to 1936 normally stood a good chance of meeting the standards and passing the examinations, but did they derive advantage? Not when bright children were comparatively ignored while teachers concentrated on pupils likely to fail.

Teachers typically gave up on pupils not likely to pass the examinations.

Children who failed to pass to the next standard were left behind to become older than their classmates in subsequent years.

Imagine the damage to their self-esteem.

If they did not improve their achievements before the next year's examinations, they were in danger of being told to stay away on examination day.

Many slow learners were left in the infants' class known as Class P, the Preparatory Class, where there were no inspectors' examinations.

About one-third of school rolls were retained in Class P with pupils aged from 5 to 13 years and even older.

If a school subject was not examined, it was comparatively ignored by teachers.

Methods of teaching included excessive homework, endless rote learning, as well as cramming of information in preparation for inspectors' questions.

Children were instructed in the content of examinations rather than educated in the full curriculum.

The focus was on securing a pass for as many children as possible so that teachers and schools appeared "efficient" in published pupils' examination results.

Teachers of standard 5, for example, instructed all pupils in the same programme irrespective of their age or ability because all were preparing for the same national standard.

By contrast, with smaller classes in today's schools, teachers individualise learning to a far greater extent.

Current practices now focus on teaching and learning according to each child's ability rather than the age.

In 2003, it was my privilege to visit England on an Otago Primary Principals' Association scholarship.

My intended research was educational provisions for gifted children, but what primary teachers wanted to talk about most were national standards and the testing regime that accompanied them. Motivation for introducing standards was to increase the proportion of pupils aged 7 and 11 years who could meet achievement levels.

The curriculum emphasised those subjects that were examined.

School inspectors were aware of the curriculum contraction and in 2003 were instructing schools to re-establish neglected syllabus areas such as art, music, social studies, and physical education.

I asked school advisers at what level teachers pitched their teaching.

They clarified that teachers worked most closely with the average children to help ensure they would meet the standards.

Examinations were dreaded by the children, their teachers and principals. Some teachers confessed that they did not want to teach classes scheduled for examinations, but for those assigned the 7- or 11-year-olds, teachers preferred to teach bright pupils.

Principals whose pupils registered a very high percentage of passes one year, realised their results might not be sustained with a different school population in subsequent years.

Any decline, though, jeopardised their job security.

Parents anxious to help their children meet the standards bought examination practice books available by the dray-load in book shops.

I did not investigate what it meant for parents whose children failed to reach the standards, but I did feel sorry for any children "branded" by "failing".

Bright pupils were given lots of activity work to complete independently in class, much of it computer generated and repetitive. These capable youngsters were comparatively neglected to the point that school inspectors had recently begun requiring schools to identify their gifted pupils and report what special educational provisions were being made for them.

One of the striking outcomes in England was the production of elaborate league tables in newspaper supplements listing all schools in the country and the percentage of pupils who had "passed" each of three subjects tested, English, mathematics, and science.

Tables listed "top" schools with highest pass percentages, and "bottom" schools with fewest passes including one large school in which no pupil met any of the national standards.

Local education authority districts, the equivalent of provinces in New Zealand, were also ranked like Super 14 rugby teams, and the average for all England was calculated.

There was nowhere to hide from media scrutiny, not even for the secretary (minister) of education.

Her national targets were not achieved after three years despite concerted efforts by teachers and additional resources provided to schools, and she felt obliged to resign.

Some people might have been persuaded that the "best" schools were those in which most pupils met or exceeded the national standards.

The league tables looked credible, but in reality their data was so simplistic and incomplete it lacked validity.

Those who subscribe to the idea that children could transfer to schools with higher pass percentages might ask, if that happened in New Zealand, would we want a proliferation of "bottom" schools for children who could not gain access to "top" schools? After 11 years of monitoring children against national standards, and in response to representation by teacher organisations, extensive modifications were made in England in 2003.

The new secretary of education announced that national standards would be scrapped and replaced with targets set by local schools (The Times, May 20, 2003).

This resembled the concept of self-managing schools in New Zealand.

After 45 years as a primary school teacher, I consider that "good" schools do help children record high academic standards and register pleasing progress, but they do many other things as well to nurture children in wide-ranging and exciting programmes.

They help children to feel positive about themselves and their learning, their progress is monitored using a variety of strategies, and information is shared with parents and care-givers.

None of this necessitates national standards.

My message for the Ministry of Education, whose members are charged with responsibility for informing and guiding the Minister of Education, is to communicate the shortcomings of national standards. Work collaboratively with parents, teachers and principals to safeguard children so as to not jeopardise the quality of teaching and learning established in primary schools.

Better to abort one flight than damage the whole air force.

Avoid rushing rashly into practices that will reproduce the restrictions for children as demonstrated in New Zealand in former times, or some of the disadvantages for children as shown by national standards and testing in England recently."

• Danny Knudson was principal of George Street Normal School, 1982-2004. He has studied early education in New Zealand and aspects of education in England.