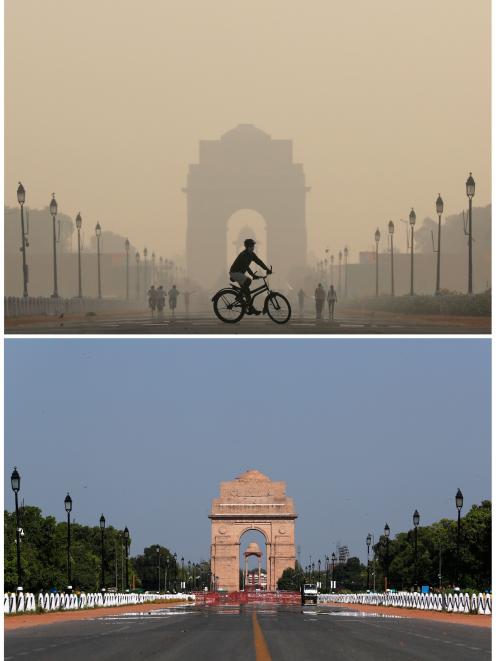 New Delhi’s India Gate war memorial in 2019 (above) and after the air pollution level started to drop during a nationwide lockdown for Covid-19. PHOTO: REUTERS
Covid-19 provides us with an opportunity to think afresh about what the world should look like, writes  Murray Rae.

In Luke’s gospel the story is told of two of Jesus’ disciples walking the road to Emmaus, a village about seven miles from Jerusalem.

Three days earlier the disciples had witnessed the crucifixion of Jesus. The one in whom they had trusted, the one who they dared to believe was Israel’s Messiah had been brutally killed at the hands of the Roman authorities.

Their hopes had come to a tragic end. Earlier that day, however, some women who were followers of Jesus — Mary Magdalene, Joanna, and Mary the mother of James — had visited Jesus’ tomb and found it empty. The body of Jesus was no longer there. Two men at the tomb declared that Jesus was alive and the women rushed to tell the other disciples. To begin with however, the women’s story was too much for the disciples to believe. They considered it to be an idle tale.

And so, later that day, the two disciples made their way to Emmaus, dejected, bewildered, and unable to make sense of all that they had seen and heard.

As they were walking, Jesus himself came near and began to walk with them on the road. Strangely, however, "their eyes were kept from recognising him".

It’s a telling phrase. In the colloquial language of our own day, we might say that the disciples simply couldn’t get their heads around the idea that the one they saw crucified had now been raised from the dead. Of course they couldn’t!

They were confronted by a reality that simply couldn’t be accommodated within their prior estimations of what is and is not possible in this world. It took time for their blindness to be overcome. It took time for the disciples to discover that the world had changed and that the forces of death that nailed Jesus to the cross no longer had the last word.

I wonder whether our current struggle against Covid-19 might help us to see reality in a new light, to imagine a different way of ordering our world? Our eyes are being opened, for instance, to how essential the "lowly" workers among us — the shelf-stackers, the checkout operators, the fruit pickers — really are.

We recognise now how vital they are to the wellbeing of all. Might we imagine a new reality in which they are paid what they are really worth? A living wage would be a good place to start.

Reports are coming in from around the world about the lockdown giving our environment a reprieve. People in the smog-filled cities of China are beginning to see and breathe clear air.

Dramatic reductions in the level of pollution have enabled people in northern India to see the Himalayas for the first time in 30 years. Can we imagine a new reality in which the smoke stops belching from polluting factories, fossil fuels are left in the ground, and we learn to live more responsibly, more sustainably, in our world?

In cities around New Zealand, the homeless have been gathered up and given places to stay that are warm and comfortable and offer relief from the suffering of life on the street. We have found the resources to ensure that those normally excluded get to share in the common good. Can we picture a reality in which that resourcefulness becomes the norm?

Covid-19 provides us with an opportunity to think afresh about what the world should look like once the threat of the virus has been subdued. Is a new reality possible? Can we take stock, and muster a new determination to tackle those other features of our life together that threaten the common good?

The two disciples walking toward Emmaus could not imagine a world in which the powers of death no longer held sway. And so, to begin with, their eyes were kept from seeing the new reality that lay before them. It was not until the evening when Jesus broke bread and blessed it and gave it to them that their eyes were opened and they recognised the risen Lord.

Ever since that first Easter encounter, Jesus has been inviting us to share in a new reality, a new way of being human. In this new reality the poor hear good news, the blind see, and sinners are forgiven.

In this new way of ordering the world, swords are beaten into ploughshares, the hungry are fed, the homeless are given shelter, and fruit harvesters are sent home each night with a wage sufficient for their needs. Is it too good to be true?

Our inclination to think so is not a sign of the impossibility of such a world but rather of our lack of imagination and of faith.

- Murray Rae is Professor of Theology at the University of Otago.