Hyde St party has had its day 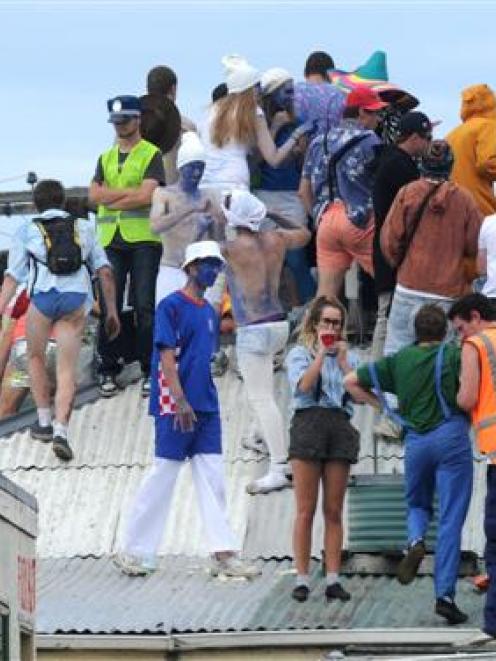 I am one of the breast-beating bullet-heads OUSA president Logan Edgar refers to, because I have concerns about damage to my own property and also the safety of young, intoxicated people who make bad decisions.

In his opinion piece (30.3.12), Mr Edgar fails to come up with any suggestion as to how people can be stopped from breaking windows, pulling down spoutings and smashing in roofs (incidentally, we have never charged our Hyde St tenants any extra rent to cover damage). The students were on notice this year that all eyes were on them at the Hyde St keg party.

Organisers did a very good job of taking reasonable precautions to make it trouble-free and safe, yet a few dozen airheads (as opposed to bullet-heads) spoiled their good work.

You have to ask yourself if people who launch themselves from roof to roof, or bounce up and down until it collapses, need to be protected from themselves, especially when they refuse to come down when instructed repeatedly by police.

Mr Edgar asks why, if North Dunedin has a liquor ban, shouldn't the rest of the city?

Well, if groups of people start climbing on to roofs in Maori Hill or Caversham (and are not charged by the police) I think most of us will support such a ban. But, in the meantime, the fire-lighting and destructive behaviour is heavily concentrated in North Dunedin.

If this behaviour were to involve another ethnic or social group in another part of the country, the full weight of the law and the populace would come down on them.

Despite reported improvements in the last couple of years due to various initiatives, there is still something wrong when the police cannot, or will not, charge people who deliberately damage others' property.

Mr Edgar says there is no evidence of street disorder, e.g. numbers of arrests or complaints. I say a picture tells a thousand words. I could compile quite a list of repairs costing thousands of dollars which we've carried out over the last few years should anyone wish to see it.

Most has occurred during the Undie 500 events, and has not been reported to the authorities because they were there and saw it. We even had a house set on fire and it was only the actions of a sensible older person living among the students who spotted it and called the fire brigade that saved a serious blaze which would inevitably have also involved the adjacent wooden house.

There have been numerous broken windows, broken clay roof tiles which have caused multiple leaks and necessitated new ceilings; plus the recent damage to our roof and ceiling in Hyde St, a roof which was in good condition. Even if we can claim insurance, there will be an excess of about $500.

No-one begrudges the students good times and their presence enlivens our city. By and large we value them tremendously and want them to enjoy our city and their Otago Uni experience. But they are here for only a short time and we as landlords are here for the long haul.

The same mindless damage inflicted year after year tries our patience and sense of humour. I agree with Mr Edgar that a liquor ban extension won't solve all the problems but I'm not convinced that the best endeavours of the Students' Association will ever be able to keep a lid on the actions of 5000 or more inebriated students or hangers-on.

It's a miracle that no-one was seriously injured or even killed as a result of the antics in Hyde St.

We're all aware of the negative nationwide publicity the university receives every time there is disorder (Undie 500, Castle St fires, toga party, Hyde St keg party come to mind). This is now reaching overseas as well, and international students who are selective about where they choose to study and their fee-paying parents are likely to be appalled by this behaviour.

This could well rub off on Otago's academic reputation as well.

I believe the Hyde St party has had its day. It was a great concept and initially just for residents, but with people coming in from as far away as Gore to Wellington it has grown far too big and uncontrollable.

This year, there were several students who vacated their flats for the weekend because they were fearful.

If there has to be a party next year, I suggest it be held in the grounds of the university or a specially designated park where students' feet are kept firmly on the ground.

Those attending could be levied to pay the true costs of any damage that occurs, as well as for the 40 police officers, ambulance and other staff required. It's not right that landlords, ratepayers and taxpayers are forced to subsidise street parties for any particular section of society.

Nor is it right that policing and medical services are so tied up with attending them that others in the community suffer, as I believe happened recently.