'It's made our faith stronger' 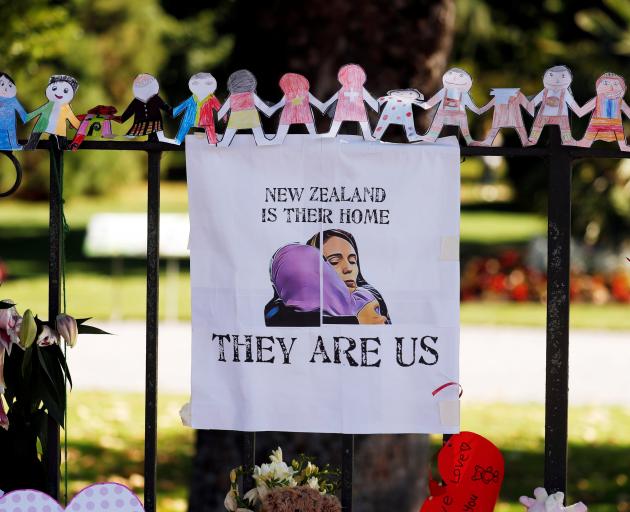 A poster hangs at a memorial site in front of Christchurch Botanic Gardens for victims of the Christchurch shooting. Photo: Reuters
Almost two weeks have passed since an evil man entered a holy place and took the lives of 50 innocent people. Instead of penning one of my usual columns, today’s article is devoted to two of my Muslim friends who were irrevocably and devastatingly affected  by the atrocities in Christchurch.

The first is Alisha Siddique, my first friend at Otago University, a greatly cherished friend, sister and daughter.

My dad received a gunshot wound to the arm, but luckily it didn't fracture any bones. Mentally and emotionally, however, we are all affected. My brother lost a very close friend, and we have all lost people whom we have known for years or since we were kids. It's been a traumatic week and we're still trying to cope as best we can.

I am so proud and glad that I voted for Jacinda. She has been a truly inspirational leader and I have nothing but respect for her. She has done what others wouldn't have been able to, which is to give Islam the chance it deserves. She has let people know that not every Muslim is a terrorist. She has shown us compassion and support and love. Jacinda has worked so hard and fast to change the gun laws. You don't see that in other countries. The whole community feels fully supported by her.

I have absolutely felt supported by my community. Before this attack I don't think many people knew how we greeted each other. Now everywhere I go people say ''As-salamu alaykum'' (which means ''peace be upon you'') to me and any other Muslims they see, which is so comforting. Strangers come up to hug me and asking if there is anything they can help with. Just showing that care and love is enough of a support. I would love for people to read about Islam and what it stands for. We are not terrorists. I wish people could see the love and care Islam has to offer. We are just like any other religion. We believe in Allah and we follow His rules.

The Muslim community in Christchurch is not very big. Everybody knows everybody. We all pray together or celebrate together. My family has lived in Christchurch for 20 years and we live right around the corner from the mosque so we knew everyone. Everyone is kind and loving and always ready to help one another out.

I ask myself every day why the shooter did what he did. I wish he knew the people he killed like I did. I sometimes wonder what would I do if I got to ever see him or talk to him. It's not fair to broadcast the trial because those who have been directly affected by this atrocity will already be going through enough without having to see it unfold on TV.

But nothing can stop us from going to a place where we feel so safe. My family, along with other Muslims in the community has been going to the mosque to pray ever since the police handed the Al-Noor Mosque back to the community. If anything, it's made our faith stronger and we are more determined to go back.

My second friend is a kind and gracious man called Mohamed Gatish, whom I met on a student exchange at Edinburgh University.

On the morning of Friday 15th March, I received the video of the Christchurch attack in a WhatsApp private message. It was first message I received that day. I opened the video and it was far more than what I expected. You can not imagine the amount of horror and anger generated inside me after I watched the video.

The fact that I saw someone walking with a machine gun into a building which I consider the house of God, and watched him kill people whom I consider brothers and sisters is very frustrating and rather terrifying.

It suddenly occurred to me if this happened in one of the most liberal and diverse countries in the world, it could happen anywhere. The United Kingdom is in many ways like New Zealand. If this happened in New Zealand, it could happen here. The thought that I could be attacked at any time by any stranger in the street started running through my mind. This was the only time in my life in Britain that I felt I am not safe; that I am not welcome here.

I hoped that everyone, especially non-Muslims, would condemn this atrocity and treat it as a terrorist attack and a crime against humanity. I have only one friend from New Zealand. I hoped she would recognise this as a terrorist attack and that she would write something about it. I really hoped that Jean and everyone else wouldn't take a mild approach towards the incident, because it appeared to me to be the start of an endless war or genocide.

The feeling of fear and anger soon vanished after Jean and everyone else showed their solidarity, sympathy, love and rejection of the terror act. I was so pleased and overwhelmed with the number of people who attended the vigil last Saturday (16/03/2019) at the central Mosque of Edinburgh. I wished I could go around and shake everyone's hand and say thank you. This attack did not even remotely change the way I look at my non-Muslim friends and it will never change it. This trouble has taught me a lot. It has taught me that love will always overcome fear, and unity will always win over division.

The main thing that matters is what we do about it. These extremists are like the weeds that grow in our gardens. If we ease and never bother ourselves by fighting them they will grow all they like, right around our shoes. We do not need to get to the stage Libya, my beloved country, and Syria have gotten into where a lot of people have lost their lives fighting the extremists.

We have to tackle extremism and racism in its early stages everywhere; in our city, in our streets, in our workplace, in our schools, and even in our homes. We can not just rely on excellent leaders like Mrs Jacinda Ardern to do this job. We have to get into action and act immediately when somebody around us is racially abused.

I want to send my love and prayers to the family and friends of the victims. To all the Kiwis: you are so lovely and I love your Haka.

There is nothing else I can add to the warm and eloquent words of my friends, other than perhaps my favourite proverb: