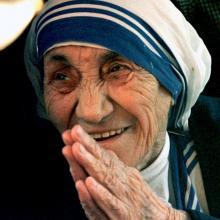 Next year  marks the 70th anniversary of the start of Mother Theresa’s Little Sisters of the Poor work among the poorest of the poor in Kolkata.

She died 49 years later, having created a worldwide movement of compassion for the poor and indeed for those who would care for the poor.  Along the way she raised a voice of support for the unborn children who would become victims of abortion and for the victims of HIV Aids.

She grew her movement to some 4000 strong women, and eventually men, and she gained enormous respect across a number of religious traditions.  In short, she began a movement to meet the need of people whom society deemed useless, and in so doing she loved them and at no small sacrifice to herself.

Few would deny that Mother Theresa’s work did not add to the peace and wellbeing of the  world.

Fewer still would deny that her work was a work of love, but how many would call her work logical?  Most of the people she worked with were near the end of their lives. Many were only hours away from death, yet still she took them in and helped them die with as much dignity as possible.  Most of them were not of or from her own faith.  Many had lived lives of poverty-induced indignity and, perhaps, evil.  But none of that mattered to her.  For this nun, known as the saint of the gutters, the very heart of the matter was that they were human and should be treated as such.

It was Christ-like, in that it was done with mercy, without partiality, putting others before her personal needs. Love does this.  It calls forth from those it touches the very best.  It raises us to be better people and inspires those around us to do the same.  Dunedin has spawned a number of logical lovers.  I think of the Rev Rutherford Waddell, preacher of the great sermon against the practice of "sweated labour" whereby wages had been lowered to below subsistence level.

He also set up a savings bank, free library and the country’s first free kindergarten. I think of James K. Baxter, perhaps one of New Zealand’s most celebrated poets and also a man who cared deeply about the poor and dispossessed.  Yet he was a man who struggled in very human ways to love others. I think of Bendix Hallenstein, the originator of the men’s clothing business named after him, still in existence today.

"Hallenstein was noted for his generosity to those in need and was an enlightened employer.  In 1880 he established a fund which provided free medicine for his employees, until the introduction of social security in 1938." (Te  Ara online encyclopedia).

He supported many initiatives to enable people employed in his and other businesses to lead better lives.  The Otago Witness commented that "The helping hand of the deceased gentleman will be sorely missed by the poor of all creeds."

There are many others, but my point is simply this — love is not a "soft" topic indulged in by the weak and the wayward.  It is logical and proactive — it is the rational alternative for a society otherwise fixated on self-interest and the success of the strong.  Such a society will always become one in which the strong survive by means of force and exploitation.  Jesus had a description for this sort of society:  He said it was a place in which the sword reigned.

Such a society becomes a  dismal place for, as he made clear, "Those who live by the sword will also die by it" (Rev.13:10).

I understand that the gaining of compassion, and empathy, is based on seeing every human being as an individual, not part of an amorphous group representing a religion or ideology.