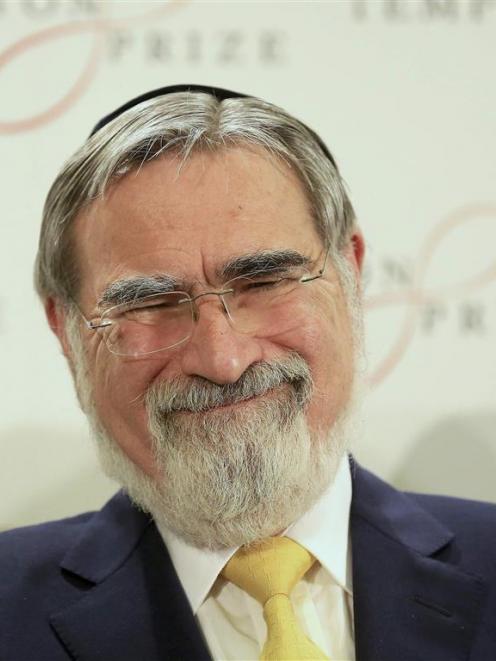 Jonathan Sacks. Photo by Reuters.
New Zealand is potentially a role model for religious diversity in the world at large, Ian Harris writes.

Now the reverse is true: in terms of religion, our society has become one of the most diverse in the world.

Resented, this diversity will exacerbate division and hostility.

Welcomed, it will help provide the social cement of trust which people in a globalising world sorely need, in a way that economic integration, currently all the rage, never could.

All it requires is acknowledging "the dignity of difference'' - which happens to be the title of an important book by the former Commonwealth Chief Rabbi, Lord Jonathan Sacks.

Religion has a vital role to play in shaping the way ahead.

Some will look at history and object that religious difference has actually fomented antagonism around the world, especially when used to reinforce the social, economic and political domination of one group over another.

Invariably, that has resulted from an abuse of power, in denial of a tenet affirmed by every major faith: Always treat others as you would want them to treat you.

Christians and Muslims have the worst record here.

Think of the Crusades, Catholic Spain's expulsion of Muslims and of Jews, the mutual bigotry of Irish Protestants and Catholics, and in today's world, Muslim intolerance of Christians in much of the Middle East, and outright persecution by extremists in Nigeria, Syria, Iraq, Pakistan.

Adherents of other faiths are not blameless.

In Myanmar, Buddhists seek to suppress Christian and Muslim minorities.

While their motivation is basically nationalistic and political, they invoke religion to cloak their prejudice in a mantle of sacred duty.

Add to that some people's Dawkinsesque intolerance of anything religious at all, and you have the makings of a witches' brew of discord.

To that there is a religious answer, and people of every faith, and even of none, are called on to contribute to it.

From a faith standpoint, Lord Sacks explains why: "Biblical monotheism is not the idea that there is one God and therefore one gateway to his presence. To the contrary, it is the idea that the unity of God is to be found in the diversity of creation.''

It is therefore essential to let go of any sense that all would be well if only everyone could be crammed into the same mould (your own, of course): "The test of faith,'' says Lord Sacks, "is whether I can make space for difference''.

In light of that, it should come as a relief that there are those who see New Zealand as potentially a role model for religious diversity in the world at large.

That was given form and focus in March through the launch at Parliament of the Religious Diversity Centre in New Zealand.

It expands on a variety of local interfaith groups, but does not replace them.

The professor of religious studies at Victoria University, Paul Morris, reminded the gathering that New Zealand had moved from being 91% Christian in the 1961 census to about 50% in 2013, while those declaring "no religion'' had risen from 5.5% to about 40%.

We now have sizeable Hindu, Buddhist, Muslim and Sikh communities, and nearly a quarter of a million members of religions other than Christian.

A 2014 report by the Pew Research Centre ranked New Zealand 19th among 232 countries and territories for religious diversity, above Australia, Belgium, France, Britain, Germany and the United States.

Most diverse is Singapore.

Prof Morris said such diversity could either threaten social cohesion or be an enormous positive resource for social harmony.

But its positive value had to be consciously developed.

Studies showed many professing ‘‘no religion'' nevertheless say they are "spiritual'' and interested in religious issues.

Also, perhaps counter-intuitively, members of religious communities are more likely to be open to people of other faiths than the "nones''.

Presumably they know the value of faith for their own identity, so can value it in others.

As Lord Sacks observes: "Those who are confident in their faith are not threatened but enlarged by the different faith of others.''

The new centre will carry out research, offer training in religious diversity, educate, give policy advice, and comment on relevant public issues.

Launching the centre, patron Helen Clark said: "The world badly needs voices of reason and tolerance and people who will work to build dialogue and respect across faiths and beliefs. I do believe that New Zealand can show the way.''