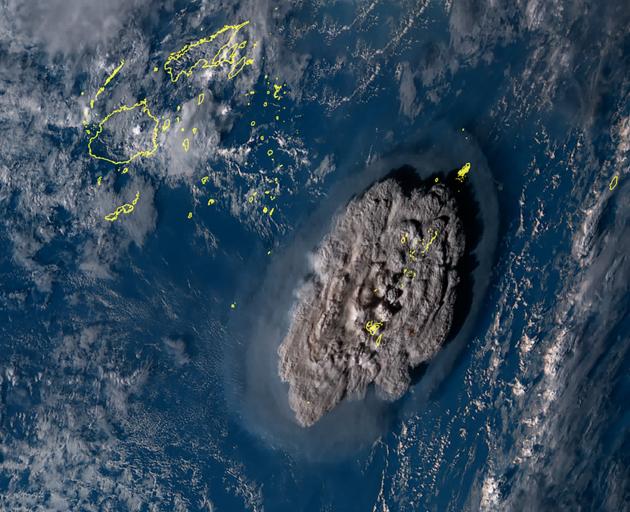 A satellite image captures the eruption of the underwater Hunga-Tonga-Hunga-Ha’apai volcano. SUPPLIED
The Tonga volcanic eruption has revealed the vulnerabilities in our global telecommunication system, Dale Dominey-Howes, professor of hazards and disaster risk sciences at the University of Sydney, writes.

In the wake of a violent volcanic eruption in Tonga, much of the communication with residents on the islands remains at a standstill. In our modern, highly  connected world, more than 95% of global data transfer occurs along fibre-optic cables that criss-cross beneath the world’s oceans.

Breakage or interruption to this critical infrastructure can have catastrophic local, regional and even global consequences. This is exactly what has happened in Tonga following Saturday’s volcano-tsunami disaster. But this isn’t the first time a natural disaster has cut off critical submarine cables, and it won’t be the last.

More than 885,000km of submarine cables have been laid around the world since 1989. These cables cluster in narrow corridors and pass between so-called critical “choke points”, which leave them vulnerable to a number of natural hazards including volcanic eruptions, underwater landslips, earthquakes and tsunamis.

Tonga was only connected to the global submarine telecommunication network in the past decade. Its islands have been heavily reliant on this system as it is more stable than other technologies such as satellite and fixed infrastructure.

The situation in Tonga right now is still fluid, and certain details have yet to be confirmed — but it seems one or more volcanic processes (such as the tsunami, submarine landslip or other underwater currents) have snapped the 872km fibre-optic cable connecting Tonga to the rest of the world. The cable system was not switched off or disconnected by the authorities.

This has had a massive impact. Tongans living in Australia and New Zealand can’t contact their loved ones to check on them. It has also made it difficult for Tongan government officials and emergency services to communicate with each other, and for local communities to determine aid and recovery needs.

Telecommunications are down, as are regular internet functions — and outages keep disrupting online services, making things worse. Tonga is particularly vulnerable to this type of disruption, as there is only one cable connecting the capital, Nuku’alofa, to Fiji, which is more than 800km away. No interisland cables exist.

The events in Tonga once again highlight how fragile the global undersea cable network is and how quickly it can go offline. In 2009, I co-authored a study detailing the vulnerabilities of the submarine telecommunications network to a variety of natural hazard processes. And nothing has changed since then.

Cables are laid over the shortest (that means cheapest) distance between two points on Earth’s surface. They also have to be laid along particular geographic locations that allow easy placement, which is why many cables are clustered in choke points.

Some good examples of choke points include the Hawaiian islands, the Suez Canal, Guam and the Sunda Strait in Indonesia. Inconveniently, these are also locations where major natural hazards tend to occur.

It can take days to weeks (or even longer) to repair broken cables, depending on the cable’s depth and how easily accessible it is. At times of crisis, such outages make it much harder for governments, emergency services and charities to engage in recovery efforts.

Many of these undersea cables pass close to or directly over active volcanoes, regions impacted by tropical cyclones and/or active earthquake zones.

In many ways, Australia is also very vulnerable (as is New Zealand and the rest of the world), since we are connected to the global cable network by a very small number of connection points, from just Sydney and Perth.

How do we manage risk?

Given the vulnerability of the network, the first step to mitigating risk is to undertake research to quantify and evaluate the actual risk to submarine cables in particular places on the ocean floors and to different types of natural hazards. For example, tropical cyclones (hurricanes/typhoons) occur regularly, but other disasters, such as earthquakes and volcanic eruptions, happen less often.

Currently, there is little publicly available data on the risk to the global submarine cable network. Once we know which cables are vulnerable, and to what sorts of hazards, we can then develop plans to reduce risk.

At the same time, governments and the telecommunication companies should find ways to diversify the way we communicate, such as by using more satellite-based systems and other technologies.