MMP can be modified to suit the needs of electors 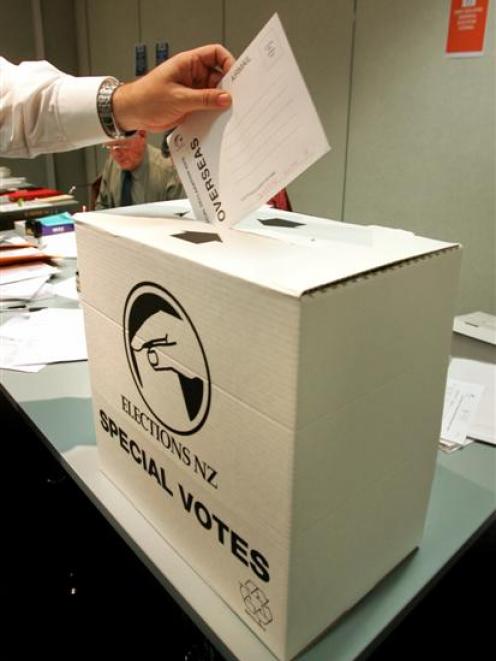 One major policy issue, the future of our democracy, has been barely discussed during the election campaign.

Yet National, odds on to lead the next government, has promised a referendum on MMP by 2011 on the following terms: "The referendum will give people a choice between retaining MMP without any further consideration or having a further vote on MMP alongside another electoral system or systems."

"Without any further consideration" means that we will be given no chance to discuss the kind of MMP we now have, or could have in the future.

No chance to debate whether we should change or improve our New Zealand version.

Because, unlike the antique First Past the Post (FPP) system, MMP can be modified to suit the needs of the electors.

And it is those needs that are paramount.

You don't like the fact you can't change the party lists? You think the threshold is too high or too low at 5% of the vote? These and other matters can be debated and fixed.

As well as those hangovers from FPP days - prime ministers being able, regally, to call elections when they feel like it, and separate Maori electorates - that distort and compromise the working of proportional representation.

There has been no change or proper examination of our system of MMP since it was introduced in 1996.

It is time not to have a referendum on what we have, but a debate on how to make it better.

Because there is not just one kind of MMP.

In MMP's electoral home, Germany, there is more than one version in use.

The electoral system belongs to us, not the politicians, and we should be properly consulted on what we want before any kind of referendum is held. The National Party's "without any further consideration" suggests they have no intention of doing that.

Why? Leading business supporters of the National Party, who opposed MMP from the beginning, have never rested in trying to persuade the party to bring about a referendum that will get rid of it.

Their motives? To return New Zealand to a system whereby the country will be always ruled by one major party, usually National.

They persuaded Don Brash to include an MMP referendum in his 2005 election manifesto, and now John Key.

Key has said that he would be surprised if New Zealand went back to First Past the Post and that "some proportionality makes sense".

This is code for the Supplementary Member (SM) System which has been touted by National Party leaders as far back as Jim Bolger.

This is what might be politely called Clayton's MMP - MMP when you're not having it.

Only the other 20 would be allocated according to a party's actual vote.

This would mean that a minor party would receive only one seat for 5% of the vote, not six, and would need 10% to get a second.

This is token proportional representation.

It would effectively return us to the bad old days of handing unbridled power to one major party without checks and balances.

Ex-pat New Zealand Professor Jeremy Waldron of the New York University School of Law recently made a scathing analysis of New Zealand's corrupted parliamentary system which has seen the evolution of procedures for fast-tracking such disastrous legislation as the Electoral Finance Act.

We have the only Parliament in the world that requires no quorum in the house for the passage of legislation.

This means that the chamber can be empty except for the speaker, the minister sponsoring a Bill, and a whip to call out the numbers when they are needed for a vote.

Our parliamentary system is in a shambles and "without any further consideration" of that, the National Party would like to manoeuvre us out of MMP, the only check we voters have on a government's unbridled power.

What we need is not an ill-defined, ad hoc referendum but a new Royal Commission on the Electoral System, a generation after the last, to enable a considered examination of all aspects of the voting system, the electoral cycle, electoral financing, the Maori seats etc . . . so that all sectors of the community can have input and influence in bringing about much-needed reform.

- Dr Philip Temple is a Dunedin author and electoral commentator.