More things to fear out there than North Korea 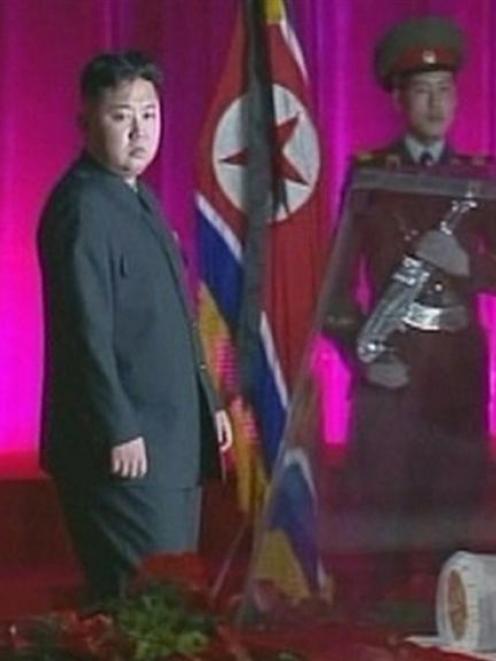 New North Korean ruler Kim Jong-un (centre) pays his respects to his father and former leader Kim Jong-il (right) who is lying in state at the Kumsusan Memorial Palace in Pyongyang in this still picture taken from video footage aired by KRT (Korean Central TV of the North) on Tuesday. Photo by Reuters.
Dr Fouchier is a decent man who means well. Yet what he has made is far more dangerous than North Korea's bombs.

Western intelligence agencies have been warning for years about the terrible consequences that would ensue if Iran were to get nuclear weapons. Better bomb the place before they do.

But North Korea already has nuclear weapons, and now they are falling into the hands of a young man whose main qualification for office is that he is less weird than his half-brother, who was caught trying to sneak into Japan on a false passport to visit Disneyland Tokyo.

The North Korean story has got a lot of play in the international media in the last few days, partly because Kim Jong-un is such an obvious misfit for the job of "Great Successor".

What gives the story legs, however, is North Korea's nuclear weapons (both of them), its huge army (fifth-biggest in the world), and its insanely belligerent rhetoric.

A mere two nuclear weapons, so primitive and clumsy that they are probably only deliverable by truck, are not useable for attack.

Their only sensible purpose is to deter an attack, and North Korea's are not very credible even in that role. All very well, the intelligence analysts say, but what if the people who control the weapons are crazy?

Well, Kim Il-sung's understanding of the rest of the world was severely limited, and so was Kim Jong-il's. Kim Jong-un may be no better. But for 60 years now North Korea has not attacked anybody. They can't be all that crazy.

So we have, on the one hand, these not very convincing official claims, loyally repeated by Western media, that the latest dynastic succession in North Korea might "destabilise" north-eastern Asia, even lead to a local nuclear war. And on the other hand, we have this modest biolab in the Netherlands that has fabricated an ultralethal variant of the "bird flu" virus and plans to publish its results.

The Erasmus Medical Centre in Rotterdam is a long way from the secret underground lairs where James Bond-style villains hatched their evil plans, and Dr Ron Fouchier, the lead researcher in the H5N1 experiment, does not look a bit like Dr No. In fact, Dr Fouchier is a decent man who means well.

Yet what he has made is far more dangerous than North Korea's bombs.

When the H5N1 virus first appeared in 1996, there was a global panic, for it killed about 60% of the people it infected.

The panic subsided when it turned out that the virus could only be spread by very close physical contact between people; you were most unlikely to catch it by sitting next to someone on a bus.

It would have been very different if the virus had been as infectious as the common cold, which is usually spread by tiny water droplets coughed out by the infected person.

That's the question that Dr Fouchier set out to answer. He caused deliberate mutations in the virus and then repeatedly passed it manually from one lab animal to another - and quite soon, he had what he was looking for.

"In the laboratory, it was possible to change H5N1 into an aerosol-transmissible virus that can easily be rapidly spread through the air," Dr Fouchier said in a statement on the university's website.

"This process can also take place in a natural setting. We know which mutation to look for in the case of an outbreak, and we can then stop the outbreak before it is too late."

That was the point of the experiment, of course. The research, funded by the US National Institutes of Health, was intended to discover just how likely such a mutation of the virus was.

Nobody seemed to mind the fact that this involved creating exactly that virus - and, if normal scientific practice is followed, publishing the full genetic sequence of the mutated virus in a scientific journal.

Dr Fouchier's scientific paper has already been submitted for publication, but the US Government's National Science Advisory Board for Biosecurity still has the power to order key parts of the paper to be omitted, so that terrorists cannot use the information to create their own global quick-killer virus.

But the cat is already out of the bag: there are probably several terrorist organisations, and dozens of governments, that can duplicate Dr Fouchier's research now that they know how he did it.

As former arms control researcher Mark Wheelis, of the University of California, Davis, said: "Blocking publication may provide some small increment of safety, but it will be very modest compared to the benefits of not doing the work in the first place."

There are more frightening things in the world than wonky North Korean dictators.