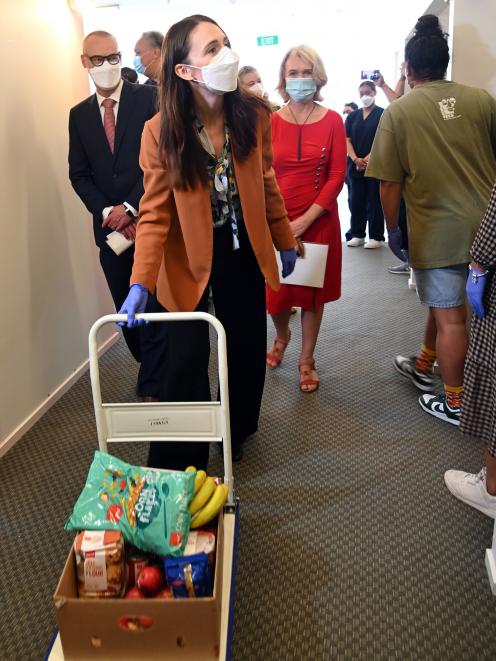 Ingrid Leary watches Prime Minister Jacinda Ardern pack a food parcel at Te Kaika a fortnight ago. PHOTO: CRAIG BAXTER
Whatever you might say about Covid-19, and I’m sure you could say plenty, at least it does not discriminate.

Anyone can fall foul of the virus, be they humble or high, as four of our southern MPs can testify.

Taieri Labour MP Ingrid Leary, and National MPs Joseph Mooney (Southland), Jacqui Dean (Waitaki) and Penny Simmonds (Invercargill) have all contracted the virus, encapsulating neatly just how extensively it has spread across Otago and Southland since this outbreak’s first case was detected here six weeks ago.

For Ms Leary, Covid came a fortnight ago and she, thankfully, was not positive when Prime Minister Jacinda Ardern came to visit her electorate that week.

"We had a household member who tested positive so it was fairly inevitable," she said.

An itchy throat, reminiscent of the tonsillitis which afflicts most of her family, was Ms Leary’s first warning sign, but she was able to work most of the week following her positive diagnosis.

"On Friday, I did not feel good at all and slept the whole entire day but by Saturday I started to feel I was coming right: I only had down time of a day or so, but that tine was quite intense.

"For vulnerable seniors, I would not wish it upon them at all."

Mr Mooney’s symptoms initially felt like a severe cold or a mild flu but escalated to cause him a very unpleasant night or two: "It was nothing to write home about, but it didn’t really interfere with my work."

Mrs Dean was badly affected by Covid and while now clear still suffers some of the side-effects.

"I was absolutely flattened by it ... it came with a general, quite debilitating tiredness unlike anything I have ever been through," she said.

"I’m still battling fatigue and I think the key to this is that you should probably listen to your body and just rest."

Ms Simmonds said Covid-19 was not the worst virus she had had, "but it was certainly up there".

While it did not prevent her working, it was "very unpleasant" and left her feeling much more tired than usual.

"It took more than a week to come right with it ... it makes you aware of the vulnerable people in our community and how we should do everything to avoid them getting it."

All four MPs were fully vaccinated, as all MPs have to be to attend the House, and each felt that had they not been so, their far from pleasant Covid experiences could have been much worse.

Each also was acutely aware that many of their constituents are also suffering, either directly from the pandemic illness or from the associated economic hardships.

Ms Leary said Taieri, which has one of the highest proportion of elderly in any electorate, was the kind of place where all care needed to be taken to avoid the spread of Covid-19.

"I think people are coping well. Because of the nature of the electorate there is a caution and a conservatism in the community around illness, which means people are taking really good care."

Mr Mooney’s electorate is caught betwixt and between by Covid-19.

It was, once again, the first southern region to be affected by the pandemic, and it still has more than 1600 cases ... but it is also the part of New Zealand keenest to see health restrictions ease and overseas tourists return to these shores.

"It is a bit of a dichotomy.

"But the Government has recognised it is time to open the borders again, that is a good thing ... it has been a really challenging time for businesses unable to open and for people who have not been able to go to work," Mr Mooney said.

Mrs Dean’s Waitaki electorate has a range of pandemic stories to tell: the experience in Wanaka, Central Otago and in Oamaru and its surrounds may well be very different, even if the disease is the same.

"I haven’t been out much, I am still being cautious about getting out and about, but even in the limited contact I’m having it seems to be all-prevailing," she said.

"How widespread it is might have to wait until everyone re-emerges and says ‘Yes, I had it’."

Right now, Ms Simmonds’ Invercargill electorate is the eye of the South’s Covid storm: add the metropolitan Invercargill case numbers to those of rural Southland and the daily case numbers are higher than Dunedin’s.

"It is well and truly going through here now. Thankfully, we haven’t had a lot of deaths from it and we are all hoping that continues."

Ever a parochial local, Ms Simmonds is quick to point out that the glorious early autumn weather down south had probably reduced transmission a little, as people were able to get outside and to keep windows open for ventilation.

"Not being in the depths of winter is certainly helpful but it’s certainly noticeable in town that people are not out and about," she said.

"Retailers and hospitality venues are doing it tough. We are all hoping that we are near the peak."

One inspiring side of the pandemic had been watching the health workforce and welfare organisations swing into action to do the jobs they had trained and planned for, Ms Simmonds said.

"We have great community organisations and they are doing great work. They are all rallying around when people are getting unwell.

"People are well vaccinated, we have to hope that gets us through it."