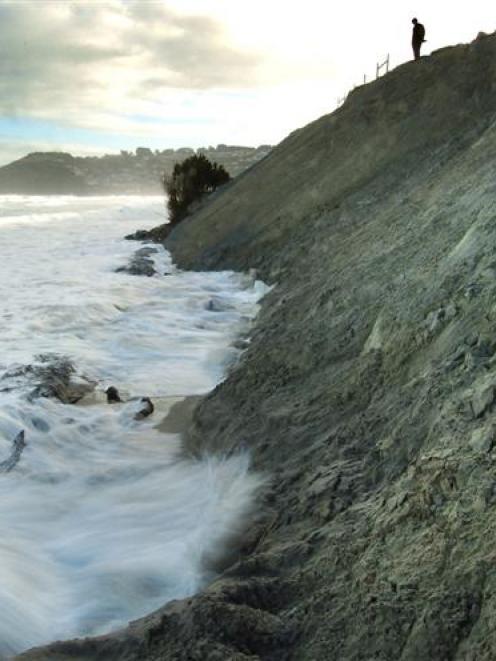 Waves begin eating away at recently dumped sand at Middle beach as the tide rises last month. Photo by Gerard O'Brien.
The initial response to coastal erosion is often the construction of a sea wall, but Phillip Cole argues that will not do the job at Middle Beach.

Pictures and stories last month serve as a timely reminder to those who will decide the fate of Middle Beach when the project team discusses the initial results from the year-long gathering of data in September.

In an Otago Daily Times front-page report six months ago, the Dunedin City Council reiterated that it would be looking at a range of "hard" and "soft" options for Middle Beach and that it would not be ruling anything in or out in coming to a solution.

The different types of solutions will have their own sets of unique problems and financial costs, a fact acknowledged by the council.

The time scale of several years before any construction can take place, however, is the most telling feature of all.

So where does that leave the Middle Beach problem? The stadium costs and other major project spends will leave the council with very little money for this project.

The council has stated that $400,000 over the next three years has been set aside to deal with the problems (already depleted by at least $60,000 due to the recent events) but, rather alarmingly, no money has been set aside for a long-term management plan, or indeed for the four years until "any construction can take place".

By default, then, the council may have to consider the option that wasn't mentioned in either story but was raised at the submissions hearing - that of a "managed retreat".

Often, the initial response to shoreline erosion is to build a sea wall.

A sea wall will not solve the problem at Middle Beach.

Sea walls force waves back to the ocean.

These waves take the sand in front of the sea wall and deposit it far away from land.

The water in front of the sea wall gets deeper and makes for bigger waves next to the shoreline, so you always have to build larger sea walls.

The sea will always win this battle, because the force of water will always be stronger than any sea wall.

Adopting a managed retreat policy at Middle Beach will be successful if it begins at a grassroots level.

An open and honest approach will have a successful outcome, as it will involve all major players in the planning process and address their concerns.

Although the process will take time, a consensus can be reached that will enable a managed retreat to be the best alternative to solving the long-term problems of Middle Beach.

Indeed, this could take place in the "several years" before any construction takes place, as quoted in the newspaper report.

One could argue that consultation at a local level could have already begun since the submission hearings in April 2008 to hear and consider the views of the people that will ultimately be affected by whatever action the council decides upon.

A golden opportunity presents itself to the council here.

An integrated planning strategy can be developed where people affected by the erosion can be relocated into new sustainable housing developments where they would no longer be affected by the current sewage, drainage and flooding problems that will continually arise whenever there is a downpour in South Dunedin.

Property owners who would be affected could have compensation paid at market rates for their properties, or "swap" their current homes for new ones built to replace them.

Managed retreat, in the case of Middle Beach, is an important soft engineering coastal defence technique which aims to achieve sustainable flood defence by creating new defences further inland and allowing the land behind the existing sand dunes to be flooded by the incoming tide.

The existing coastal defence, in this case the sand dunes, would be breached, allowing the land to be tidally inundated and colonised over time by salt marsh vegetation.

When established, the vegetation disperses wave energy during storms, reduces erosion rates and provides an important habitat for coastal flora and fauna.

A new embankment is usually constructed beforehand on the landward side of the site to reduce the risk of flooding.

It is widely recognised that managed retreat of a shoreline can reduce the costs of coastal defence while offering numerous environmental benefits.

As the shore erodes, buildings and other infrastructure are either demolished or relocated inland.

In many situations attempting to stop erosion through structural or non-structural solutions is a losing battle.

Shoreline protection efforts and/or their repeated maintenance would be too costly and ultimately ineffective at preventing further erosion.

The advantage of a managed retreat system is that it is usually less expensive than costly structural stabilisation projects that may only be a temporary solution, especially in highly erosive areas such as Middle Beach.

There are no direct costs, aside from the removal of any defences already in place, and maintenance costs are very low.

The inter-tidal region is able to dissipate wave energy and protect property and land, while supporting a wide variety of plants, invertebrates, molluscs, birds and fish.

Sediment flow is also restored to its natural state; beaches can be naturally replenished due to erosion of the coast, providing protection and the balance of the coastline returns.

Yes, this method can be politically difficult to implement, particularly where significant development has already occurred.

It may cause shorefront property values to fall.

With an in-built political and institutional preference for "hard" engineering schemes this solution will face a lot of opposition.

But what came first - the shoreline or the buildings? The future, as we all know, is unknown.

Scientists forecast sea level rises, but there are unknowns that could rapidly change their forecasts.

Therefore, the traditional approach to design cannot be applied to Middle Beach, simply because historical data is less applicable.

A change in outlook is required by how people plan for such challenges, how the community accepts the change, and crucially, how our council involves the communities to adapt to change.

Rising sea levels do not come into the equation, as most of South Dunedin is currently below the present sea level.

The council has an opportunity here to be both forward-looking and bold in its search for a solution to the problem.

History has shown that man cannot control nature, especially where sea action is concerned and the council should take this on board when looking for a solution.

• Phillip Cole is a resident of Dunedin and co-chairman of Sustainable Dunedin.