Never mind being PC, the culprits must pay 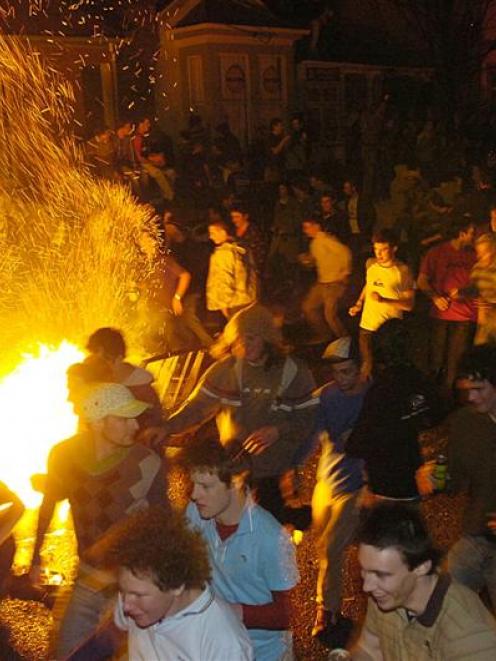 Students party in the North Dunedin student quarter. Photo by Peter McIntosh.
Who in New Zealand does not know where Castle St is?

My bet is that 95% of this country's population will say Dunedin.

Why? "Oh, because of the student riots."

What an indictment on our City's administrators.

It all dates back to the 1990 University Easter Sports Tournament when mayhem broke out in Castle St with Otago and visiting students creating havoc by vandalising properties, lighting fires and abusing police.

National media made a meal of the disgraceful behaviour that took place over a number of hours.

The University of Otago was devastated by the unwanted publicity.

Was anyone charged and convicted? Probably not.

There was talk about expelling the culprits - all talk, no action.

Firefighters and police clashing with students, if not in Castle St, in other parts of the inner Campus.

We are told police lay charges against the odd culprit and they then appear before the court.

Too often, in my view, the result is: "Discharged without conviction".

The university, in conjunction with the Dunedin City Council, has been examining ways of curbing this unpalatable behaviour that is sending a damaging message to the country that Dunedin is Otago University's Party City.

Along with many others who have interests in North Dunedin, I have been part of the discussions.

So many things have been talked about in the pursuit of better student behaviour when alcohol is involved, but with limited success.

Has too great a politically correct approach been taken; and do the culprits know the punishment is not something to be worried about? Has any student been expelled for serious breaches of the law? If not, why not? Fast forward to 2007: the Undie 500.

About 60 people charged with a variety of criminal offences.

Did any university expulsions follow? Were rules not in place to allow expulsions? If not, why not?As a result of those riots, the university introduced a Code of Conduct, which one would think would be a step in the right direction.

Opposition to the code came from the OUSA, which said it would impinge on students' rights and it heavily criticised this, and the introduction of the Campus Watch team.

One must remind the OUSA that about 75% of course costs and the interest on the $2 billion student loans are paid for by the New Zealand taxpayers.

Those students whose parents do not break a certain income threshold receive a living allowance under the student allowance scheme. They should all consider themselves privileged.

I attended a workshop recently to discuss the benefits and disadvantages of an alcohol ban in public places in North Dunedin, hosted by Public Health South.

I believe the findings are to be presented to the Dunedin City Council.

The title for the workshop: "Health Impact Assessment".

This is PC personified; "Behaviour Impact Assessment" would have been more apt.

Were the organisers not reminded of the 1990 Easter Sports Tournament riots, a decade and a-half of fires with police and firefighters being abused by drunken students, wilful vandalism, and of litter, all with associated costs paid by the taxpayers and ratepayers?

Add this to the 2007 and 2008 Undie 500 riots, and the question has to be asked: have these culprits been punished for their actions - which in many cases amount to criminal behaviour? (I hasten to add they represent a small minority of the 20,000-plus student body.) I suggested at the workshop the culprits if found guilty and convicted should be expelled from Otago University.

The reaction was "how barbaric".

My comments were not recorded.

The group felt "they would be ruined for life", the students should be given a second chance.

Regarding the debate over banning the consumption of liquor in public places in North Dunedin, it was agreed it may be advantageous if implemented.

It would allow police greater power to exert authority, but to ban it only in North Dunedin could be seen as discrimination against students.

They may feel offended.

To be seen to be fair, the ban would have to include all Dunedin.

What nonsense! The problem is in North Dunedin and we are paying the bills.

The workshop suggested better lighting, plastic containers instead of glass, the refunding of bottles when returned empty, stopping the sale of cheap liquor at supermarkets, more rubbish bins - mainly all the ideas that have been discussed for the past 15 years and which, in themselves, are acceptable.

Then there was the question of who was to blame for the unacceptable behaviour: the landlords for supplying sub-standard accommodation, the DCC for not collecting the rubbish at the right times of the day or week, the police for over-reacting to the drunken behaviour? This merry-go-round blamed everyone except the culprits.

Why not ask the hard questions? Who is paying for the large police presence at these unruly gatherings? We, as taxpayers.

Who is paying to clean up the aftermath litter? We, as ratepayers.

Who is damaging the reputation of Otago University and our City? Who are the culprits? Mainly alcohol-fuelled students.

The university must have rules in place to expel them.

Surely this is long enough.

If the findings of this PC "Human Impact Assessment" alone are adopted and the hard-line approach - expulsion - isn't taken, this criminal behaviour will continue year after year to the detriment of the university and this City.

The university, when promoting itself, must surely have egg on its face through its insufficient action to remedy such a serious problem.