'News' already in the public domain 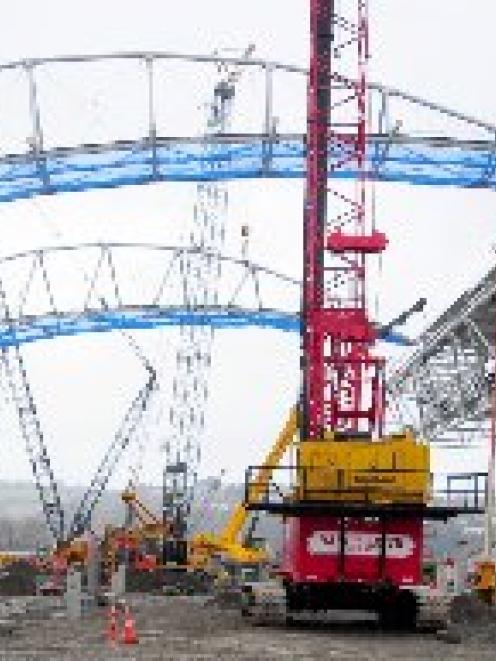 A second roof truss is lifted into place at the Forsyth Barr Stadium earlier this month. Photo by Craig Baxter.
A recent front page article in the Otago Daily Times highlighted items not included in the Forsyth Barr Stadium's main construction contract. Malcolm Farry points out this information was already in the public domain and suggests the article carried unfortunate implications.

Over the past four years, I have become accustomed to being called at home by members of the public wanting a "chat" and to share their contrasting views on the merits of the Forsyth Barr Stadium project.

However, these exchanges reached a new level of intensity following the Otago Daily Time's article on August 12 under the headline "Stadium extras to cost in millions".

The increase in the number of calls, the first of which arrived at 7.01am, seemed to have been caused by a mood of uncertainty stimulated by treatment as "news" of information already in the public domain.

The calls continue to this day.

Most of this "news" had been public knowledge for some years.

It had already been examined and dealt with on a number of occasions by the Carisbrook Stadium Charitable Trust (CST), Dunedin City Council, the public and, indeed, the ODT.

At first glance, the implication of the story seemed to be that there had been an increase of many millions.

While careful reading of the article provided the answers, many readers might have been rightly disturbed, vindicated in some cases, by the sensational import of the headline which might have suggested to the faint-hearted a new blowout of costs.

It wasn't until paragraph seven, below the fold, that it was revealed that this was, in fact, information which had first been publicly disclosed by CST in 2008, and that such matters as kitchen fitouts, turnstiles, scoreboards and replay screens were provided for outside the guaranteed maximum price (GMP) contract.

So, for the record, again, let me deal with the items raised by the ODT as "funding hurdles" one by one.

Kitchen fitout: In 2008, Davis Langdon peer-reviewed the CST proposal and identified a number of areas that had not been included in the budgeted price.

The CST did not disagree with them and in actual fact confirmed that no allowance had been made for the fitout of the kitchen area in our contract price.

We further advised that it was acceptable business practice for the fitout to be carried out as the responsibility of the business contracted to provide the food and beverage in the stadium.

Our investigations indicated that the catering fitout would be in the vicinity of $1.8 million-$2 million and confirmed that there was no need for that funding to be provided within the GMP as it was coming from the business involved.

Broadcasting facilities: This, too, was highlighted as a funding hurdle but within the body of the August 12 article it stated that broadcasting requirements would not need any additional outlay as the base fitting-out of the stadium met broadcasters' requirements.

Was it then accurate, or fair, to list that as a stadium funding hurdle?

Electronic turnstiles: We had publicly stated back in 2008 that the equipment required for admission to the stadium would be provided by the business contracted to be the ticketing agent.

CST investigations indicated that the successful contractor could properly be asked to provide the fitout equipment for them to perform their contract and that would be part of the contractual agreement.

Hence, the funding for this area was excluded from the GMP contract.

Whether this was to be in the form of turnstiles or other more advanced electronic technology had yet to be decided but the same applies no matter the product being provided.

Scoreboards and replay screens: The CST stated in 2008 this was a matter that would be dealt with through a combination of factors: sponsorship; advertising; leasing; and operating expenses.

Our consultants publicly reported that this was an acceptable approach that would meet the requirements of the contract price as well as the operational costs of the stadium and hence this was excluded from the GMP.

Artificial turf systems: This, too, was specifically excluded from the GMP and once again this was in the public domain.

The Dunedin City Council at that time made a decision that if there were sufficient savings within the GMP of approximately $1 million, then the GrassMaster system would be purchased and those savings would be utilised for turf reinforcement.

CST consultants at the time advised that there was no need for the addition of that particular product, but DVML has considered that this is a requirement that they want to have in place.

Hence the city council decision will be implemented if that funding saving is made or, alternatively, DVML may choose to raise additional funds from another source to meet their particular requirements.

Suggestions were made regarding the impact the stadium project might have on smaller welfare organisations already struggling to secure funds.

Dunedin is a relatively small city with a limited amount of funding available for good works I know, as I work for some of them too.

Fortunately, however, organisations financially supporting the stadium project have indicated that their donation will not jeopardise the funds available for other worthy causes.

The Otago Community Trust, for example, publicly stated that their support had been so arranged that it would not impact on its funding programme.

To summarise, therefore, the GMP remained in place.

The costs outlined in the August 12 article had been addressed by the CST in 2008 both before and since.

There was nothing new in the article and the headline was most unfortunate, doing a disservice to the Otago Daily Times, the CST, the city council and the ratepayers.

The New Zealand Herald picked up the article and had a major headline in the paper of August 12, "Stadium built without basics" - nothing could be further from the truth.

This will be a facility of which everyone will be proud.

Every suggestion that the CST is being anything but straight and honest in its pursuit of completing this wonderful facility makes it more difficult for the trust to achieve the objective that everybody wants - completion on time, on budget and fit for purpose.

The eyes of New Zealand, and indeed the rugby and entertainment venue world, are on us.

For the sake of our reputation, we must all be focused on getting the job done in a manner that leaves no-one in any doubt about our ability to deliver.

I accept there will still be those who are opposed to this project but even they cannot believe that we are going to stop now and I cannot stress too strongly how important confidence is.

I have been made aware that recent articles in the ODT indicating that there were alleged problems with completion date, while totally inaccurate, have dented the confidence of parties, including, importantly, personnel on site, working with great commitment to ensure we have a facility to be proud of.

There is now only one year to go.

Maybe this will be our most difficult year.

The rest of the country is of the view that southern New Zealand - those of us south of the Waitaki River - have shown, both at home and abroad, how a bit of good old southern can do can deliver.

It's time to embrace the vision, to show everyone what we in Dunedin and Otago can achieve when we put our minds to it.

Malcolm Farry is chairman of the Carisbrook Stadium Charitable Trust.