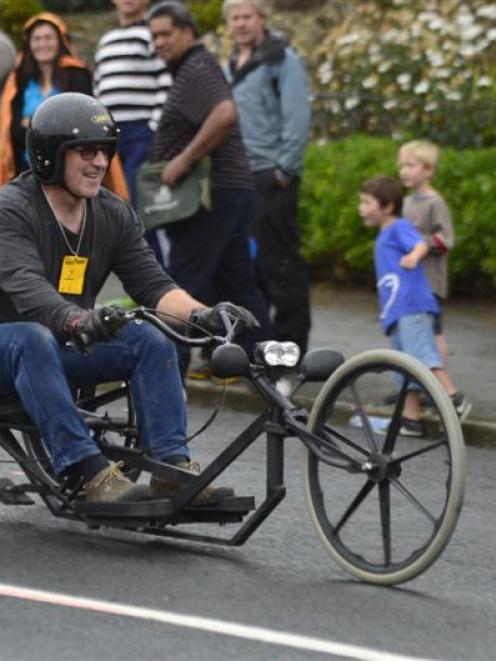 Peter King (left) scoots away in Saturday's trolley derby in Dunedin. Photo by Peter McIntosh.
Most Dunedin sports lovers knew our bafflingly fine summer would end when the recent cricket test began. They prayed until their wrists bled, but to no avail.

It rained for this one, too, but the bulk of last Sunday afternoon's racing was done before the rain came. The crowd was entrenched by then; that they would be drenched soon after was neither here nor there. At a real top-drawer trolley derby, one never feels the rain.

Unlike Formula One, there was no changing of tyres for the conditions. Trolley crews travel light. One disconsolate child trudged back to the start after a practice run and announced one of his wheels had lost a nut, he would have to go home. There are no spare nuts at the Trolley Derby. 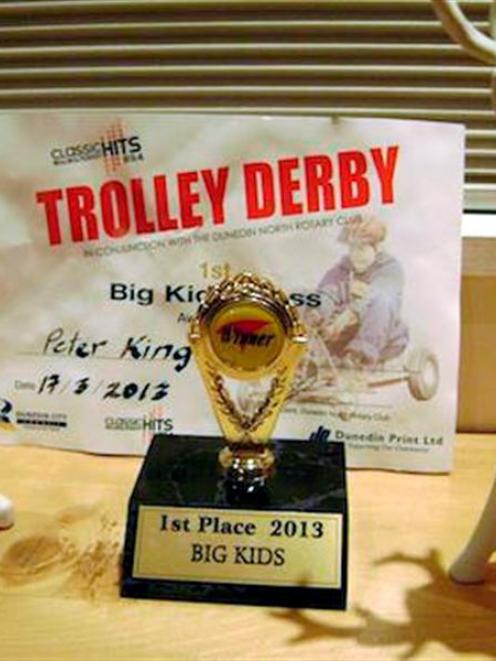 His trophy for winning the open section. Photo supplied.
But there are a few nutters, no question about that. Trolley design brings out the nutter in many fathers, and some of the wild-eyed expressions on the faces of the Zoomers (aged 5 to 8) as they thundered towards the finishing line suggested they may well become nutters when they grow up, unless their dads can steer them towards something safer, like quilting.

Not that there were many accidents, though one boy deliberately drove off the course halfway down the hill and tearfully exclaimed - ''I don't want to do it, it's too fast!''

I was there to see my friend Peter King in the open (Big Kids) race. Peter builds extraordinary sets out of demo yard detritus and stuff that's just been lying around for the Fortune Theatre.

He feasts on the challenge of meagre materials, in fact it is conventionally believed that had Peter lived in earlier times, he would have made a lot more out of those loaves and fishes than that other guy did. In recent derbies, Peter has been highly respected for his designs, but rarely seen on the winner's podium spraying beauty queens with bubbly. He went into last Sunday having only won once.

We chatted in the pits. He showed me over this year's model, a three-wheeler assembled from ''a stair-treader, half a bicycle and some steel''. Earlier models have been more elaborate. This one was sleek and stripped down to race-day basics. Peter looked relaxed on the eve of one of the city's most prestigious sporting events, but he wore a thin smile of menace.

The age-group events - Zoomers, Sprinters, Rockets and Mad Max - were enormous fun, especially a chunky little fella in red - used-car salesmen must be right when they say red goes faster - whose race padding gave him the body of a miniature Piri Weepu. And he drove like Fangio, beating everyone, and twirling his car into oncoming traffic at the end without a trace of fear.

The rain had set in solidly by the time of the open final. My man Peter had been very convincing in the heats - he won clearly and he won well. There was none of the embarrassment of a previous year when he went over the finishing line with no brakes and was actually reaching his fastest speed for the day when he hit the safety barrier. Without the barrier, they would have fished him from the harbour.

It was never in doubt. Peter was grinning from the gun, unlike the majority of the models at the iD Fashion Show two days before, who were stony-faced and almost sad. Why?

The iD Fashion Show was magnificent, I loved every second, especially the VIP room, but why don't models smile? But yes, Peter King conquered the mountain that was Manor Pl, his words.

There were no garish sponsors' stickers on his machine as in Formula One. This was a victory hewn from sweat, tears, an oily rag and blood. It was the perfect marriage of probably the two most significant movies of the past 54 years - Ben Hur (1959) and Easy Rider (1969). I was glad I was there.