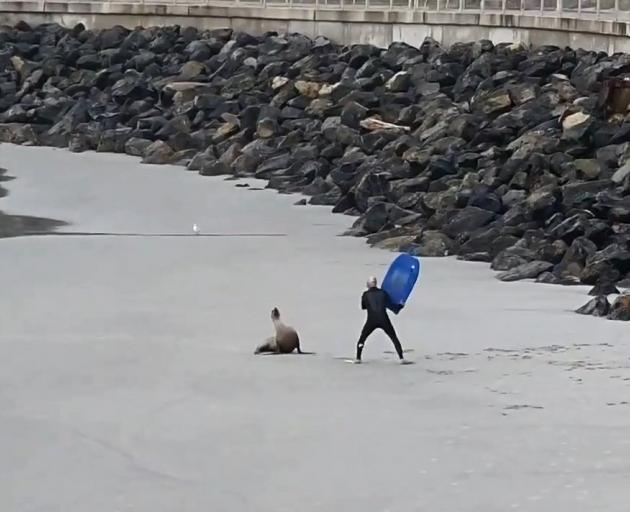 As a funster sea lion, I enjoy a New Year beach holiday as much as the next surfer.

I do like St Clair in January. The sand is warm for sunbaking, and we surf some good right-handers that run from the swimming pool. The leftovers from the Long Dog Cafe are tasty, particularly when wrapped in the Saturday edition of your excellent ODT.

Last week the swell was low, so I brought in my grommet niece for newbie lessons. Mid-class, a bloke in a wetsuit began vigorously waving his bodyboard at her.

My niece thought he was offering to lend it and so, delighted, she followed him up the beach. To our dismay this was captured on video, and she was made to look like some hoodlum sea lion attacking beachgoers.

What can be done?

Hmnn. But were you swimming between the flags?

I’m not sure I’m normal. Does Dunedin Hospital’s psychology department have a normality clinic where I can go and get myself checked?

Don’t trouble the shrinks during their holiday season. Meanwhile, accept the obvious — normal, you’re not.

I am a hermit who lives in a cave on a remote island in Scotland’s Outer Hebrides. Until recently this allowed one to avoid one’s doomed fellow creatures. Unfortunately, a TV pest (Sir David Somebody) has discovered a rare pink-crested shag nesting here, and a plague of greenie pilgrims now seem intent on infringing my right to loneliness.

Recently, the remains of a small trawler washed up on my best rock. Its wreckage contained a year-old copy of The Scotsman which said there’d been a world plague (about time!) from which New Zealand had been spared because it became a “hermit kingdom”.

What a good idea! Well done!

Please inform me — does your hermit kingdom have spare caves, and are their vacancies for immigrant hermits? If so, I’d be prepared to serve a probationary period as, say, a lighthouse keeper, until receiving my full hermit ticket. I have attached a stamped and addressed airmail envelope and plead for a prompt reply. Could you ensure my request reaches your Hermit King?

Dear Wyff. I shall pass on your request, but I’m sorry to tell you our lighthouses are now automated, and the waiting list for caves has spiraled out of control. Our Queen, Jacinda the Kind, has promised an inquiry.

I’m alarmed by the rampant growth of our Wellington bureaucracy. It is breeding at a speed which would do credit to the finest stud rabbit.

My worry is that as they grow bigger, these unelected bureaucracies don’t just become fatter. They are also more able to advance their own unauthorised agendas.

Some of these people are so out of touch with Kiwi reality they’d think daylight saving would work better if run by Treasury.

Janet Albrechtsen, a columnist with The Australian, has neatly summed up your concern over growing bureaucracies pushing their own agendas. She wrote: “The only thing worse than a meddling government is an interfering, unelected, activist bureaucracy, trying to change the world by stealth.”

My first experiment with marriage ended disastrously. Harold had seemed a kind enough man, he had all his teeth and was (by and large) tattoo-less. However, he was terribly disorganised — so much so, that life with him became unbearable.

Six months have passed since I dismissed Harold, and I have found a new gentleman (Brian), who at first seemed entirely satisfactory. But when he invited me to stay over during the New Year break, I discovered something troubling.

I didn’t mind his asking if I’d object to him watching Bangladesh versus the Black Caps (I said “yes” provided he killed the awful howzat screams), but the alarm bells tinkled when he seemed surprised that I wash and dry his bottles before putting them out.

Confirmation I might have another Harold on my hands came when I opened the dishwasher and saw Brian’s knives and forks stacked together in the SAME (!) cutlery rack compartments.

I rearranged them but after dinner discovered Brian had not only put a frying pan in with the plates, he’d stuck teaspoons with his fruit knives.

I suspect this was deliberate. Is there anything I can do?

Sadly, Brian may be beyond saving. (From you.) Meanwhile you should compromise by substituting chopsticks for all his cutlery.

Dunedin built shrink city on rock and roll. It is true alienists are having lacunae, except for rostered on cruel, er, call.