Nuke threat not real but land war would be no joke 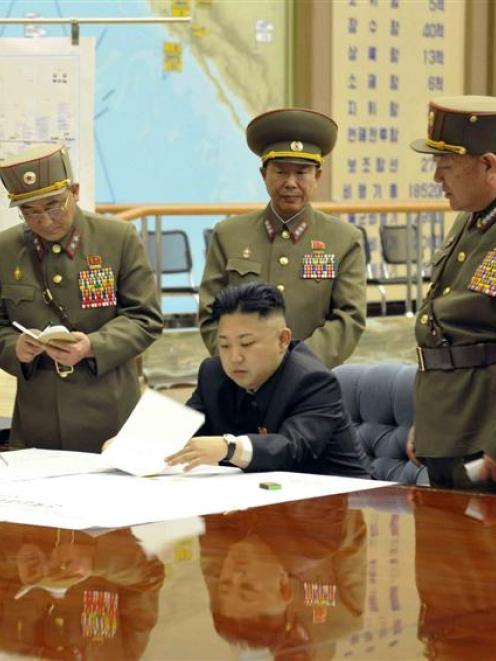 North Korean leader Kim Jong-un (seated) presides over an meeting on the Korean People's Army Strategic Rocket Force at the Supreme Command in Pyongyang, last Friday in this picture released by the North's official KCNA news agency. Photo KNCA/Reuters.
The US-South Korean military exercises will continue until the end of this month, and the North Korean threats to do something terrible if they do not stop grow more hysterical by the day.

Last week the Great Successor, Kim Jong-un, was shown signing a decree that ordered North Korea's long-range missile forces to be ready to launch against the United States, while senior military officers looked on approvingly.

On the wall behind Kim was a map, helpfully labelled ''US Mainland Strike Plan'', that showed the missile trajectories from North Korea to Hawaii, Los Angeles, Washington DC, and Austin, Texas. (Why Austin? Doesn't he like indie rock?) It was a scene straight out of the villain's lair in an early James Bond movie, except that they'd forgotten to set it in a cave.

These threats are so palpably empty that the instinct of both the Pentagon and the US State Department is just to ignore them. North Korea has no operational missile that can reach even western Alaska, no miniaturised nuclear warhead to put on such a missile, and no long-range targeting capability. But the politics of the situation demands that the US Government respond seriously to every threat, however foolish.

So next year the US Government will spend another billion dollars or so to place 14 more anti-ballistic missile sites in Alaska, presumably to protect the Alaskan west coast and the Aleutian Islands from a North Korean nuclear strike. And last Friday it sent two B-2 bombers all the way from Missouri, non-stop, to drop bombs on some uninhabited islands near North Korea, just to remind Pyongyang that it can.

It's all still just a charade, a spring display of military capacities by two rival armed forces that could as well be rutting deer. The United States would not even play this game if the logic of both international and domestic politics did not oblige it to respond to the increasingly rabid North Korean threats. But it is playing nevertheless, and the risk of miscalculation is quite serious.

Anybody who tells you he knows what is going on inside the North Korean regime is a liar but there are a few safe assumptions. Real decision-making power on war and peace almost certainly lies with the senior ranks of the North Korean army, not with young Mr Kim or the Communist Party. It's also clear that Mr Kim, new to power and insecure, feels the need to look tough, just as his father did when he inherited the leadership from Mr Kim's grandfather.

And nobody in the North Korean regime knows how things work in the rest of the world. They may even be genuinely afraid that the US-South Korean military exercises, although they have been held annually for decades, are this time only a cover for a plan to attack North Korea. After all, the regime's founder, Kim Il-sung, concentrated his forces under cover of military exercises in just that way when he invaded South Korea in 1950.

The North Korean military doubtless understand they must not get into a nuclear war with the United States but they may believe that their dozen or so nuclear weapons make it safe for them to use conventional force without facing US nuclear retaliation. And they do have rather a lot of conventional military force at their disposal.

Kim Jong-un's threats are being exposed as bluffs almost daily - the US-South Korean military exercises go on as though he had said nothing - and he may ultimately feel obliged to do something to restore his credibility. It would probably be just a limited local attack somewhere but in the present atmosphere, with both Seoul and Washington determined not to submit to psychological blackmail, that could escalate rapidly to full-scale conventional war.

It would be a major war, for although North Korea's weapons are mostly last-generation, that is not such a big handicap in ground warfare as it is in the air or at sea. North Korean troops are well-trained and there are over a million of them. Moreover, South Korea is compelled to defend well forward because holding on to Seoul, only 50km from the frontier, is a political imperative. That makes it quite vulnerable to breakthroughs.

The North Koreans would attack south in a three-pronged thrust, accompanied by special forces operations deep in South Korean territory, just as they did in 1950. The geography gives them few alternatives.

US-South Korean strategy would also echo 1950-51: contain the North Korean attack as close to the border as possible, and then counter-attack up the west coast, on an axis heading north through Kaesong to Pyongyang. That would once again be accompanied by a big amphibious landing well behind the North Korean front, this time probably at Wonsan, on North Korea's east coast.

Even if the North Korean air force were effectively destroyed in the first couple of days, as it probably would be, this would be a highly mobile, hard-fought land war, in densely populated territory, involving high casualties and massive destruction. The world has not seen such a war for more than 50 years now.

We really don't need to see it again.