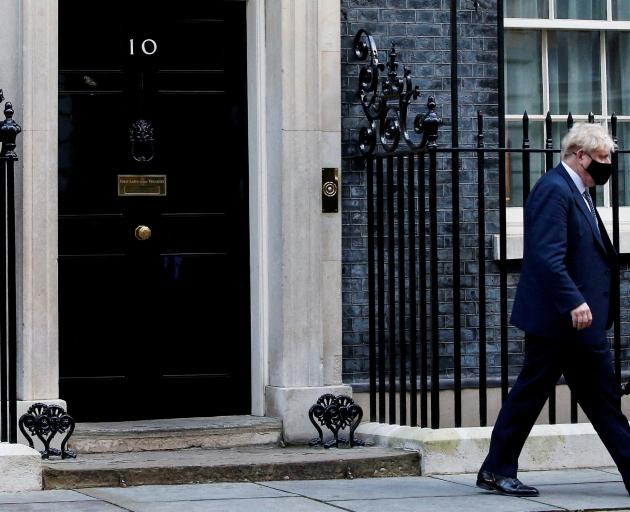 British Prime Minister Boris Johnson walks outside Downing Street in London, but his future is in doubt. PHOTO: REUTERS
Tories are paying a deserved price for giving the keys to Number 10 to a man they knew was unfit to be prime minister. Andrew Rawnsley, of The Observer, in London writes.

The defenestration of a prime minister between elections is usually triggered by a seismic event.

Neville Chamberlain was forced out after Norway was gobbled up by Hitler. The national humiliation of the Suez debacle did for Anthony Eden. The epic unpopularity of the riot-provoking poll tax impelled Margaret Thatcher towards her unwilling exit. David Cameron felt compelled to quit when he lost his gamble on the Brexit referendum.

If Alexander Boris de Pfeffel Johnson soon joins the gallery of toppled PMs, it will be because he attended a "bring your own booze" party in the back garden of Number 10 and his aides had a lockdown-busting piss-up in Downing Street the night before the Queen buried her husband.

No other premiership has had such a pathetically shabby ending. No finale to his slummy reign would be more appropriate. It has always been highly likely that cavalier and blatant rule-breaking, and then lying about it, would be the undoing of a prime minister with a career history of casual contempt for truth and integrity.

In its relatively short life, his premiership has been splattered with scandal. There was the "crony express" that sped lucrative Covid contracts to Tory mates down a "VIP lane", which the High Court has just ruled unlawful. There was the decanting of infected elderly patients from hospitals into vulnerable care homes at the height of the pandemic. Nor should we forget the multiple-sourced accounts that Mr Johnson callously declared that he would let the bodies "pile high in their thousands" in the winter of last year rather than take timely action to contain a resurgence of Covid, an appalling choice that resulted in many avoidable fatalities and has left Britain with the highest death toll in Europe.

These and other outrages ought to have deeply troubled Tories, but many in his parliamentary party responded to scandal after scandal with a dismissive shrug. Conservative MPs now profess their shock-horror at the torrent of revelations about booze-ups at Number 10, but few expressed concern about earlier disgraces when it did not appear to be costing them support.

Never mind the quality of the Prime Minister’s ethics, so they responded, feel the width of our poll rating. When previous charges of moral turpitude bounced off him, Tories told themselves that their leader was coated with a lacquer of Teflon so thick that nothing could stick. Some cynically opined that voters knew that Mr Johnson was a mendacious scoundrel when he won the election in 2019 and so appalling behaviour was expected and — ghastly phrase — "in the price". It was often averred that a substantial chunk of the public enjoyed having a "lovable rogue" at Number 10. "Everyone loves a sinner." So one senior Tory chortled to me last autumn when his party was still sitting on a poll lead even as Wallpapergate and several other scandals were on the boil. He went on: "If Boris was caught shagging a goat in Downing Street, people would immediately make a goat beer and drink to his health."

That senior Tory has had a sobering change of mind. He now thinks that Number 10 has generated a scandal so disgusting to the public that it will be terminal even for such a legendary escapologist.

"Is Boris toast? Yes, he is toast. He’s lost the armour that used to protect him from the normal rules of political gravity. That’s evaporated. It’s definitely over. The question is when."

Another former cabinet minister agrees: "The Teflon is all gone. The odds of him taking us into the next election are very low — in fact, near-zero."

A third Tory MP, previously a fervent admirer, says: "I think it’s over. I simply can’t see a way back from this."

Here we have a scandal that even the great trickster cannot blag his way out of. The half-confession he finally made to the Commons last week failed to defuse the outrage because it was extracted only under intense pressure and after weeks of false denials. His attempt to sound contrite didn’t work because it was a non-apology apology so reeking with insincerity that it added insult to the injury felt by the many who have been bereaved by the pandemic.

Everyone knows that the only thing he is genuinely sorry about is getting caught. Everyone also knows this: while large numbers were dying, often without the comfort of loved ones, and millions were making sacrifices to support what their government told them was a collective endeavour to control the pandemic, Mr Johnson’s Downing Street was on a booze cruise.

It is hard to say which is the more jaw-dropping. The flagrancy of the rule-breaking. The arrogant stupidity of it. Or the stunning frequency with which the denizens of Number 10 behaved as if laws did not apply to them.

The Prime Minister’s feeble plea in mitigation for the garden party that he admits to attending is that he thought it was a "work event".

This laughable excuse asks us to believe that he failed to notice that alcohol was flowing and that his wife and her chums were present. He had to fall back on such a risible defence because the alternative is to confess that he flouted his government’s regulations and afterwards sought to dupe the public and deceive Parliament.

We have learnt that the many shindigs at Downing Street included parties the night before a grieving Queen sat alone at Prince Philip’s funeral and at a time when any indoor socialising was prohibited.

Witnesses say that one staffer went off to the Co-op in the Strand to load up an empty suitcase with wine and beer, an aide played a DJ set in the Number 10 basement and a swing belonging to the Prime Minister’s son was broken by an inebriated party animal.

On Mr Johnson’s watch, during the most severe pandemic in more than a century and on the eve of the burial of the monarch’s consort, Number 10 was turned into a nightclub. One Conservative MP says that this revelation has caused "the most profound abhorrence" in his patch, especially among true blue types.

Another Tory MP reports that party members who were once fanatical Johnson devotees are spitting: "You’ve got to get rid of him."

Even if he was not physically present for all the parties, he was at every one in spirit. What possessed Number 10 staffers to think that it was sensible or decent to turn Downing Street into a drinking den while people were dying? As I like to remark from time to time, the culture of organisations is greatly shaped by the character of the person at the top. The most egregious rule-breaking became habitual at Number 10 and that is surely directly connected to the fact that the most senior person in the building is a compulsively shameless rule-trasher.

A growing number of Tory backbenchers think he should go, as do quite a lot of ministers, including some of the cabinet who are professing insincere loyalty oaths. Making things even darker for the Prime Minister, the Opinium poll indicates that he is shedding even his core support. Nearly half of those who supported Brexit in 2016 and then the Tories in 2019 say he should be out of Downing Street. What is lacking for now is a settled consensus among Tory MPs about when to remove him and who to replace him with.

Many have congregated around the idea that the May elections, when voters go to the polls across the UK, will be the litmus test. This is a cop-out from their moral responsibilities. If he is a disgrace to the high office he holds, he is a disgrace whether the voters fiercely punish the Government at the ballot box or the Tories improve on their terrible ratings.

Truth to tell, most Conservative MPs are exercised by this scandal because it makes them fearful of losing power, not because of what it says about the Prime Minister’s ethical character.

They never thought Mr Johnson was a man of sparkling integrity who would make a fine prime minister. They knew who he was. They made him their leader because they thought that winning is all that matters in politics and he looked like a winner.

Far too many people in the Tory party chose to ignore his unfitness to be prime minister. If they had bothered themselves with that question before, they wouldn’t have put him in Number 10 in the first place, nor shrugged so cynically at all the squalor that has ineluctably followed. — Guardian News and Media

Ah, Tories. Originally the opposition to the Whigs, with loyalty to the True Stuart Dynasty.

Could we have the next, please?