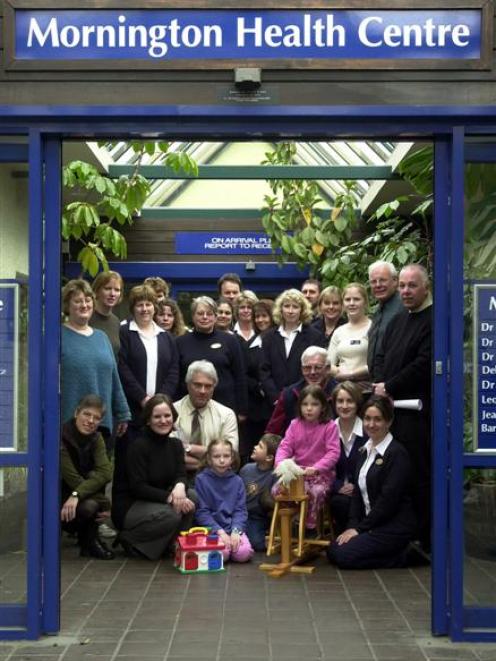 Doctors, nurses, staff and some patients at the Mornington Health Centre on September 30, 2003 as the centre became a Primary Health Organisation. Photo from ODT files.
Tony Fitchett says a monster PHO will only be able to fund blunt, lowest-common-denominator solutions and will not address local issues in the way that locally based PHOs can.

To achieve these aims it pumped money into primary care, and changed the subsidy paid for primary health care.

The fee for service subsidy, paid for consultation with a doctor, which had been in force since 1940, but was not indexed to inflation, changed to indexed capitation payments for each patient enrolled with a practice, to encourage teamwork between doctors, nurses and others in providing primary care.

Funding is provided through primary health organisations (PHOs), each of which has the duty of providing medical care for its enrolled population at reduced cost to the patient, improving preventive services, and addressing inequities in primary care, in accordance with the needs of the particular community it serves.

Each PHO includes representatives of the community, providers, and local iwi in its governing body.

As well as basic capitation funding for each enrolled patient, PHOs receive funding for services to improve access (SIA) and health promotion (HP), for those with high needs, and management services funding calculated on the total number of enrolled patients in the PHO.

Each PHO is responsible to its local district health board (DHB), and has matching contracts with its providers (mostly general practices).

The principles of the PHCS have been endorsed by the present Government, though it is at present considering changing some details of the system.

All, except Mornington, were initially managed by SLH, but in the past few years have set up their own, independent management structures.

All PHOs have improved access through lower fees for enrolled patients.

Other services vary between PHOs.

Mornington, clearly, has led the way, mainly because its independence and its sole-provider structure gives it more flexibility to address the needs of its patients, and it is now a national leader among PHOs in the services it provides and funds.

The other PHOs have made varying progress since acquiring their independence.

Until this year, the Otago DHB, unlike some of its northern counterparts, played a purely passive role in the establishment and work of the five PHOs in Otago, verbally encouraging their work but providing no extra resources, even where their work was shown to reduce the need for hospital care in the short term and improve health in the long term. Effectively, it was a hospital board in drag.

That changed this year, when a proposal by SLH to establish a new large PHO, covering Otago, Southland and South Canterbury, and hoping to attract general practices from existing PHOs, drew the Otago DHB management's attention to the fact that small PHOs had more management services funding per patient than large ones, so that replacing a number of small PHOs with one large one would mean less management funding overall.

Following a consultant's report on the proposal, the chief executive of the Otago and Southland DHBs, Brian Rousseau, has proposed, without any meaningful consultation with the PHOs, and contrary to the recommendations in the report of the recently released ministerial review group, that all PHOs in Otago and Southland be abolished, and replaced by a single PHO established by the DHBs.

He claims this will free up more than $1 million from management funding.

He wants this PHO to take over responsibility for matters that the DHB management has found too hard to deal with: self-referral by patients to the hospital's emergency departments (a hospital, not general practice, problem), budget-holding for drug costs (carrying the risk of overspending, but without the government underwriting enjoyed by DHBs), and responsibility for all community services.

This abrogation by the DHB of its responsibilities for primary and community services would effectively convert it to a hospital board pure and simple - not even in drag.

But a monster PHO cannot provide the local, community, provider and iwi connections of locally based PHOs.

Inevitably, its governance and management will only be able to fund blunt, lowest-common-denominator, general projects, which will not address local issues in the way that locally based PHOs can.

In the case of Mornington, will a monster PHO be able to fund existing services that have already been shown to improve access, prevent illness, and reduce inequity; and include hospital-admissions-free services such as primary mental health care, outreach services including the Maori/Pacific Island nursing service, cardiovascular risk screening (and diabetes detection), diabetes prevention, transport for those without their own, emergency prescriptions, etc, etc?

Health board management claims Mornington is overfunded, but this is not true: the only funding above the standard PHO formula is for its mental health service, from ring-fenced, contestable funding open to all PHOs, and a small research contract.

The extra factor that Mornington has is efficiency - more bang per buck.

Why destroy this? All PHOs have reserves. Mornington has some, like any prudent funder, but some PHO reserves are much larger, because their slower establishment of new patient services means initial funding has not yet been fully spent.

Is Mr Rousseau looking to those reserves (money provided specifically for primary care) to help bail out the DHB's current deficit? The Audit Office's finding that the DHB has overcharged for mental health services resourced from ring-fenced mental health funding does not give confidence that DHB management understands funding boundaries.

The Government has already signalled reductions in management services funding, so the savings available to the DHB will be smaller than predicted.

Are reduction of a hospital deficit by diversion of money provided for primary care, and the chance to unload difficult problems on to a subsidiary body, really justification for cutting off the extra services provided by present PHOs, dumbing down services to the lowest common denominator, and thus increasing again the demand for hospital-level services? All existing PHOs accept that times are hard, that there are funding constraints, and that cost-cutting, co-operation between PHOs and shared initiatives are necessary.

Indeed, they are already happening.

The way forward for the DHBs is to encourage and facilitate this: to work for co-ordination, and improvement of the services offered by all PHOs.

The Government wants to move more services into the community, and expand those services already provided, through integrated family health centres.

That will only happen with true partnership between DHBs and PHOs, not through dictatorship by the DHBs.

And dictatorship will certainly not give primary care providers the confidence needed to invest in integrated family health centres.

Many eyes will be watching to see if it addresses honestly its statutory responsibility for primary care, or meekly accepts this uncosted, top-down, dictatorial and ultimately destructive model.