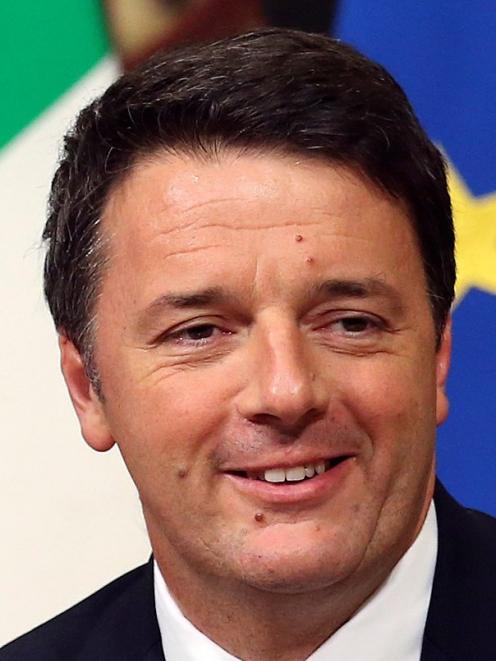 Matteo Renzi
On Saturday, there is the Mt Roskill by-election. On Sunday, there are two votes that could have a far bigger long-term effect.

John Key has campaigned hard in Mt Roskill to get Parmjeet Parmar up and get back the majority with Act New Zealand alone that last year's Northland by-election took away.

Labour's stakes are at least as high. It has slid in opinion polls this year, which a Mt Roskill loss or narrow win would compound.

Whatever the result, tea leaf readers will fossick for signs of doom or hope for Labour. But by-elections are dodgy ``evidence'', unless there is a big shift one way or the other, as in Northland, after which National stepped up regional initiatives, and in Marlborough, lost by National in 1970, which was the start of a slide.

But Mt Roskill is small beer beside two other votes on Sunday.

One is a referendum to adjust Italy's convoluted electoral system to, among other things, make forming a majority government much easier.

Matteo Renzi, the pin-up prime minister who called the vote, has sworn to resign if it fails, which looks distinctly possible, even probable.

So what? Hasn't Italy had 65 governments in 70 years? In any case, opposition parties have conceded some change is needed.

Mr Renzi is in double trouble. In an age of widespread rising anti-elite populism in liberal democracies, he pitched himself as the anti-elitist reformer who would get Italy moving.

He hasn't got the economy sparking. The anti-elitist role has been gazumped by the Five Star Movement (M5S), set up by comedian Beppo Grillo, which in June won the mayoralties of Rome (38-year-old Virginia Raggi) and Turin (32-year-old Chiara Appendino) and has polled nationally in the 30% range.

M5S wants Italy out of the euro currency union. So does the resurgent far right Northern League. An Italian withdrawal could - some say would - wreck the euro.

A ``no'' vote on Sunday would open up such questions and in any case cause such uncertainty that the fragile Italian banking system would be threatened and the cost of servicing the country's crippling fiscal debt would climb.

Populists elsewhere in Europe, already numerous, would be emboldened and probably gain more ground. Brexit was the earthquake. There are multiple aftershocks.

Watch Austria on Sunday, too. In April, Norbert Hofer of the far right Freedom party lost a presidential election by just 31,000 votes - so close that when minor irregularities were discovered, the election was annulled and rescheduled, first to October 2, then, when the glue on postal vote envelopes proved unsticky, to Sunday.

Though the presidential role is largely ceremonial, like our Governor-General's, a win for Mr Hofer or a close loss would give air to growing autocratic tendencies in some former eastern Europe Soviet satellites' still adolescent democracies.

Hungary's authoritarian Prime Minister Viktor Orban has declared Hungary an ``illiberal democracy'' and leans towards Russia - which itself is a seriously destabilising regional force. Moldova and Bulgaria this month elected pro-Russia presidents. Poland's right-wing Law and Justice Government has tried to concentrate power unconstitutionally in its own hands.

Across western and southern Europe, right and left anti-establishment - essentially populist - parties have been gaining ground, even in usually stable Germany.

In the United States, Donald Trump, president-elect (on a 1.5% popular vote deficit), is still spouting contradictory or vague policies.

Mr Trump has emboldened China. At the Apec summit 10 days ago, President Xi Jinping pushed the China-backed Regional Comprehensive Economic Partnership in place of the near-dead Trans Pacific Partnership. He said in a side meeting China would lead the way in developing trade agreements open to all and would ``fully involve ourselves in economic globalisation''.

In short: where Mr Trump pulls back, Mr Xi will muscle in.

That fluidity has prompted the Australian Labor Party to toy with an ``independent foreign policy'' - echoing New Zealand's, which it has deplored for three decades.

All this spices an Institute of International Affairs conference today on ``the global future'', which will explore the digital revolution's globalising impetus but also ask if New Zealand will have to choose between security interests, as a ``Western'' nation, and business interests, tied to China.

We can't just hide. As Associate Conservation Minister Nicky Wagner has noted in a conservation context, New Zealand is globally responsible for a vast, mostly marine ``arc of influence'' from a wedge of the Antarctic to the proposed Kermadec sanctuary, which poses, she says in a report, big challenges but also big strategic opportunities.

That parallels what Treasury secretary Cabriel Makhlouf will push for in an economic context at today's conference: a need for a strategy of ``globalism'', not ``protectionism''.

That needs other countries to be global, too. Which includes Italy and Austria. Their votes on Sunday will feed into global currents which will wash up here.