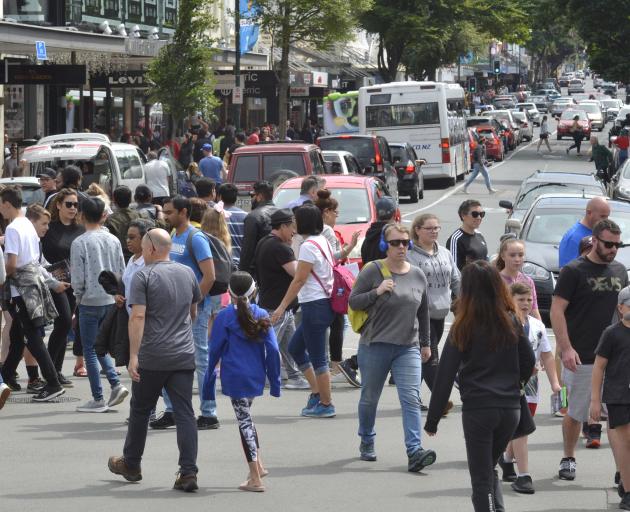 An inviting streetscape is a desirable outcome for any revision of George St. PHOTO: ODT FILES
OPINION: Key stakeholders have been ignored in the George St upgrade project, writes Alan Race.

It is troubling that the concerns of key stakeholders, who have the most to lose financially as a consequence of the upgrade of George St, were totally ignored when the Dunedin City Council decided to go ahead with the second-choice one-way option contrary to the recommendation of its own staff.

A small number of interested parties with no financial risk in the George St precinct held more sway with nine councillors than the many stakeholders who will be personally affected.

These stakeholders, with justifiable concerns over their potential future financial viability, were labelled as invested loudmouths by one city councillor, who may never have owned a business nor had the personal responsibility for employing staff whose livelihoods would be at risk if the business failed.

As a member of the Central City Advisory Group, I was impressed with the independent expert, Kobus Mentz, and participated in the feedback requested by council staff. Mr Mentz had taken on board the views of all participants and made his recommendations based on these.

Most of the stakeholders’ concerns were dealt with in the report and were acknowledged by the council’s own staff. The comments made at the council meeting ignored staff recommendations and were virtually the same as those used when the one-way option was accepted in 2019. Why bother having a Central City Advisory Group or an independent reviewer?

Nothing put forward was reconsidered with an open mind and the whole process has been a waste of time and money, and has impacted council credibility. It appears to me that the consultation was done simply to placate both the critics of the 2019 plan, and the large volume of public feedback that was submitted at the time of the annual plan review, which opposed any change to George St. In addition, the petition signed by 6500 concerned citizens was totally ignored.

The city council is elected to manage the interests of the ratepayers using the public purse. Mayor Aaron Hawkins was no doubt concerned that his ‘‘team’’ was defeated when the advisory group was proposed to review the George St project, clearly stating at that time that ‘‘the work would continue anyway’’. If a major upgrade is planned, then it makes sense to overhaul the underground services first to ensure these do not fail when the new street architecture is in place.

The concern must be the way the city council has proceeded with a focus on a ‘‘green ideology’’ to significantly reduce the cars used in the shopping precinct. The suggested loop bus will not be well supported if it is only heading in one direction with passengers having to wait for ages to get to their intended stop. Safety was stressed as a key driver in the majority decision for the one-way option, so why ask a staff member if a two-way loop bus could function on a one-way road?

It now seems that only the young, fit and healthy residents will be able to enjoy the city centre in the future.

The fact that the council has introduced this plan as a ‘‘done deal’’ with the two-way option ruled out is an appalling restriction of our residents’ independence when cars are still clearly the mode of choice for transport.

The Dunedin City Council should have thought the George St project through very carefully to ensure ratepayers will not end up footing the bill in the future to reverse another expensive failure. It is all very well saying the one-way option will be flexible enough to be converted to two-way if they get it wrong but that still costs the ratepayer.

It is obvious that many councillors have no concern for borrowing vast sums and shoving the ultimate cost on to us, the ratepayers.

An inviting streetscape is a desirable outcome for any revision of George St, but it still needs to be fit for purpose for the benefit of our retail shops and businesses. Why has there been a total lack of engagement with these people by the council?

Do they really want to antagonise those who invest in our city? The establishment of the advisory group did not end up with the councillors voting for the option preferred by those with the most at risk.

Was the process a genuine attempt to listen to the businesses, or to focus predominantly on those who visit the area rather than those who, with their staff, need to financially survive? It seems that our council is not able to consider, in a collaborative way, the review of George St with one or two members focusing on the carbon zero goal as the main purpose for change.

Urban Access Dunedin surveyed more than 1100 respondents, which showed that about 75% chose to use their cars to travel into the city and half indicated they would never use public transport for valid reasons.

There was a public outcry earlier in the year when a temporary 10kmh speed limit in George St was imposed as a Covid-19 safety measure. The proposed one-way street will, by necessity of the design, be limited to 10kmh once again.

Slowing up traffic and adding congestion to other streets is counterproductive. Restricting cars in the area while supporting the carbon neutral ideal, will benefit no-one.

We must consider our carbon emissions, but without the appropriate traffic modelling, yet to be done, traffic will be forced to find an alternative route to George St.

This will increase rather than decrease emissions.

Change is inevitable but to succeed it must be supported by the people most affected.

The $60 million budget put aside for changing George St is a substantial cost to be borrowed by our city council and repaid by our ratepayers.

We cannot destroy our city in this process.

You get what you vote for Dunedin.

Dunedin has been Scammed by Hawkins and his loyal followers, He has no intention of considering experts advise if it doesn't fit within his agenda and the https://iclei.org visions. Dunedin you have been conned

Wow - Imagine if a global recession was looming, your business had been closed for an extended period due to Covid, reduced sales, staff let go, no cruise ship or foreign value entering the market, then this is foisted on you to absorb - what a great initiative leading into a business led economic recovery. I would just cut my losses and sell up, walkaway etc anything to not have to deal with the fact that x demoralising months will pass while they complete the task at the slowest speed as economically viable. If it ain't broken don't fix it and if it is broken just repair it, save the funds, pay down debts and move on. Next CBD on Julie Anne Genter's hitlist - Mosgiel. Maybe construction could construct some things that actually need constructing like a hospital, whereas this is just revisionism squared.

While I'm all for pedestrian friendly streets in Dunedin, like in other cities, I must admit the council's agenda driven process has done nothing to help. And don't get me started on the blue dots!