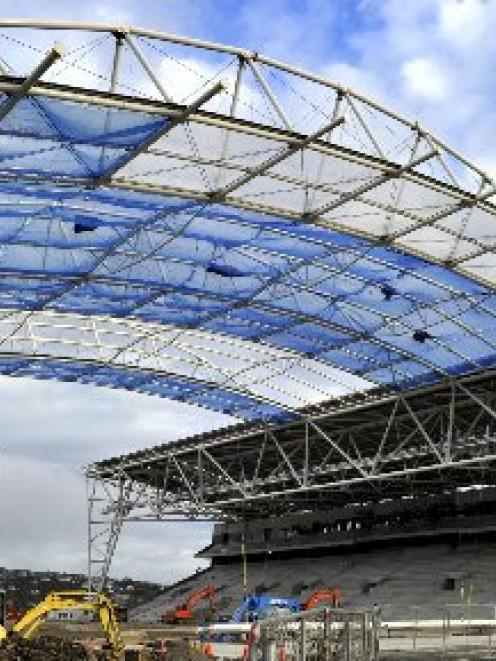 The first sections of 20,558 square metres of ETFE (ethylene tetrafluoroethylene) that make up the Forsyth Barr Stadium roof were revealed this week. Photo by Gerard O'Brien.
The elections are almost upon us, and Dunedin is warming to the task of choosing who should act as its stewards for the next three years.
Otago looks on. Southland looks on. And there is absolutely no question about what the key issue will be this time around. For all of us, almost without exception, the elephant in the room, which will be trumpeting loud and clear, will be the new stadium.

We are all sick of the debate. Both sides are exhausted with the impossibility of reconciling the events of the past few years. The supporters are fed up with the attitude of the naysayers, while the detractors are continuing to smoulder about the reckless waste of ratepayers' funds. We are all sick of squabbling, but the die has been cast and we are obliged to resolve the splits in our fractured community.

The detractors wrestle with an impossible sense of frustration in response to the consequences of the presumed financial wheeling and dealing. Commercial sensitivities obfuscate the truth. For these naysayers, the future seems bleak. Of course the stadium is a brilliant building. t's just such a shame that we have borrowed so much to construct such a limited asset. here were so many options, and so many ways to revitalise our city. Give us $200 million and we could have set the place alight. But instead, all we have is an unusual-sized rugby ground, to replace the one that we already loved.

However, for those who have been captured by the vision, the future looks great. At last Dunedin can boast of a waterside sports facility that Auckland dreamed of but couldn't create. The stadium will become our cathedral - an awe-inspiring focal point for a community punching above its weight. Sure, it has cost us, and sure, there are risks, but somehow it will become a new symbol for our forward-thinking, innovative approach, and the indirect benefits to the city will be huge. Without it, we would wither and die.

So we are facing a huge communal dilemma. Rarely in the recent history of democratic communities can we think of a decision taken by civic leaders that has been so risky, so focused, and that flies in the face of such huge public resistance.

President Pompidou, of France, once built a ridiculous glass pyramid smack bang in the middle of the Louvre, one of Paris' most impressive historic buildings. Anyone who has seen it, or has talked to Parisians, will know that it still sits uncomfortably with them. Sure, it's a challenge. Sure, it's a talking point, and a point of difference. But at the end of the day, like us, Paris is struggling to assimilate a vanity project, and one that has seriously compromised a historic site.

Although the construction of the Pompidou pyramid did not bring Paris to its knees financially, the challenge was very similar to our own, in that the people were obliged to embrace a debatable project that most of them abhorred.

Often councils lose money. Often they plan foolishly, but rarely does the legacy loom as such a large white elephant that we will now all see every day of our lives.The orange slash of the Mitre 10 Megastore now pales in comparison with the insult of the soaring arches of a stadium without purpose. The financial business plan for the stadium, visually impressive as it is, seems fatally flawed.

A significant percentage of the community feel hugely conflicted. It is pointless to rail endlessly against what has already happened.
It is equally difficult to try to embrace a project that has been consistently resisted by so many. The objectors now have no choice but to get in behind the stadium, or perhaps to leave town. They are all caring, passionate citizens, but the city fathers have clearly not yet sold them on the vision, and they struggle to engage.

But those who think the stadium is a great idea, and one which will guarantee Super 15 rugby, extra students at university, and regular world-class rock concerts, will also experience a cumulative concern.

Already, the university is capping student numbers. Already, South Africa is talking of withdrawing from the Sanzar competition. The Otago team is struggling. Leonard Cohen is not coming to Dunedin. Jetstar still inexplicably avoids us. Every day, news items will generate a sense of increasing unease. The obvious risks may well prove to be manageable, but maybe they won't. Who would know?

Intriguingly, there has been a recent glimmer of hope as to how it all might be. The recent suggestion that the new stadium can be used by Animation Research as a virtual cricket academy is absolutely great. Despite being told that the ground is too small for cricket, the wonderfully inventive Ian Taylor tells us that he can still use the facility to train cricketers!

This is brilliant! Suddenly, we see a spark of what we all love about Dunedin. Tell us that we can't, and we will find a way. Make one of the most questionable investment decisions ever, and we will try to mitigate the consequences. Although it should be noted that this plan in itself will not actually add much value to the stadium, and it could have been done in the Edgar Centre anyway, it is at least a start, and a start is what we need.

There will be no comfort for objectors in saying "I told you so", because the stadium is here, and it is clearly here to stay. Conversely, there will be no comfort for supporters, because the risks will be varied and ever present. For years and years and years to come.
In the coming elections, the challenge will be the same for all candidates: How to sell us a vision of how the stadium can be used, that will engage both our heads and our hearts.

As the election process evolves, it will be of huge interest to citizens on both sides to see how candidates address the very real problem of getting in behind the bricks and mortar, and somehow making the stadium the focus of our civic pride. A tall order indeed. What's done is done. e all need to accept that. And we have a stadium, for better or for worse, and it is impossible to ignore.

This stadium is clearly not just about sport. It's about issuing a challenge to the long-suffering folk of Dunedin to come up with inventive ways to make it work. To pluck triumph from adversity. To help right the ship, and to sail on with a visionary captain who has the trust, loyalty and support of both the passengers and crew.

Somehow, we have to turn the stadium from being the most divisive project in the history of the city into a genuine focus for regional pride. There is no way it will be easy, but someone has to step up with a realistic vision to take us forward with confidence. We need the incoming council to show genuine integrity in its decision-making, to listen properly, and to connect authentically with the constituents.
Finally, it needs to provide us with a vision for the stadium's use that truly adds real value to the quality of life in our great city.

Never mind who got us into this mess. The real question now has to be: Who's going to get us out of it?