Projecting the spirit of ancient prophets

Not all the prophets are biblical and ancient, says Ian Harris. Israel has its modern equivalents. 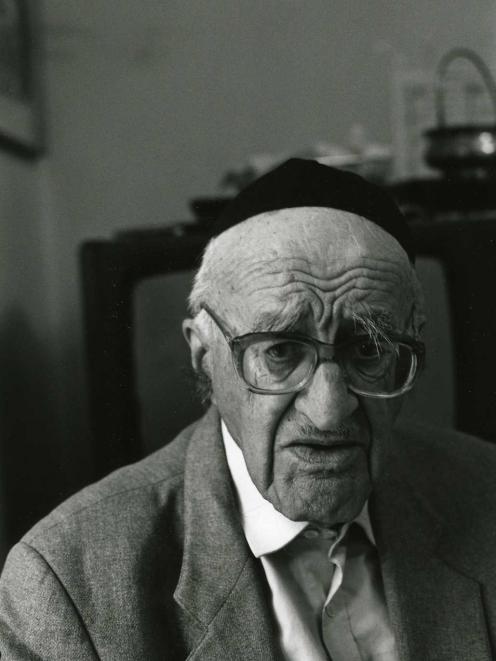 Yeshayahu Leibowitz. PHOTO: WIKIMEDIA COMMONS
Few New Zealanders would begrudge Jews their right to live securely in their own homeland. Promotion of the Israeli cause has been such that fewer may be prepared to acknowledge the right of Palestinians to do the same. Which is a pity, because all people should enjoy that same right.

European persecution of Jews, bumbling British colonialism and Zionist terrorism all contributed to the birth of the Israeli state 70 years ago last month. Fourteen wars or military campaigns since then have fuelled a devil's brew of hatred and despair, occupation and revolt. Events marking the anniversary of that Jewish triumph and Palestinian "nakba", or catastrophe, suggest that nothing will improve any time soon.

US President Donald Trump celebrated the occasion by recognising Jerusalem as Israel's capital and shifting his embassy there from Tel Aviv. "Trump is a friend of Zion", "Trump makes Israel great again", crowed the banners. Meanwhile at the border with Gaza, Israeli troops opened fire in a Soweto-style massacre, killing 59 protesters and wounding more than 2000.

So is the emergence of today's Israeli state a triumph or a catastrophe? It takes a prophet to sort that out. In the Bible a prophet is one who speaks truth to power, and the Jewish tradition has a heap of them. They posed moral problems in a way that stung both political and religious leaders, so were never popular.

Modern Israel is fortunate to also have its prophets. Among them was Yeshayahu Leibowitz, who died in 1994. Ultra-orthodox in his religion, champion of the Jewish right to a secure homeland, he was also scathing in his denunciation of the expansionist nationalism of most fellow-Israelis. To him, the military occupation of the West Bank and its pepper-potting with Jewish settlements is an Israeli own goal, the country's self-made moral catastrophe.

"Security is a reality only where there is true peace between neighbours, as with Holland/Belgium, Sweden/Norway, the US/Canada," he said. "In the absence of peace there is no security, and no geographic-strategic settlement on the land can change this."

Calling for moral clarity, he said religious arguments for annexing the West Bank only expressed the transformation of the Jewish religion into a camouflage for Israeli nationalism.

"Counterfeit religion identifies national interests with the service of God," he charged, "and imputes to the state - which is only an instrument of serving human needs - supreme value from a religious standpoint." That, of course, is idolatry, and all the prophets condemn idolatry.

Leibowitz insisted that not every "return to Zion" was religiously significant, citing the biblical prophet Jeremiah: "When you returned you defiled my land and made my heritage an abomination."

The occupation of a hostile West Bank would not only deprive two million people of civil and political rights, he warned, it would also corrode Israel's democracy.

A spate of anti-Christian and anti-Arab hate crimes four years ago led other Jewish intellectuals to think he was right.

A winner of Israel's highest civilian honour, writer Amos Oz, branded the perpetrators as "Hebrew neo-Nazis". He lamented that "our neo-Nazi groups enjoy the support of numerous nationalist or even racist legislators, as well as rabbis who give them what is in my view pseudo-religious justification".

"No, not neo-Nazis," responded journalist Uri Misgav in the Tel Aviv newspaper Haaretz. "It's Judeo-Nazis. It's racism, murderousness and profound hatred originating in a religious-messianic worldview that is fuelled by the occupation and settlement enterprise."

He added sadly: "There is no place where we can take the shame and the terror. The centre is apathetic. The left is defeated and afraid, in despair ... Meanwhile generations of Israelis, incited and consumed with hatred, are flooding the public space, and there is nobody to confront them."

Israeli-Swiss Professor Carlo Strenger, of Tel Aviv University, adds: "Israeli public discourse is shaped by the collective denial that the occupation has been Israel's political and moral catastrophe ... Nationalism, militarism and the value of the state dominate public discourse, and politicians compete with each other in the use of nationalist cliches in order to become electable."

And Jews abroad? One of them, American Mitchell Plitnik, says they have to choose between "mindlessly supporting Israel in its drive to suicide and its daily practices of occupation and settlement expansion, with all the human rights violations that these necessarily imply", and heeding the words of prophets like Leibowitz and other progressive and visionary Jews.

That shows true moral clarity. It projects the spirit of the ancient prophets into the heart of the modern world.

There is Zionism, and there is Jewish wisdom, older than Christianity.