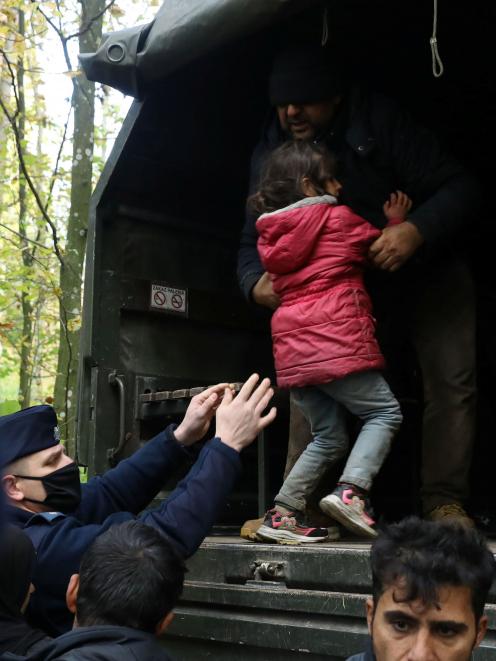 Iraqi migrants are put on a military truck after being caught by border guards and police officers after they crossed the Belarusian-Polish border earlier this month. PHOTO: REUTERS
As human misery mounts at Europe’s borders, a compassionate, joined-up solution to migration is required, writes  The Observer.

Imagine being trapped at night in a freezing forest between Poland and Belarus. There is no shelter, no food, no warmth. If you try to head west, the Polish army pushes you back. If you try to return the way you came, Belarusian border guards bar your path. And this happens again and again. You are stranded. There is no way out.

For untold numbers of refugees from Syria, Afghanistan and other crisis zones, this Kafkaesque nightmare is playing out right now, with sometimes fatal consequences. Polish authorities have reported more than 15,000 attempts to cross the frontier into the EU since August, and this has risen to above 500 a day in recent weeks.

The UN and human rights groups claim that Poland is breaking the law by refusing asylum to these migrants. The European Commission is angry that the area has been closed to its officials and the media. But Warsaw is undaunted. Parliament voted last week to build a permanent £295million ($NZ568million), Trump-style Belarus border wall.

The Polish standoff appears to be partly the result of a deliberate effort by Alexander Lukashenko, Belarus’ president, to entice would-be migrants into the country with free visas and cheap flights, then oblige them to travel west. This ‘‘hybrid war’’ of pressuring the EU is his supposed revenge for sanctions imposed by Brussels last year.

Uncontrolled migration, politically manipulated or not, poses an ever greater challenge for states all around Europe’s periphery, not least the UK. But politicians’ attempts to deal with it often appear chaotic, uncaring and illegal. Everywhere, or so it seems, sympathy for refugees is in desperately short supply.

Greece, Italy and Turkey have been repeatedly accused in recent months of violent ‘‘push-backs’’ — forcibly repulsing irregular entrants while making no distinction between asylum seekers fleeing political persecution, refugees from wars, famine or climate change and economic migrants. All three deny the accusations.

The situation on the Iran-Turkey border is said to be particularly acute. The International Organisation for Migration estimates that up to 30,000 refugees have fled Afghanistan every week in recent months. Many who try to enter Turkey on the way to Europe say they have been beaten or abused by border guards who refuse them sanctuary.

France, Greece, Italy and Spain are all struggling to deal with surges of migrants travelling north from Libya, Eritrea, the Sahel and sub-Saharan Africa. This in turn feeds another, linked crisis: the record numbers trying to enter the UK who place their lives in the hands of heartless people smugglers and small craft ill-suited to the Channel.

The brutal approach adopted by Priti Patel, the home secretary, in her new borders Bill reflects varying levels of hostility, indifference, incompetence and illegality similar to those shown towards migrants by some EU counterparts. Leading immigration lawyers claim Patel’s plans breach international and domestic law in at least 10 ways.

It’s not new to suggest Europe’s deepening confusion over migration policy is distorting and damaging its politics, social cohesion and values, but it is fair to say the trauma is getting worse. Despite a poor national election showing last month, the anti-immigrant Alternative fur Deutschland, which grew fat off the 2015 Syrian refugee crisis, still wields significant influence in eastern Germany.

France’s 2022 presidential election campaign has been dominated so far by issues of migration, Islam and identity. In Denmark, under pressure from the far Right, the Social Democrat-led Government of a famously tolerant, welcoming country is pursuing some of the harshest anti-immigrant policies seen anywhere in the EU.

Amid the mounting human misery around Europe’s borders, the lack of co-operation between states struggling to overcome a shared problem stands out. The EU has tried and failed to forge a common approach. It must try again, urgently, and Britain should assist. A little more compassion would be good, too. — Guardian News