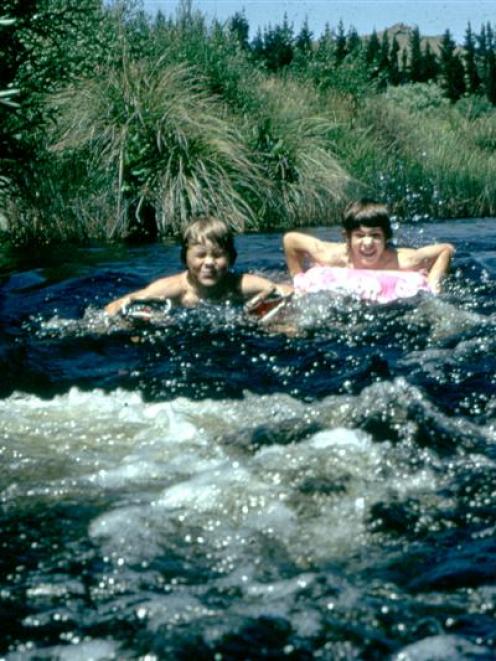 Children enjoy the clear waters of Deep Stream in the 1970s. Photo by Donald Scott.
How should the country balance the interests of tourism and the dairy industry when it comes to river pollution? First, by recognising that there is an issue, writes Donald Scott.

The recent number of letters and articles in the Otago Daily Times on river pollution suggest there is something worrying in this area. The components of intensive dairy farming - the number of cows in a catchment, the extensive irrigation, the addition of nitrogen and phosphate fertilisers - all add to the burden on rivers.

And the examples for Otago and Southland are alarming - in 2008, Environment Southland issued public warnings of high E.coli (from animal faeces) in the Waikaia, Oreti and Mataura rivers: No swimming and don't eat the fish.

Anglers have largely deserted the Taieri in the Maniototo where E.coli counts (ORC, 2008) were 24 times higher than acceptable standards, and the residents of Omakau are rightly concerned about their water supply, which lies in the riverbed below a new dairy farm on the Manuherikia. Fish & Game Otago, and New Zealand Fish & Game Chief Executive both argue that there is widespread dissatisfaction with the way in which freshwater resources are being protected. Federated Farmers dairy chairman David Wilson made a plea for balance between environmental protection and the profitability of the dairy industry.

At the national level we have NIWA scientists (Dr Mike Joy and Dr Rob Davies-Colley) stating that our freshwaters have deteriorated over a 20-year period with the finger pointed at intensive pastoral farming.

So where are we? The dairy industry earned about $NZ10 billion in 2008 (25% of export income), while international visitors spent about $NZ 8.8 billion on tourism. This leaves us with some sort of balance between tourism and the dairy industry, but what we don't know is how much tourism relies on the absence of water pollution.

One indication is the actions of Environment Waikato which produced a variation to the Regional Plan in 2007 aimed at protecting Lake Taupo.

This includes limits on the amount of nitrogen leached from rural land use activities, with dairy farming requiring resource consents.

The aim is to reduce nitrogen losses to the lake by 20%. While we do not have waters as iconic as Lake Taupo, we do have rivers that are at risk, and the question is what options are available for minimising this risk.

The Resource Management Act obliges regional councils under S 30 (1) (c) ( ii) "to control the use of land for the purpose of maintenance and enhancement of the quality of water in water bodies and coastal waters".

This seems fairly clear, but in the ODT (29.4.09) the chairman of the Otago Regional Council states that ". . . directing what was an appropriate use of private land was not an area in which the council was thinking of becoming involved."

He qualifies this by stating that they would ensure compliance of any land use on private land, and adds that land use was more the jurisdiction of a district council.

The territorial authorities do have an obligation under 31(a) of the Act, but it is less precise than the obligations of the Regional Councils.

So the major responsibility does lie with the Regional Council.

Compliance is the key feature here, and this probably covers things such as berm fencing, control of dairy shed effluent and possibly the encouragement of riparian planting to intercept movement of undesirable substances in ground water. While these policies would help, they would not necessarily reduce the impact of intensive dairying by a substantial amount. The reason is that while the cows are out grazing, they are adding to the inputs to the waterways either by nutrients reaching ground water or surface run-off.

However, the ORC has recently prosecuted farmers for allowing effluent to flow into rivers, so there is hope here.

This non-point source pollution is the most difficult to control and the simplest, but politically least attractive, option is to control the number of cows in the immediate catchment area.

The number is not the only factor as rainfall, soil type and topography all affect how pollutants reach the rivers.

This is why the ORC faces a difficult situation, and it is also why action at a higher level may be required.

The balance between dairy income and the clean, green image-enhancing tourism is difficult, but it must be faced at some level.

Regional Councils derive authority from the RMA, but there is no further administrative control or guidance.

The present government is working on an Environmental Protection Agency and this sort of legislation has worked in some countries.

Such an agency could ensure a minimum level of policy development and execution.

Donald Scott is a retired zoologist and is at present an Otago Fish & Game councillor.