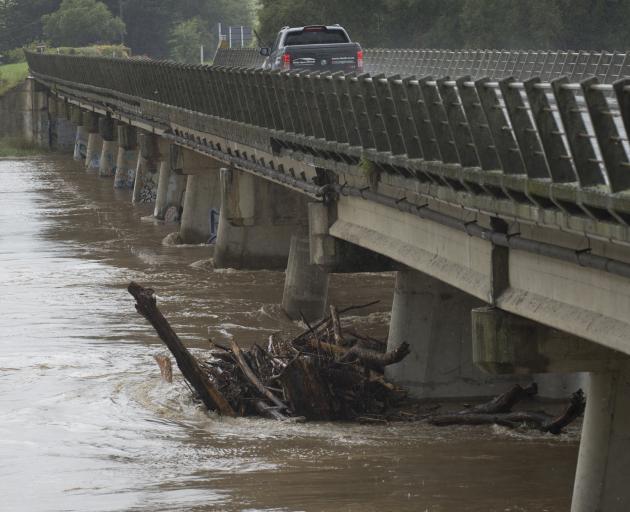 Flood debris is trapped under the Outram Bridge during the weekend’s heavy rain. PHOTO: GERARD O’BRIEN
Last weekend’s heavy rain and flooding showed how susceptible we are to natural events.  It is time to start mitigating the impact, writes Gerrard Eckhoff.

It is drawing a rather long bow to describe the prolonged rain event over Christmas and New Year as a visitation by at least one of the four horsemen of the Apocalypse.

The white, red, black and pale horses (according to legend) carried with them conquest, war, famine and death.

For most of us however the rider of the pale horse (death) has to be Clint Eastwood who certainly brought the lives of all the bad guys he encountered to a rather abrupt end.

To a Central Otago cherry grower however, all four horsemen would seem to have arrived with the rain which reaped almost complete destruction of their crops.

The rain event and resultant floods tore away some bridges and roads, fences and riverbanks as the silt-laden waters made their way to the ocean. It is, however, worth reflecting on these relatively regular occurrences least someone really does predict the floods and Covid-19 as the harbinger of the apocalypse as predicted in the Bible’s Book of Revelation.

The Taieri plain is the recipient of soils from riverbanks being torn asunder by raging stormwater, carrying the silt from ‘‘up country’’ to be spread over the plain which in turn gives that fertile area its ability to grow more of anything.

The Mississippi River and indeed all fertile river deltas were formed not by gentle summer rains but by torrential downpours, carving into and carrying away the topsoil as riverbanks are whittled away only to end up settling over what is now fertile farmland. The silt in the riverbeds also builds up and blocks the mouth of the rivers, forcing the floodwaters to spread. ORC please take note.

Those in officialdom saw fencing of waterways from stock grazing as a sure-fire method of securing the riverbanks as grazing pressure was removed and revegetation of the banks took place — for a while.

The unintended consequence of such a policy is a huge increase in debris as self-seeding gorse and broom take a hold along the banks of the waterway — only to end up completely saturated and impossibly heavy as they inevitably fall into the river, thereby exposing the bank to the ravages of the floodwaters. Much of that vegetation ends up entangled in the very fences designed to protect the bank.

Old willow trees fall and find their way downstream smashing into and against bridge piles, creating such forces on the piles of the bridge that they finally give way. All of which is and was entirely predictable.

It is however another rain-related issue that merits being cast as the fifth horsemen of the apocalypse.

An environmental disaster awaits that is now as predictable as the flowers that bloom in the spring.

Central Otago is classified as a desert in terms of its rainfall. Getting anything to grow requires water, hence irrigation on a small garden-scale through to the much larger centre pivot — until that is, a rainfall event occurs. Seed which has remained dormant for years in dry parched soils will now lie in moist soils as a result of days of rain.

A multitude of wilding trees spread their seeds on the wind and they will now start to sprout in places where it was impossible without serious rainfall. 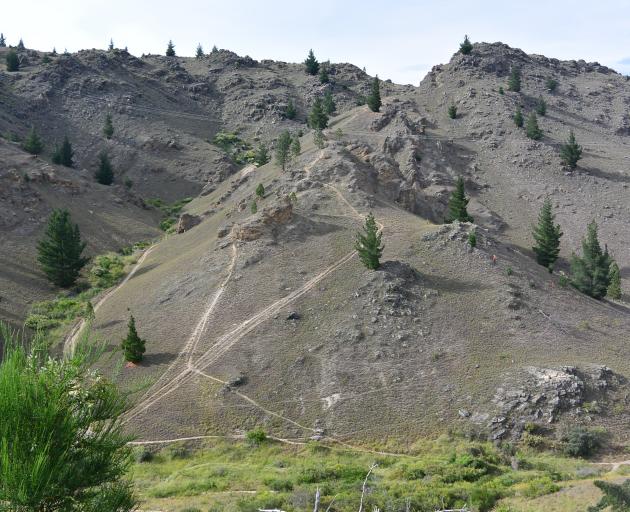 In a year or so, a sea of green will appear under the sheltered protection of a cover crop — the fawny brown of the tussock grasslands. There the wilding tree, without grazing pressure, prospers, growing unseen until it is too late.

If landscape is important, as it is to most, then close monitoring over hundreds of thousands of hectares must occur.

The ungrazed and unmanaged Doc estate, has received vast quantities of seed every year, just waiting for such a soaking summer rain as Central Otago has just received.

We now await the signs of the arrival of the fifth horseman who will take a year or so to make his presence felt. When that happens, memories of water quality and quantity and associated issues will fade into obscurity as the wilding tree transforms the natural beauty of this barren but passively elegant landscape.

It will become yet another casualty of the seed spread and the downpour, predicted and largely ignored by the authorities such as Doc and regional councils for so long. So let’s not blame natural events for doing what comes naturally to them.

This article serves as a reminder as to why we must not trust farmers and politicians to protect our natural flora and fauna. The author has mocked the seriousness of the global crises we face and instead taken a few facts out of context and twisted them into what can best be described as farmer logic.
Since the arrival of humans in NZ animals have been hunted to extinction and natural landscapes replaced with exotic trees and livestock. The solution to reversing the harm done to the natural ecosystems is NOT MORE sheep and cows. We must seek to rewild and restore the natural balance that commercial forestry, agriculture and short shighted politicians have helped to destroy.