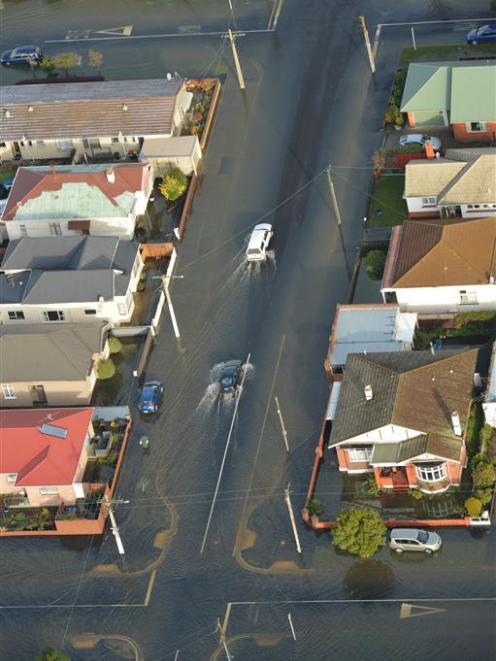 Flooding in South Dunedin last June. Photo by Stephen Jaquiery.
The future of South Dunedin is not up for debate. It is a valuable part of Dunedin, just like any other region of the city, Andrew Whiley writes.

It is amazing how the future of South Dunedin has become such a political issue since the flood of June 3, 2015.

If you listen to some, the area is almost a no-go zone with little potential for investment and development due to its label as a high risk area for sea-level rise due to climate change.

I personally believe this region of the city needs some love.

It is a great community, with a vital shopping area, wonderful schools and proud citizens.

It is a valuable area that just needs attention with the appropriate investment in services and maintenance.

In my opinion, the flood of June 3 was exacerbated by the poor maintenance of the mud tanks and the issues around the Portobello Rd pumping station.

The mud tank report has yet to come to the council but any resident in the area will tell you there was an issue with maintenance.

The Portobello Rd pumping station should have been able to cope with the water volume, as it had capacity to handle up to 19mm of rain per hour and we maxed out at 12mm per hour on the day of the flood.

According to the ODT, (13.6.15): "Attention would initially focus on the Portobello Rd pumping station, which was designed to pump storm-water through a nearby outfall into Otago Harbour. The network near the pumping station appeared to have ‘a potential bottleneck' which may have slowed the flow of water into the pumping station, thereby prolonging flooding,'' according to Laura McElhone, DCC group manager of water and waste.

Another ODT article (27.11.15) stated: "A council report, released yesterday, confirmed a partly blocked screen at the Portobello Rd pumping station prevented the facility operating at full capacity to drain floodwater from South Dunedin streets. The station has operated at only two-thirds capacity for much of the downpour, meaning floodwater was nearly twice as deep on average and took longer to drain away.''

The questions I raised at the council on November 30 asked why the lowest parts of South Dunedin, identified in the BECA report as parts of Tainui, didn't flood, compared with the areas of St Clair and around Forbury Park.

No-one was able to give me an answer.

Those in the flooded areas advised me a lot of the surface water disappeared quite quickly, on June 4, which coincides with the Portobello Rd pumping station screens being lifted and cleaned.

This leads me to believe there was definitely more to the flooding than just a freak storm and climate change.

Then along comes a report by the Parliamentary Environment Commissioner, Dr. Jan Wright, which showed that 2683 Dunedin homes were at risk from sea-level rise, mainly in South Dunedin.

On June 17, 2015, Chris Morris of the ODT reported: ‘‘South Dunedin is a suburb under siege by Mother Nature - battered by ocean waves, floods, a rising water table and with the dark clouds of climate change predictions building on the horizon. So is it time to head for the hills? Dunedin Mayor Dave Cull believes South Dunedin is at a crossroads and it is time to start considering the ‘end game'.''

When I talk with the old builders who were building homes in the 1950s and 60s, they tell me they consulted tide tables to see when they were going to dig foundations.

According to these veterans of the area, very little has changed.

No, we don't need to consider an end game.

What we need to do is look at the area in its entirety.

This council is looking at the area only because it has been forced to deal with it.

I think many previous Dunedin councils didn't see a problem, so never spent any money on the area.

This lack of investment (or community love) is now catching up to us.

With regards to the sea wall at St Clair, I believe we have discovered that the incorrectly designed, cheaper wall option is now causing problems coupled with the lack of the silt/sand flows due to the damming of the Clutha River.

The improved chambered sand-sausages will soon be in place to protect the toe of the sand dune between the seawall and Middle Beach until research and feedback from the smart minds currently researching longer term solutions is received.

I do hope that we don't repeat the nine reports that went to the council in 1899 (Our St Clair, A Resident's History, by Barbara Newton).

Unfortunately, there will be some cost to all Dunedin ratepayers for the infrastructure improvements and maintenance required throughout South Dunedin.

We shouldn't be considering abandoning the community or its residents.

Similarly, costs to upgrade the seawall and stabilise the sand dunes along our beaches will need to be shared by everyone, but really all we are doing is showing some love to an important part of the city so it can have the opportunity to prosper for the next 100 years and beyond.